END_OF_DOCUMENT_TOKEN_TO_BE_REPLACED

This post was written in conjunction with an ISA co-hosted webinar on large project execution. The ISA webinar focused on common problems with executing automation scope in large projects, and solutions proven to be effective. Click the red arrow in the graphic below to watch the replay.

Driven by a desire to reduce risk with large projects, many owner organizations utilize a strategy where an EPC (engineering, procurement, construction) company is sole-sourced to manage and execute the entire scope. While EPCs are well-suited to execute the civil and mechanical scopes that make up most of the cost in a large project, they often struggle when it comes to process automation. This only makes sense – you are more proficient at what you do the most.

Unfortunately, the EPCs lack of automation proficiency gets multiplied in the third-party suppliers and control system OEMs (original equipment manufacturers) that the EPC manages due to insufficient definition of requirements.  Automation specifications set by the EPCs are often boilerplate documents lacking the necessary detail to ensure proper integration with the overall control system.

Third-party suppliers prefer to provide their standard automation package, which is rarely the best solution to integrate into the overall control system.  Control system OEMs need exact definition for both the system and configuration requirements (functional specifications) in order to effectively utilize their offshore low-cost engineering centers which don’t deal well with ambiguity. EPCs don’t have the specialized platform knowledge needed to define hardware requirements and the EPC process engineers do not speak the automation configuration language the OEM programmers need to perform their work effectively.

The result of this traditional large project execution model is a minimally compliant automation system lacking key functionality and onerous to test, commission and start up. With the automation system being the “brain” of the plant, these shortcomings severely impact the overall productivity, quality and safety of the completed asset. In addition, poor execution of the automation scope results in cost overruns and schedule delays – precisely the outcome the owner organization is hoping to avoid.

To overcome the shortcomings associated with the traditional approach, many owners have learned that utilizing an automation owner’s representative provides tremendous value. This entity serves to ensure the automation scope performed by the various parties will result in an integrated, high-performing control system.  The role can be filled by a specialized automation engineering company or by the owner’s internal automation SMEs (subject matter experts).  Unfortunately, most customer organizations are not staffed to take on this role as they are asked to do their work with fewer personnel and would be overwhelmed by the demands of executing a large project in addition to their normal jobs. 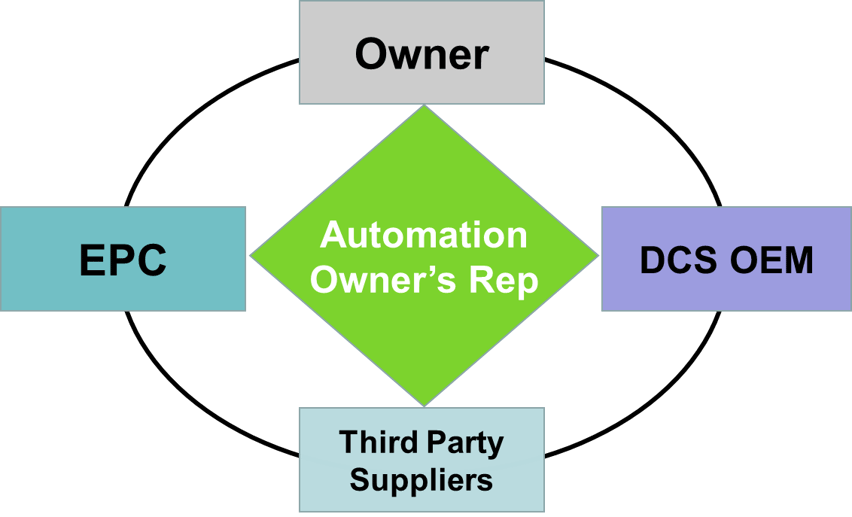 An automation owner’s representative mitigates the weaknesses inherent in the traditional execution model by utilizing automation experts where they can provide the most value. Although the exact role will vary depending on the situation, it ultimately comes down to acting on behalf of the owner to ensure all parties provide a cohesive automation system that meets or exceeds project requirements, customer and industry standards, and industry best practices. This is done by developing (or providing input to) the automation specifications for all suppliers and overseeing the resulting deliverables to ensure compliance with requirements.  This includes participating in the testing, commissioning and startup of the automation system to ensure compliance with requirements.

Engaging a qualified automation owner’s representative who is responsible for the overall automation scope will ensure prompt and thorough definition of requirements, hold the various parties accountable to deliver against those requirements, and result in an automation system that enhances the performance of the completed asset while meeting the project execution goals. Truly a better way!

Lee Swindler is a program manager with MAVERICK Technologies. Lee has over 28 years of automation industry experience including 21 years in the manufacturing process industry and seven years on the engineering services side. He holds a Project Management Professional (PMP) certification along with being a TÜV Certified Functional Safety Engineer (FSEng). Lee has a B.S.E.E degree from the South Dakota School of Mines and Technology.