END_OF_DOCUMENT_TOKEN_TO_BE_REPLACED

This post was authored by Paul Hodge, Honeywell HPS product manager at Honeywell.

The process industries officially welcomed virtualization into its vocabulary about a year ago. So can anybody really describe what it is yet?

To best understand the complexities of virtualization as it applies to processing facilities, it is best to first have a clear understanding of the challenges it can solve.

For starters, many plant operators today are burdened with maintaining separate servers to support multiple applications and perform various functions within their plants. Each server required is an incremental burden to plant operations due to the maintenance and space required, as well as in the amount of power and cooling needed. On top of maintaining their fleet of machines, facilities must also deal with constant hardware and operating system (OS) upgrades, complications in system management, operational pressures to reduce overall total cost of ownership, and lower staffing levels.

Because of these issues, reducing the number of servers required for plant operations has become a priority-with each server that is removed, maintenance and operational costs also decrease. But they cannot be removed at the expense of overall plant reliability.

Here is where virtualization comes into play-by tapping into the large amount of unused resources in today's servers by allowing multiple operating systems and applications to be run at the same time. In basic terms, virtualization is taking one of these physical servers and splitting it up into many virtual servers.

The process of virtualization works by inserting a thin layer of software called the hypervisor directly into the computer hardware. The hypervisor layer presents multiple sets of "virtual hardware," which contain the same components as a regular machine (e.g., motherboard, chipset, etc.). To an operating system, virtual hardware is indistinguishable from a regular machine. 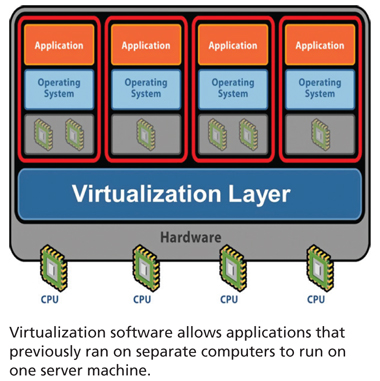 As such, this approach has produced four key advantages that are catching the attention of global manufacturers:

Manufacturers of PC hardware face consistent pressure to improve machine performance in a competitive market. Application performance needs have increased as well, but at a slower rate than PC performance growth, resulting in an increasing underutilization of machines. This spare capacity can be used to perform other tasks. One method to leverage this capacity is to run multiple applications simultaneously within an OS. However, this can result in scope of loss issues and conflicts from a performance or compatibility perspective with other applications.

By utilizing virtualization, multiple virtual machines can be operated at the same time on a single physical machine with their own dedicated OS and application environments. This is achieved while guaranteeing each virtual machine receives adequate resources to perform its given tasks and ensures the virtual machines remain isolated from one another. Through this consolidation, hardware resources are maximized, and the need for multiple physical machines is mitigated. Furthermore, with reductions in servers, there is a corresponding reduction in space, power, cooling, and maintenance, reducing plant running costs.

Virtualization also allows plants to undertake expansions without adding new hardware. Virtual machines can continue to be added to physical servers as long as there are sufficient resources available to meet their operational needs.

Since multiple applications run in the same computer hardware, they can communicate with each other within the machine, increasing performance. This also eliminates networking hardware, including switches and routers.

A challenge plant operators and manufacturers often face is disconnect between the fast-paced, technology-driven world of hardware and OS manufacturers, and that of process control operations-a world that operators often prefer to remain unchanging. Plant managers are resistant to making changes to a plant's core assets due to the high cost of overhauls, especially when these overhauls are not on their own terms.

On top of that, it can be difficult for plant managers to see the immediate return on investment (ROI)/tangible benefit for their facility by taking on OS or hardware upgrades. They understand the need to ensure hardware reliability and the ability to receive support on the operating systems. However, this is viewed as an unnecessary disruption that may have an impact on plant output for little business return.

Virtualization helps reduce the strain on industrial facilities by allowing existing hardware to be maintained for as long as it is able to provide the minimum levels of performance an application requires of a virtual machine. By sticking with existing hardware, plants can reduce the cost of system upgrades. They can also stay on the same operating system for a longer period of time since the ability to run on a physical piece of hardware is no longer dependent upon the underlying hardware itself, but rather on what the virtualization environment can support. 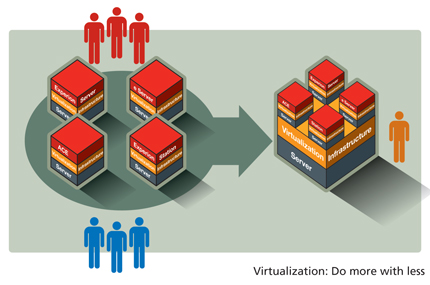 Virtualization minimizes the disruption to plant operations when hardware changes are required by avoiding the need to reinstall an OS. Thanks to more advanced virtualization features, a computer's operating system and applications do not need to be shut down during a hardware replacement. Operations can continue without interruption while this work is taking place.

Virtualization supports a strategy of "build once, deploy many." It enables the hardware configuration, OS, and application to be contained in a single "capsule." Any new instance of this capsule is exactly the same, thus reducing configuration errors and installation time and ensuring a more reliable and repeatable result. The time taken to deploy a new node is measured in minutes rather than weeks for a traditional deployment.

Virtualization offers improved diagnostics, which allows operators to monitor system performance and access the desktop of any node. Health and status information can be viewed from a single, integrated user interface. Operators have the ability to stop, start, and restart a node from this same interface.

Remote management is significantly simplified. Whereas a physical system requires a dedicated remote desktop and management functions, these capabilities come for free by having remote access to the virtualization console.

Virtualization provides a new and rich set of capabilities for protecting control rooms that were never possible before: setting up disaster recovery plans, testing those plans, executing failover when a control center disaster occurs or as the event requires, and failing back to the primary control room. This makes it possible to provide faster, more reliable, and more affordable disaster recovery protection.

Virtualization also helps applications achieve higher availability than they would be able to natively support. For example:

For example, Honeywell Specialty Materials successfully applied virtualization technology at its Geismar, La., facility where it was looking for a way to downsize its infrastructure and maintenance costs, while also reducing power consumption. Virtual computer systems were initially used for off-line testing and development. However, once the success of this project was realized, the plant's Operator Training System (OTS) was also virtualized and deployed in a production environment.

In addition to the Off Process Development and OTS system, all four of their Advanced Process Control applications were installed on four virtual servers. Their associated maintenance and development applications were added on two additional virtual computers. All six virtual machines (VMs) were then loaded on a single physical server running VMware vSphere virtualization platform.

Now into its second year, these controllers have been successfully operating in a true virtual environment, experiencing some of the many benefits of virtualization technology including:

In today's plants, operators are challenged with the overwhelming task of doing more with less-reducing operating costs while maintaining or even increasing production levels. On top of that, they are bringing on new projects faster while attempting to keep the cost lower. Manufacturers have to identify potential waste at each level of their operations to ensure plants are operating as efficiently and cost effectively as possible.

Virtualization helps plants achieve the goal of maximizing ROI by improving the utilization of their control system server assets. Operators can use this technology to decrease underutilized server space while consolidating the physical size of their operations, mitigating the disruption that comes with hardware upgrades, and overall making systems easier to maintain. Virtualization provides an efficient, cost-effective, and secure solution that increases reliability for customers striving to reduce operating costs while ensuring the safety and productivity of their plant is maintained.

About the Author
Paul Hodge is the Honeywell HPS product manager responsible for the Experion Server along with other Experion infrastructure items such as Virtualization and OPC. He has been with Honeywell for 16 years and during this time has had exposure to a range of different industries along with most of Honeywell's DCS and SCADA systems.