Six Emerging Trends in the World of Industrial Robotics

END_OF_DOCUMENT_TOKEN_TO_BE_REPLACED

Six Emerging Trends in the World of Industrial Robotics

This article was written by Nick Chambers of KUKA Robotics. Nick formerly was global editorial manager at ABB Robotics.

Over the past several decades robots have gone from incredibly expensive machines with limited functionality to modern industrial robots that are flexible and can be applied in a broad range of applications to do amazing things, offering a high return on investment (ROI). It is always hard to look into the future, but if one thing is certain it is that robots will be an integral part of that future, entering parts of the economy that a few years ago we could only imagine. Here are six emerging trends in the world of industrial robots that will likely have a big effect on a wide variety of industrial sectors and provide benefits well beyond what was once considered possible.

Easier to use, deploy, and maintain

The automotive industry has a long history of using robots, but for industries that are relatively new to automation, programming robots can be a challenge. We need to find ways to make robots easier to use, so that they do not require such a highly skilled workforce to deploy, operate, and maintain. In fact, this question is one of the largest technical challenges the industry is currently grappling with. 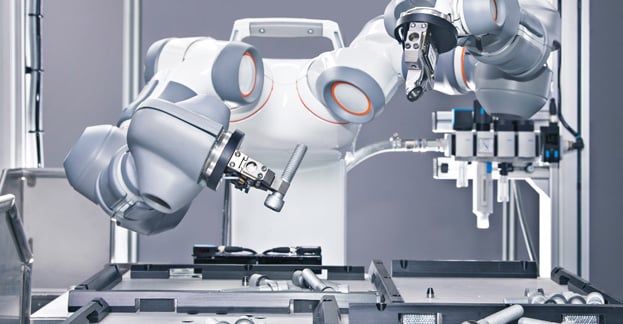 As more and more companies find that robots are affordable, it is clear that one of the final barriers to adoption is the perceived complexity of programming and designing robotic systems. We feel very strongly that a “what you see is what you get” (WYSIWYG) programming interface is one of the main ways to overcome this barrier.

Visual offline programming software continues to make the design and commissioning phase much simpler than in the past. When combined with an increasing number of standardized off-the-shelf modules for the most popular robotic applications, such as machine tending, offline programming can be harnessed for maximum efficiency and provide the fastest time to the start of production. The most advanced software provides WYSIWYG programming with near perfect accuracy when installing a virtual creation in the real world.

In addition, we will increasingly see robots that can program themselves. At present, most robots need to be trained and programmed in a unique way for each installation. There will be sensor technologies, such as vision and force-sensing, playing a bigger role in helping robots do this. Robots will also continue to evolve to meet the needs of nonautomotive industries. As new applications of robots emerge in new industry segments, features such as accuracy, stiffness, weight, speed, and cost will evolve alongside them—some increasing in importance and some decreasing in importance based on the industry.

Close collaboration between humans and robots, working as colleagues on assembly lines and in other applications, will be a large part of the future of industrial robotics. In fact, there may be a time when the line between what is made by a human and what is made by a robot is blurred to the point of becoming indistinct. This will be especially pronounced during a transition phase when robots are still incapable of perfectly reproducing human dexterity, but have enough dexterity and ability to work with delicate objects that they can take over some jobs that currently require a human touch. The growing need for small-parts assembly is a perfect example, with the electronics market leading the charge.

The industry, working with lawmakers, regulators, and the insurance industry around the planet, needs to agree on ways to mitigate the inherent risks of human interaction with robots. Specifically, new and stronger global standards need to govern this interaction, with creative ways to mitigate risk.

Dual-arm robots coming to market are intended to work on a production line in the electronics industry, alongside human coworkers. These robots are designed to be intrinsically safe, which means they cannot hurt a coworker. They use force sensors to detect changes in the force applied to them; the axis is designed to eliminate all pinch points; they have speed-limited motors; and they rely on software governing safety. All these features result in robots that have the most minimal risk of doing any kind of harm when coming in contact with a human being. In addition, padding can be incorporated for additional safety.

These robots will increase the flexibility and agility of manufacturing systems. Because a robot is compact, portable, and designed to occupy the same working space as a human, it can be easily interchanged with a human. The robots can be easily trained on a process and placed on a production line in place of human workers. This allows a manufacturer to adapt quickly to changes in production schedules. The robot can also be dedicated to tasks where human workers are required to work in confined spaces. The use of such collaborative robots will grow significantly in the future. But safety will be vital for collaborative robot operation, because the robots will work in close contact with humans.

In addition to new robot designs, there is plenty of opportunity to make existing six-axis articulated robots certified for collaboration. By combining advanced safety software with speed-limited motors and force control and padding on the robot exterior, the future of human-robot collaboration is just around the corner.

New ways to work with robots

We envision a future in which companies that depend on robots will be able to manage them and the teams that rely on them from any device, anywhere with an Internet connection. This simplifies all stages of robot interaction: design, sales, installation, commissioning, operation, oversight, and service.

The future of robotics is closely tied to two aspects of connectivity that the entire industry is focusing on. The first relates to the application of connectivity to remotely monitoring robots. For example, our company currently remotely monitors robots in real time. We help to identify potential issues so that they do not disrupt normal manufacturing operations. This also helps users optimize their processes. For instance, we can detect if a robot needs service or an upgrade, and we can also analyze movements for efficiency. Users can choose to resolve the issue over the phone or to have a technician visit the production plant. This helps us better support trouble-free manufacturing with no loss of production time.

The second key piece of the technical challenge puzzle involves the tools that allow robots to interact with the world around them, including advanced sensing and advanced gripping. In order to allow robots to do all the jobs that they are well suited for, they will need to develop more “human-like” abilities to find, identify, and manipulate objects. 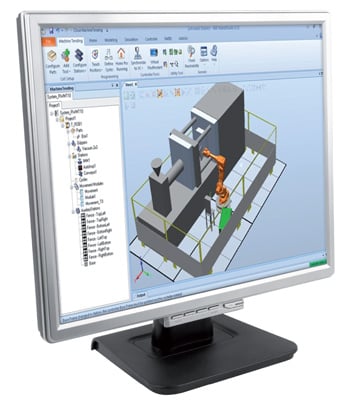 When combined with powerful processing capability, tools like force control and advanced 2-D and 3-D vision will create a kind of robotic “independence” and allow the robot to make “decisions” about what to do when it encounters the inevitable hiccups that arise in everyday operation. A new generation of integrated force control and integrated vision available today makes these advanced technologies available to more and more end users.

Robots are certainly capable of very precise and repeatable movements. However, when it comes to things like small-parts assembly, all that precision is useless without the ability to handle tiny objects with dexterity. In this regard, we need end-of-arm tooling that mimics the human hand as much as possible with its touch, flexibility, care, and speed.

Today’s industrial robots can do amazing things and offer a quick ROI. Robots have also reduced injuries in the workplace, increased the competitiveness of companies in a fierce global market, elevated the quality of affordable products, increased profits for countless businesses, and created a whole ecosystem of high-paying and rewarding jobs.

Based on a huge body of evidence, experience, and common sense, it is clear that the companies that adopt robots realize huge financial benefits. More than any other action businesses can take, integrating robots can increase productivity, reduce overhead, provide flexibility, reduce waste, and increase quality—in some cases improving these metrics by orders of magnitude.

Training robot employees of the future

Industrial robots have created a new ecosystem of high-paying and rewarding jobs. Designing, building, marketing, selling, installing, operating, and maintaining robots creates jobs that did not exist before robots. The jobs this “robot ecosystem” creates are typically high paying and rewarding and come with good levels of benefits.

A February 2013 International Federation of Robotics report touches on some of these topics and highlights the fact that from 2000–2008 the robotics industry created 8–10 million new jobs, either directly or indirectly. That is more than 1 million jobs globally per year. Although the economic recovery stalled job growth on all fronts, the prediction is that between now and 2020 another 4 million jobs will be created in the “robot ecosystem.”

So although it is true that the old manufacturing jobs are disappearing, it is also true that the required manufacturing job skills of the future will be more high tech and demand an understanding of automation. In the U.S., even though there are more jobs available every day, employers are having a hard time finding qualified candidates. In the high-tech world (including that of robots), this is often because training of personnel for the needed job skills is hard to find. Instead of fighting about the fact that some of the worst jobs on the planet are going extinct, let’s celebrate a future with better jobs. ABB Robotics and others have robot-related training facilities around the world. When helping our children pick what to study in school, and even what type of school to go to, let’s tell them what the jobs of the future will be, so they can make wise decisions. 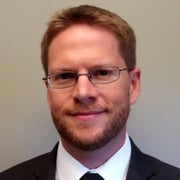 Nick Chambers is the global content and social media manager at KUKA Robotics.  He formerly was editorial manager at ABB Robotics. Chambers spends his days researching robotics and following the trends of the future. Before joining ABB he was an automotive journalist, with his work appearing regularly in several well-known outlets including The New York Times, Scientific American, and Motor Trend.