END_OF_DOCUMENT_TOKEN_TO_BE_REPLACED

This guest blog post is part of a series written by Edward J. Farmer, PE, author of the new ISA book Detecting Leaks in Pipelines. To read all the posts in this series, scroll to the bottom of this post for the link archive.

One of the earliest versions of our modern leak-detection concept went to Bahrain for the pipelines that connected the Caltex refinery in Manama with their source of crude in Saudi Arabia. Due to an earlier incident that had hit the economics and convenience of life in Bahrain pretty hard the Emir asked Caltex to ensure any future leaks were promptly detected and quickly mitigated. After some local development work by the technical staff at the refinery Caltex in Dallas, familiar with my work from some Chevron projects, asked me to see what this new technology could do in the Bahrain situation. I deployed a test system to Bahrain and we spent a few days preparing for and testing a battery of leaks at various locations and of various sizes. This was a huge opportunity to explore and report the capabilities of this new technology. It was quite an adventure and a very successful suite of tests.

I was quite thrilled, all these years later, to receive a note from the now-retiring engineering manager of the refinery who remembered the day as poignantly as I did. It had been 30 years since we’d talked but his note brought the project back to me like it was yesterday:

My name is Mark Wessel and we met in the '80s when you came to demonstrate your "magic" technology on our "A/B pipelines bringing crude from Saudi across the 20 km stretch of the Gulf and Bahrain Island to the Caltex refinery.   I was engineering manager and we had been trying to develop a workable leak detection scheme for those 50 year old lines for several years, but did not believe the SCADA-type schemes we had come up with would do the job; the only thing certain was that we would spend huge sums of money and still not catch a large leak until it was a disaster – particularly in the housing areas that had built up around the lines.   We were very frustrated when, finally, Caltex-Dallas told us about your scheme and said they were sending you out. I was a skeptic about this "black magic" until we ran those first trials, which literally blew us all away in amazement. Anyway, we installed the scheme and the operations people took to it very quickly. In later years as I returned on visits I would check to see how it was working. I found that the next generation of operators did not even know about the system — they only knew they had a read-out that would alarm if there was a leak. They trusted it because one of the engineers would test it once in a while.   I left Caltex shortly thereafter for Korea where I joined some friends in what eventually became GS E&C. However, I never got over my profound respect for your technology and passed it on to anyone who would listen. The reaction was generally the same as mine when I first heard of it; however, your system became very well known very soon so it became very easy to find good industry references when I would relate my Bapco experience to others.   I am now retired and returned to the USA after 50 years away, but still do a bit of consulting and happened to mention your system to some folks here in Abu Dhabi that were speaking of some schemes for a long resid pipeline. It caused me to again look up the references and get them up to speed. And, that caused me to recall our meeting in Bahrain and good meals and great discussions.   I hope this finds you well and offer you my best wishes for the future.   Best Regards, Mark Wessel

At a time when detecting even large leaks within the same day was challenging, often resulting in the first indication being large slicks of oil fouling shorelines and boats, anything that could detect small leaks at all, and any leak quickly, was pretty exciting. The results Mark is talking about are summarized thus: 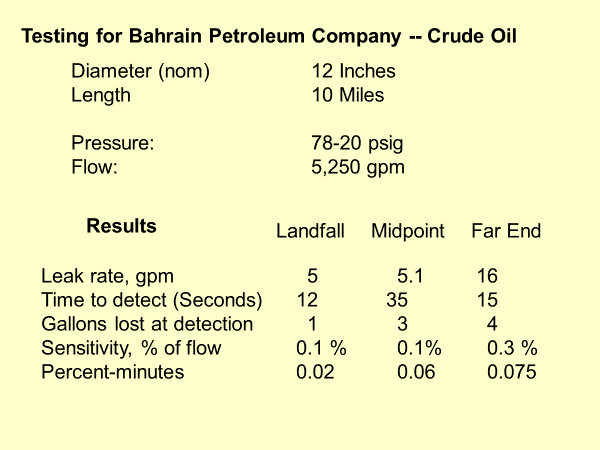 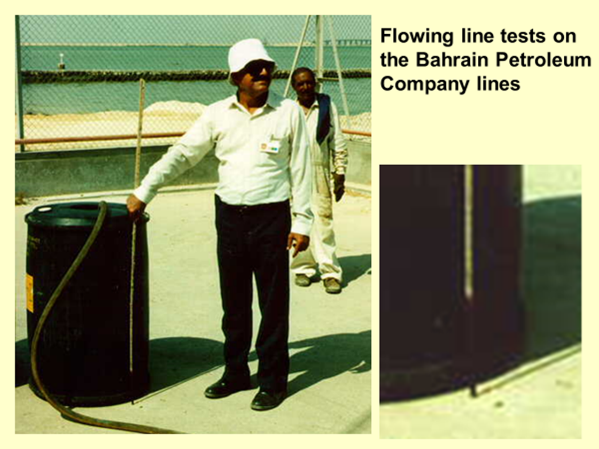 The data in the table show a sensitivity of 0.1 percent of flow and detection times less than a minute. At a time when detecting even large leaks within the same day was challenging the numbers were impressive, but emotional impact for those involved was driven home by Ali Juma, using a dipstick to display the sum of oil that had leaked from the line during the first morning’s tests. I had a great day remembering that special one, and concluded my reply to Mark with:

If I had to pick a single day that product launched on the world stage it would absolutely be that one in Bahrain. By that time we had it running on several shorter and simpler lines, including some Chevron offshore platforms. We had a good understanding of what it could do and how to ensure successful applications, but this was the first big international effort. I will always be grateful to Caltex for the opportunity and for all the help and hospitality afforded to us by BAPCO. Again, thanks for the note – it made for a great day for me!