END_OF_DOCUMENT_TOKEN_TO_BE_REPLACED

The following insights are part of an occasional series authored by Greg McMillan, industry consultant, author of numerous process control books and a retired Senior Fellow from Monsanto.

Corn is the highest cost factor in ethanol production. The addition of three PID controllers in an ethanol plant can improve yield and the ability to match front end production to back end purification. These controllers can make the most out of online and off-line analyzers providing recognition 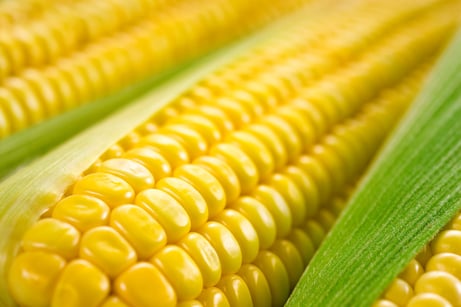 and reduction of the sources of variability.

Yeast fermenters to produce ethanol traditionally only have temperature control. The subscribed permissible pH range is quite large (e.g. 4 to 6 pH). These fermenters typically don’t have pH control. A gradual decrease in pH during ethanol fermentation is normal due to acetic acid and lactic acid formation. A greater than normal drop in pH is indicative of a bacterial contamination so pH may be monitored. The main opportunity for maximizing production is taking advantage of a decrease in the time to reach the desired alcohol batch concentration endpoint. The inhibition effect of alcohol concentrations above the endpoint dramatically slows down and suspends further conversion to alcohol. Consequently, longer batch times do not translate into greater ethanol concentrations.

Production rate can be increased by reducing the batch time to when the endpoint is reached. An online near infrared analyzer or an at-line chromatograph can provide a measurement of ethanol concentration. Most batch cycle times are much longer than the average time to an endpoint because of the variability in time to the endpoint. If batch cycle times are fixed, a consistent early endpoint can be used to reduce corn feed rate to improve ethanol yield, which is typically expressed as gallons per bushel. Corn is the largest cost for ethanol production. An improvement in yield taken as a decrease in corn feed rate significantly decreases cost and decreases the carbon footprint, which increases revenue.

The causes of changes in production of the ethanol are often unknown. Corn quality may be the biggest unknown factor. Front end production may be the bottleneck or may not be coordinated with back end purification. The solution and resulting optimization involves a simple addition of PID controllers. See Greg McMillan's new ISA book Advances in Reactor Measurement and Control for an extensive view of practical opportunities for designing control strategies to achieve product quality and maximize yield and capacity in different types of fermenters, bioreactors, and chemical reactors. 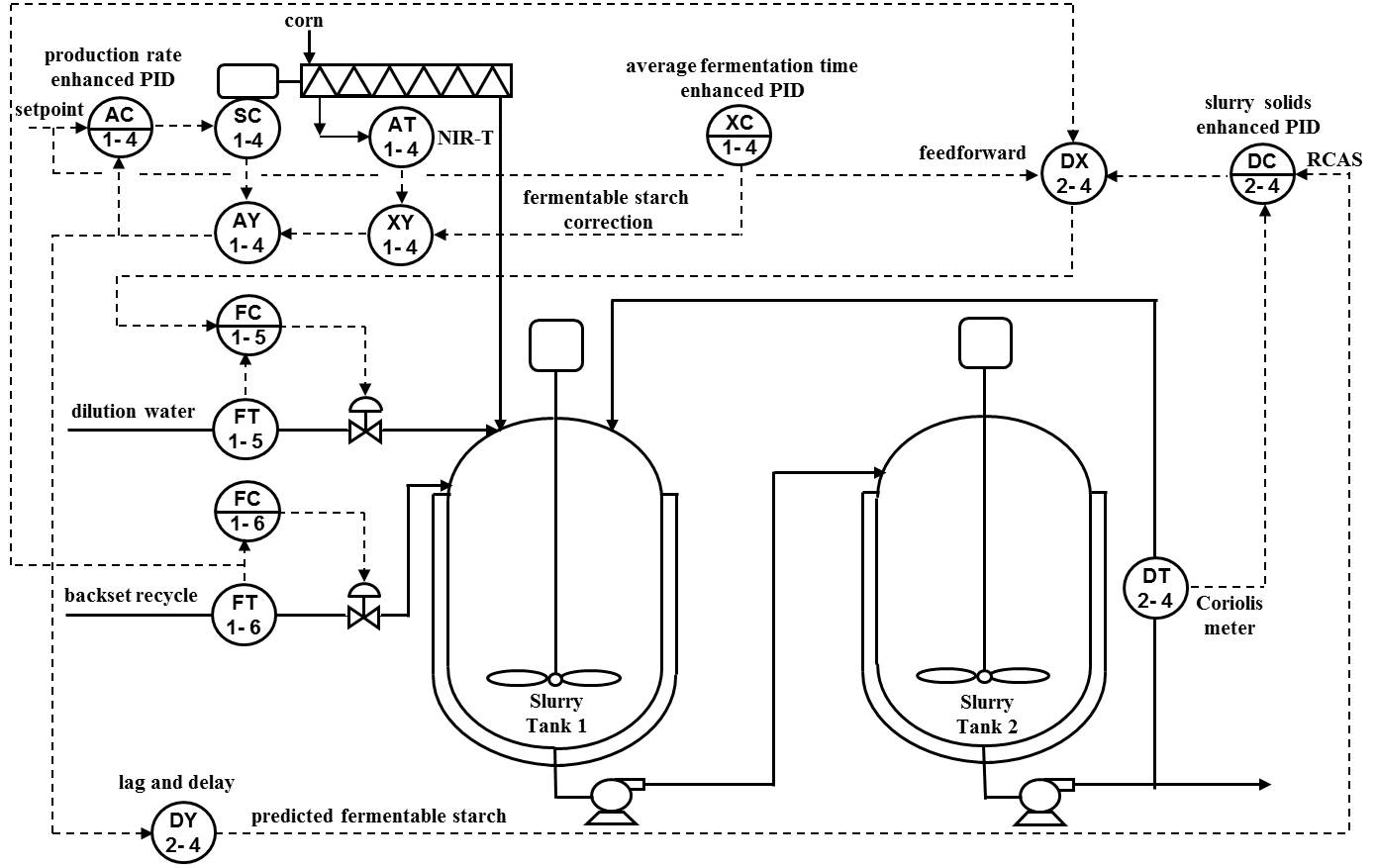 Insight: Ethanol plant yield can be increased by the use of an at-line corn feed analyzer and enhanced PID to optimize corn feed rate, slurry solids concentration, and batch time.

Insight: Enhanced PID controllers can optimize ethanol plant yield by the use of at-line analyzers.

While the use of at-line analyzers is described, if only off-line analyzers are available, the same strategies can be used with minimal tuning correction. The enhanced PID controller will be stable if the PID gain is simply reduced by a factor of despite a variable and large analysis cycle time. The downside is that changes in front end will not be detected quickly and corrective action will be delayed and be more gradual.

The first enhanced PID AC1-4 controller is on the first slurry tank. The PID is a production rate controller with its PV and SP scaled to ethanol production rate. The PV is computed based on corn feed rate and the percent of fermentable solids, with an inferential prediction of ethanol yield being provided by an at-line analyzer taking corn feeder samples. External reset feedback (Dynamic Reset Limit) is enabled so that the PID does not try to drive its output faster than the corn feeder can respond. The output of the PID manipulates corn feeder speed. For an increase in the inferential prediction of yield, the PID will immediately cut back on corn feed rate, reducing corn use. The simple change of the PID setpoint enables operations personnel to change front end production to match the back end separation and purification capability.

Insight: An enhanced PID uses as its controlled variable a front end production rate prediction computed from corn feeder speed and an at-line corn analyzer prediction of yield. The PID can immediately translate an improvement in corn yield capability to a reduction in corn use.

If the change in analyzer output from the last significant change is less than the threshold sensitivity setting of X gpm for production rate, there is no update to the PV and no change in PID output. Since the PID will wait till the effect of its feedback correction is seen and will ignore noise, the PID gain can be set equal to the inverse of the process gain to provide a full immediate correction in feeder speed to a significant new analysis result or a new production rate setpoint.

In order to prevent an oscillatory response from this great increase in gain, the reset time must also be decreased to be about equal to the loop dead time. This decrease in reset time is counterintuitive because normally one would think of increasing the reset time to suppress oscillations. The increased reset action suppresses the proportional step when the measurement is reported as returning to setpoint.

Changes in analyzer sample time or communication latency do not affect the tuning because PID action is suspended until there is an update. For changes in predicted yield (fermentable starch), the PID makes a single adjustment in corn feed rate bringing the production rate back to setpoint. The figure also shows that production setpoint changes can be easily made to match corn supply, market demands and back end capacity constraints.

Insight: An ethanol plant production rate controller can make a single correction for an at-line analyzer update of a change in corn yield that will return the production rate to setpoint. The immediate and nearly exact correction is the result of being able to set the enhanced PID gain to be the inverse of the open loop self-regulating process gain.

The second enhanced PID DC2-4 controller is on the second slurry tank. This PID is a slurry solids concentration controller with its PV and SP scaled to be 0-40% weight percent fermentable solids. Slurry solids concentration is inferred from a Coriolis meter density measurement in a recycle stream. The output of the PID manipulates the dilution water to the first slurry tank. Since the manipulation is to the first slurry tank while the solids being controlled are in the second slurry tank, there is an equivalent dead time from the residence time of the two slurry tanks plus mixing and injection delays.

A feedforward signal is computed for the dilution water based on corn feed rate, steam injection, and backset recycle. To ignore feedforward timing errors, an update time of 12 seconds is set on the inferential measurement of fermentable solids. A dead time block in the external feedback path from the analog output to the PID provides dead time compensation. A threshold sensitivity setting is used to ignore measurement noise.

Since the PID compensates for dead time, ignores noise, and waits out feedforward timing errors, the PID gain can be increased to provide a faster setpoint response. The feedforward signal from the change in Slurry Tank 1 prevents the changes in production rate from affecting the solids concentration in Slurry Tank 2. The feedforward signal is the production rate setpoint minus the water flow from other sources such as backset. The remote cascade (RCAS) setpoint is the desired solids concentration multiplied by a fermentable starch factor predicted by the corn analyzer. The prediction passes through a delay and lag set equal to the dead time and residence time, respectively, so the change in setpoint coincides with the change in solids measurement from a change in corn feeder speed from the production rate controller.

Insight: An enhanced PID for slurry solids control in the front end of an ethanol plant is improved by addition of dead time compensation, a feedforward of dilution water and steam injection rate and a correction of setpoint based on corn feeder speed. The PID uses a Coriolis meter in a slurry tank recirculation line to provide an inferential measurement of percent solids.

The HPLC provides an inferred measurement that is a running average of the fermentation time (batch time to ethanol endpoint) in the most recent SSF batches. When the HPLC indicates that the ethanol has reached the desired endpoint, the running average of batch times is updated. Note that the actual batch cycle time is fixed. The average is the time to the desired endpoint.

Insight: An enhanced PID controller can gradually correct the inferential prediction of ethanol yield used by the front end production rate controller by averaging the time that fermenter batches take to reach the desired ethanol endpoint.

All of these improvements can be explored, prototyped and tested by means of a high fidelity dynamic simulation of bioreactors I developed running much faster than real time that is easy to setup and use.

The addition of PID controllers for front end production rate, slurry concentration, and average fermentation time can decrease the cost and increase the production rate of an ethanol plant. Take advantage of this opportunity by learning about the use of an enhanced PID and a high fidelity model that are easy to configure.

Gregory K. McMillan, CAP, is a retired Senior Fellow from Solutia/Monsanto where he worked in engineering technology on process control improvement. Greg was also an affiliate professor for Washington University in Saint Louis. Greg is an ISA Fellow and received the ISA Kermit Fischer Environmental Award for pH control in 1991, the Control magazine Engineer of the Year award for the process industry in 1994, was inducted into the Control magazine Process Automation Hall of Fame in 2001, was honored by InTech magazine in 2003 as one of the most influential innovators in automation, and received the ISA Life Achievement Award in 2010. Greg is the author of numerous books on process control, including Advances in Reactor Measurement and Control and Essentials of Modern Measurements and Final Elements in the Process Industry. Greg has been the monthly "Control Talk" columnist for Control magazine since 2002. Presently, Greg is a part time modeling and control consultant in Technology for Process Simulation for Emerson Automation Solutions specializing in the use of the virtual plant for exploring new opportunities.