Reflecting on an Automation Career

END_OF_DOCUMENT_TOKEN_TO_BE_REPLACED

Reflecting on an Automation Career

This is my 25th, and last, guest blog post. It has been an adventure! The original intent was to introduce my then-new ISA book, Detecting Leaks in Pipelines, and it seems to have done that. Additionally, though, thinking through and writing blog posts has motivated new perspectives about “neighboring subjects,” all promoting some not-to-be-missed experiences.

I became an International Society of Automation (ISA) member in 1972. The organization was just one year older than I was. In those days, there was an effort throughout American industry to automate and optimize. I was active in the promotion and leadership of my ISA section at the time, and I began writing about my experiences. The exposure was good for me professionally, but more importantly, it developed and increased understanding of projects, their basis, and the hopes for them. I became an ISA senior member in the early 1980s, about the same time I began doing automation work in refineries and manufacturing plants with complex and configurable processes. It was exciting, satisfying, and always motivating of creativity—thinking outside the box and wondering what a more optimal box might look like.

Today, I am reminded of the recession of the early 1980s that hit industry—and developments in it—quite hard for a period of years. A lot of motivation during that troubled period drove the effort toward “new” and “better.” American industry emerged in the mid-1980s even stronger and wiser. There is an “other side,” as long as there is motivation to find—and energy to explore—the possibilities.

In 1984, Fred Cushing, the then-new ISA publications director, motivated me to write my first ISA book, Modernizing Control Systems. He also promoted instrumentation and control educational classes and training materials for those in industry struggling hard to get their mind around all this new control stuff.

A young person entering any field needs mentors, and I was so lucky with the ones who helped me. My major professor, Dr. Saad Amer at California State University Chico, did a fantastic job of working me through all those differential equations tying together the elements of Dr. Benjamin Kuo’s work in Process Control. As Standard Oil of California was becoming Chevron, the manager of their automation effort, Dick DeBolt, gave me an opportunity that began a long relationship that took me through many experiences and showed the way to use the often-innate, learned capability of the “old guys” to get the new automation work to be properly directed and productively implemented. Later, another Chevron guy, Dave Hylton, who eventually became the chief engineer of Chevron Pipeline Company, assigned me much of the engineering for an offshore development in California, which led to my invention and development of a new leak detection methodology which ultimately involved three patents. 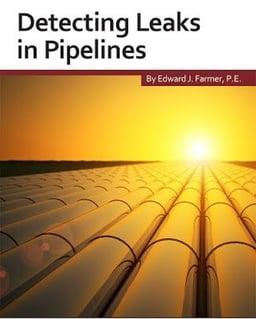 If you would like more information on how to purchase the author's book, Detecting Leaks in Pipelines, click this link. You may also download a free 37-page excerpt from the book.

It was a good start, and a long road. Caltex (a Chevron-Texaco subsidiary in those days) connected me with a worldwide suite of projects, mostly led and supervised by Susan Dwarnick, a health and safety resource director. All this initiated a lot of work around the world, including the North Slope of Alaska, where I met the world’s best engineer, Dave Bruchie, and a collection of the world’s most environmentally sensitive engineers at British Petroleum and Arco.

Seeing more promotes deeper thinking which turned all this into a wonderful and engaging adventure. I will always think fondly of Emerson Process Control and their Rosemount division, who always found a way to supply me with the instruments I needed for our laboratory and on-line product development efforts.

Finally, TechnipFMC investigated our products carefully and researched some applications, and made an offer for it all. Arrangements were suggested, discussed, and implemented, setting up with the full capability and research to move on into whatever the future requires.

That was an exciting and satisfying time for me. I have a picture from the contract signing that marks the moment I knew my financial future was in place as I had always envisioned it would be. I was appointed an ISA Fellow that year, and I have a wonderful picture of me at the ceremony in San Diego, marking the moment I knew I had achieved my professional goals.

I also have a set of pictures from my military service showing everything from basic training, where I spent the Cold War, and my later California National Guard promotion to lieutenant colonel (CA)—there to remind me that making money and working in business is only possible in a country dedicated to ensuring there is the opportunity for all those things to happen.

It was a great journey, proving validity of the Wizard of Oz story about the “other side of the rainbow, where dreams that you dare to dream really do come true.”

When I started, only some of us had ever seen computers. My high school principal (and also a WWII naval aviator), Hanlon P. Tharp, took three of us to the Stead AFB implementation of a North American Air Defense System computer. It involved three floors of a large building and used 60,000 vacuum tubes for processing.

Not long after that, in 1962, JFK presented his “Moon” objective with, “We choose to go to the Moon...We choose to go to the Moon in this decade and do the other things, not because they are easy, but because they are hard; because that goal will serve to organize and measure the best of our energies and skills, because that challenge is one that we are willing to accept, one we are unwilling to postpone, and one we intend to win, and the others, too.” This venture unleashed development of the technology for this to happen, notable among which were integrated circuits, making implementation of the process control and optimization algorithms we learned about in class much easier to implement. Nevertheless, computational power was a struggle, which finally rose out of the swamp with the 386 circa 1986.

Now, we have the computer power to carry this venture past its initial goals and into servicing algorithms that require more data at shorter intervals to adequately feed that which must be known for processing. There remains room for things to get better and smaller still—it has been a long way from the NORAD IBM A/N FSQ-7 to the iPhone, and there is still more to do. The ability to see where all this is going opens a window onto the “next big thing,” which will spawn the effort necessary to inspire the vision and make it possible to pursue, develop, and implement. Life moves on—and we hope that means “forward”—but in any case, it is what we learn and the experiences that convert it to knowledge that show the way.

Most importantly, I want to thank all my readers. I think of you when I select and write this stuff, and it is nice to see or hear of you having some success with it. Blogging is odd that way. It is easy to feel close to my target audience, even with all the virtualization between us. I have had a few comments that were also very special.

I still do a bit of consulting and piddle around in some aspects of modern physics that have held my interest since I sat in a lecture by Dr. Edward Teller back in 1970. Sometimes I feel an energetic rush that reminds of the moments of invention. I love seeing understanding in people’s eyes. Over time, we reach a point where all that effort takes on a different, clearer, character—and perhaps takes us to wisdom. It remains engaging and motivating. It keeps me wondering about where it is all going.

What is there to know next? It is all part of a wonderful adventure. Do not miss it!