The Proper Implementation and Common Mistakes of Sequential Function Charts

END_OF_DOCUMENT_TOKEN_TO_BE_REPLACED

The Proper Implementation and Common Mistakes of Sequential Function Charts

This post was written by Charles M. Fialkowski, director of product marketing for Siemens Process Automation.

In December 1993, the International Electrotechnical Commission (IEC) recognized five standard programming languages that could be used for implementing either process or discrete programmable controllers. The IEC is an organization that prepares and publishes international standards for all electrical, electronic, and related technologies, including controllers. The organization identified five programming languages and their common abbreviations as: ladder diagram (LD), instruction list (IL), function block diagram (FBD), structured text (ST), and sequential function chart (SFC). The third edition was published in February 2013. 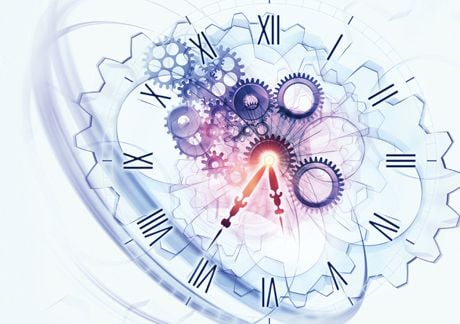 The IEC developed these programming standards in response to the growing number of automation vendors, the growing complexity of applications, and the multiplying methods of implementing control functions. This article provides a brief overview of sequential function charts, describing proper implementation and common mistakes.

Sequential controls specify one or several step sequences. The implementation of sequential control algorithms are generally referred to as sequential function charts. A step sequence is the alternating sequence of steps that trigger certain actions, respectively, and transitions that cause a step to change into another one when the corresponding step enabling condition is met. Each step sequence has exactly one start step and one end step and in addition may contain any number of intermediate steps that are interconnected through transitions. These transitions are triggered via “rising edge” signals. The diagrams may also generate feedback through loops within the step sequence. They can include parallel or alternative branches. In this case, however, the design must be done so that the sequence does not contain unsafe or unavailable segments.

To design sequential controls, a method called state diagrams may be used. State diagrams are easily learned, make automatic error diagnosis possible, and can be converted without a problem into many existing programming languages for sequence controls. However, designing parallel structures may not be possible, because a state diagram, by definition, is in exactly one state at any given time; otherwise, it cannot be considered a state diagram.

One of the core benefits of sequential controls is that all structures can be modeled and extensively analyzed, thus significantly reducing the time it would take to validate conventional structures. Sequential controls parameterize and activate lower-level logical control systems by setting corresponding global control signals. These control signals can have a brief or a lasting, a direct or a delayed effect. Sequential controls, as well as logical controls, have to support different operating modes. Particularly, manual control of the transitions and temporary or permanent interruptions of the process sequences have to be possible. In addition, process-specific protective functions are implemented with sequence controls.

Within the scope of basic automation, different logic control systems are developed that implement a limited, clearly defined function. The functions continuously process input signals and generate corresponding output signals. By means of different control signals, the functions can also be activated and parameterized. To implement complex process sequences—for example, manufacturing recipes for products—it is necessary to coordinate the different functions and to activate them at the right time with the correct parameters. This task can be handled using sequential controls.

The step sequence is the alternating sequence of steps and transitions. The individual steps activate certain actions. The transitions control the change from one step to the next.

The simplest form of a step sequence is the unbranched sequence. Each step is followed by exactly one transition and the transition in turn by exactly one subsequent step. This implements a purely sequential run. Figure 1 shows the graphic basic elements, step (S) and transition (t). 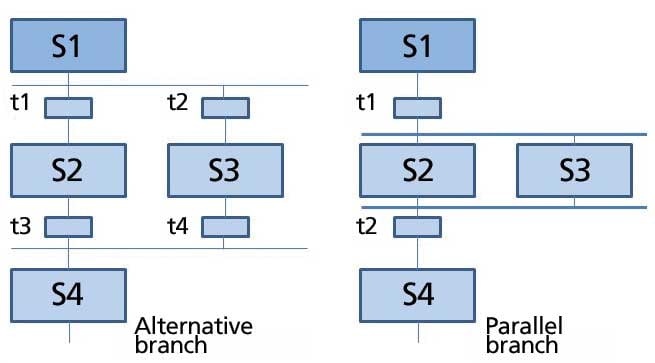 Loops within the step sequence occur when by sequencing several steps, a cyclical run within a sequence is possible. The sequence loop represents a special case of a loop where all steps are run cyclically.

Another option for structuring step sequences is jumps. When a jump mark is reached, processing continues with the step where the jump mark points. Jumps within the step sequence can also result in loops. Because such a structure is difficult to follow, jumps should be carefully used and avoided altogether if possible.

Figure 2 also shows the sequence of a parallel branch with two branches. They are represented with bordering horizontal double lines and protruding ends. As can be seen, the parallel branches always start and end with actions.

Building faulty step sequences by generating incorrect jumps and branches is a typical control engineering problem. Some of the most common faulty step cases are: 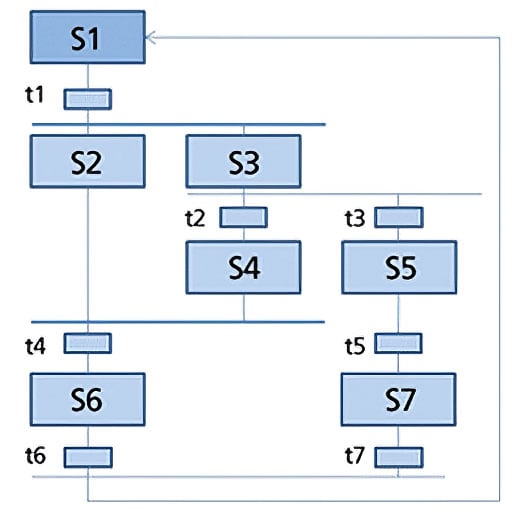 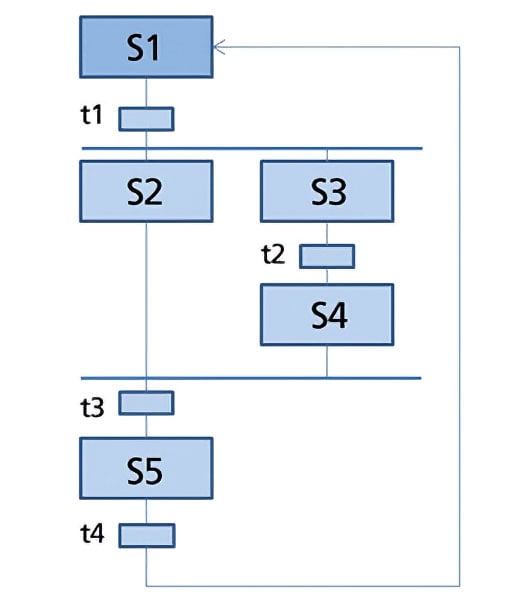 Such structures are not permitted in step sequences and have to be eliminated with proper procedural design methods. Figures 3 and 4 show examples of two step sequences with impermissible structures. In figure 3, we cannot ensure that step S6 is available. In figure 3, we cannot ensure that step S6 is available since the alternative branch after step S3 goes active when transition t3 is enabled and execution passes to S5, and the parallel branch is merged again bypassing S6. This is an example of an uncertain structure. Figure 4 shows an example of an illegal structure, which will only execute once and then stops at step S4. Because step S2 is not active in this state, the parallel branch can no longer be merged in transition t3, which makes it totally stuck—making step S5 unavailable.

Reaction to faults in sequence controls

Particular operating modes have to be implemented to maintain adequate protection and conversion to manual if there is a fault.

Step sequences have to be able to react to faults in the controlled devices. Therefore, continuous fault monitoring is required. It recognizes and signals faults in the controlled devices. It makes automated safety of the plant possible by stopping the step sequence automatically if there is a fault. In addition, it has to be possible for the operator to stop and cancel the step sequence if there is a fault.

In both cases, corresponding protection functions have to be activated to take the plant to a safe state. If a sequence is stopped, it has to be ensured that it can be continued safely and in a way that is permissible regarding process engineering, even for a long interruption. In the sequence controls, process-specific protection functions are implemented, such as sequential locking of several devices if there is a fault in the process.

Many process control systems today implement controls with SFCs. They contain the step sequences and define their sequence topology, the conditions for the transitions, and the actions of the steps. It is possible to define priorities for the start conditions and the sequence characteristics separately for each step sequence. In addition, pre- and post-processing steps that are executed once before or after processing the step sequence can be defined.

The performance of a sequence control in the process control system will depend on the following:

Two different operating modes could be selected for sequence control:

In manual mode, the following commands should be available to the operator to operate the sequence control:

Depending on the selected operating mode, behavior of a step sequence can be controlled through different switching modes when further switching active steps to the subsequent steps.

By using sequence options, it is possible to control the execution time performance of sequence controls. For example, we can specify whether a sequence control is processed once or cyclically, or whether the actions of the active step are actually performed. In addition, time monitoring for the individual steps of a step sequence can be activated, which signals a step error if there is a timeout.

About the Author
Charles M. Fialkowski, CFSE, is director of product marketing for Siemens Process Automation in Spring House, Penn. He has more than 20 years of process automation experience in the chemical, petrochemical, and oil and gas industries, and has been involved in a number of process safety standards, including ISA84 and burner management with NFPA 85, 86, and 87. He is a graduate of Oklahoma State University with degrees in both electrical engineering and journalism.