END_OF_DOCUMENT_TOKEN_TO_BE_REPLACED

This post was written by Wally Baker is a global pressure content marketing manager with Emerson Automation Solutions.

Accurately measuring liquid, gas, and steam pressure is a basic requirement for many industrial processes to operate safely, efficiently, and with optimum quality control. In addition to directly measuring pressure values, pressure measurements can be used to determine or infer flow rates, fluid levels, product density, and other parameters. As a result, many plants rely on pressure-measurement devices to get required field measurements. 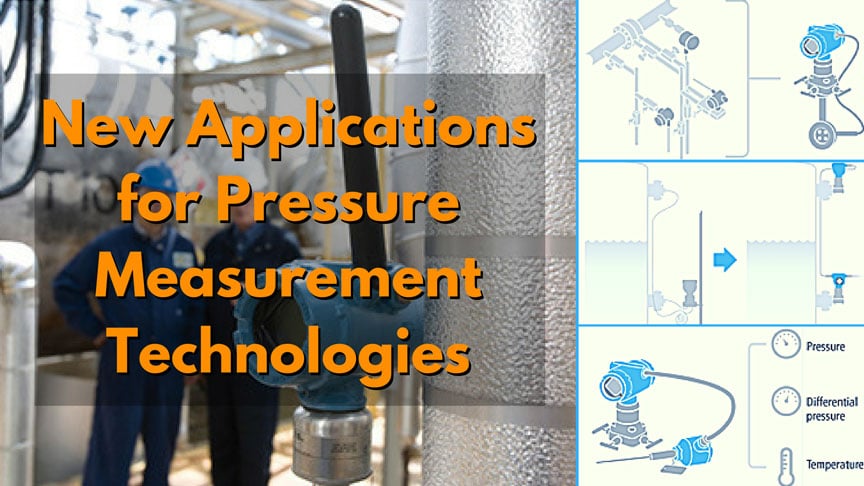 Some example applications using pressure or differential measurements are:

For example, if a constriction, such as an orifice plate, is placed in a pipe, pressure will drop in a predictable way. By measuring the pressure in the pipe both before and after the orifice plate, the rate of flow through the pipe can be calculated.

Pressure transmitters can be used to measure pressure, flow, level, and density.

Most smart pressure transmitters include a basic set of diagnostics that notifies the operator when the device is broken or needs to be serviced. Today’s more advanced smart transmitters provide additional diagnostic insights not only into the state of the transmitter, but also into the electrical loop and process itself, issuing proactive alerts so operators can respond immediately and avoid downtime. New advances in diagnostics include: 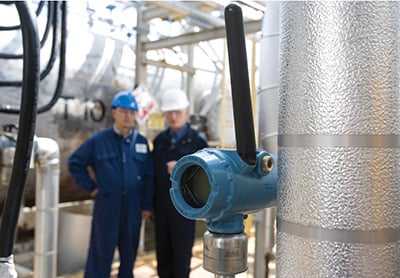 Installing and implementing wireless devices can take up to 75 percent less time than traditional wired devices with the elimination of wiring and construction labor, and the capital costs associated with wireless technology can be up to 40 percent less. In addition, the insights gained from added pressure monitoring points can help extend the life of assets, creating an even greater return on investment. With a battery-powered wireless pressure transmitter, measurements can be made and transmitted anywhere a pressure transmitter can be installed in a pipe, tank, or steam line for flexibility in a variety of applications.

The way a pressure transmitter is physically connected to the process can greatly affect the overall accuracy and reliability of the measurement. Simple installations often use impulse tubing that is prone to leaking, plugging, freezing, and other issues to connect sensors. More complex applications, including those on tanks and meter runs, can require multiple components, pipe penetrations, and connections that can increase the amount of impulse tubing required.

Newer pressure transmitters are available in compact assemblies that use fewer components, are simpler to install, and require less ongoing maintenance. These solutions permit close coupling, a best-practice installation procedure that results in more accurate measurements.

In tank level applications, an electronic dP remote sensor system can even be used to replace impulse tubing with two pressure transmitters installed on the top and bottom of the vessel

and connected electronically. The remote sensors eliminate impulse tubing and associated environmental effects. The system also eliminates the need to heat trace the impulse lines and protect them from freezing.

Heat tracing can add considerable cost and complexity to any process and requires a great deal of maintenance to keep it operational, because applications using heat tracing suffer from frequent failures. These measurement challenges and suboptimal performance can lead to lower throughput, degraded product quality, and cost overruns.

Some dP level transmitters can address these challenges with specialized remote seals to expand the temperature operating range.

The remote seals can operate in hotter or colder temperatures than traditional transmitters can. With this solution, an intermediate diaphragm seal in the transmitter separates two different fill fluids with different optimal operating temperatures.

connected capillary. The solution is not dependent on heat tracing and produces more reliable, accurate, and faster process measurements, particularly in extreme conditions.

The pressure at the bottom of a column of liquid increases as the height of the liquid in the column increases. Pressure is affected by the height rather than the volume of a liquid.

Unlike a liquid, a gas exerts equal pressure on all parts of the container in which it is held. Two factors affect the pressure exerted by a gas:

An electronic/digital connection between two pressure transmitters in a dP level system helps eliminate problems with impulse lines, such as temperature effects, clogging, or freezing in the winter.

The relationship between pressure, temperature, and volume of a gas can be determined by applying the ideal gas law.

Because hydrostatic pressure is directly proportional to the height of the liquid, differential pressure measurements can be used to report levels.

If pressure is measured before and after the restriction in the pipe (e.g., a flow element such as an orifice plate, venturi tube, flow nozzle, wedge, or annubar), the square root of the pressure drop is proportional to the flow rate of the fluid through the pipe.

The level of a liquid in a tank or vessel can be determined from a pressure measurement by this equation:

Approximately half of all flow measurements are made by inferring the flow rate from a differential pressure measurement.

Specific gravity values can then be converted to density or mass-per-unit-of-volume units such as grams per cubic centimeter. Density measurements are often used in the brewing industry to determine stages of fermentation.

Even after decades of use in industrial applications, pressure measurement technologies continue to advance. These advancements make traditional measurements easier, and often allow measurements in areas where they were not possible before.

Wally Baker is a global pressure content marketing manager with Emerson Automation Solutions. He manages Rosemount's pressure product launches and works with users on how to better understand their pressure uses and product needs. He has been in the process control industry since 1999 in various roles, including pressure engineering, temperature global marketing, Singapore wireless marketing, and oil and gas business development.ciation.