What Are the Performance Measures for Pipeline Leak Detection?

END_OF_DOCUMENT_TOKEN_TO_BE_REPLACED

What Are the Performance Measures for Pipeline Leak Detection?

This guest blog post is part of a series written by Edward J. Farmer, PE, author of the new ISA book Detecting Leaks in Pipelines. To download a free excerpt from Detecting Leaks in Pipelines, click here. If you would like more information on how to purchase the book, click this link. To read all the posts in this series, scroll to the bottom of this post for the link archive.

Reasons to do leak detection generally include dealing positively with accidents, discouraging theft, and mitigating other issues a risk analysis may identify. There is generally one more motivation for effective safety-oriented design – meeting the formal requirements that apply to your situation.

In the U.S., the federal government regulates pipelines via Code of Federal Regulations (CFR) 49: Transportation, Parts 178 to 199. Many states, and even smaller political subdivisions, also regulate pipeline operations. Sometimes these regulations overlap, sometimes they flow from completely different points of view. In one offshore project I recall, 22 agencies had interest in regulating features of the project. Dealing with this became a major and often-confusing task, brought to a good outcome by major effort of some special people. 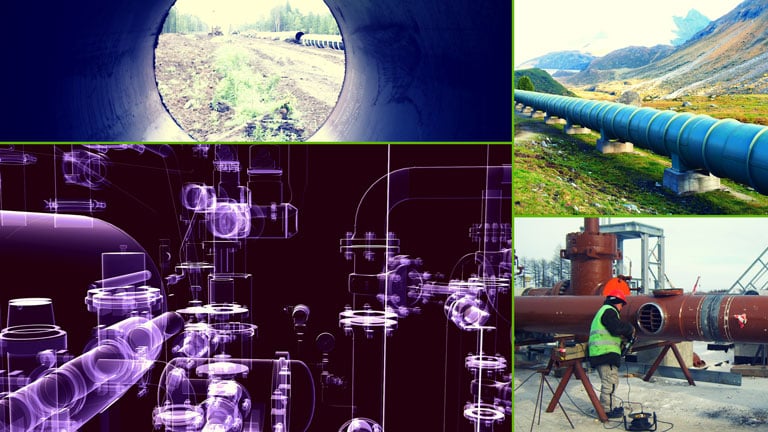 An old friend asked about “performance measures and limits” for pipeline leak detection systems. It’s an old subject that has changed markedly over the years, so it may be interesting to spend a few minutes on where we’ve been and where we’re going.

The performance issues are generally taken to be sensitivity (the size leak that can be detected), specificity (the certainty that a detected event of some kind is actually a leak), and the detection time (the time between the occurrence of the leak and annunciation). Similar issues are involved with the peripheral matters: leak location and size.

Performance, of course, depends on observability (the degree to which the essential parameters can be measured and reported to the system), the capability of the science implemented in the system, and the efficacy of the system itself. Back in the “old days” the science of fluid mechanics was well developed but the equipment (the computers and data communications equipment) were not capable of solving such complex problems in real-time. One of the computer modeling attempts of the day was referred to as a way of detecting yesterday’s leak by sometime tomorrow. After more than 30 years’ experience with Moore’s law we are now capable of solving problems like this at the limits of our knowledge and vision.

The physics of detection

Detection speed begins with two basic issues from classical physics: the speed at which sound travels through a medium, and Newton’s observation that along with mass and energy, momentum is conserved. Pressure events, such as the decrease precipitated by escaping fluid, travels at the speed of sound in the elastic medium (the fluid, pipe wall, backfill, or whatever it encounters along the way).

With a transmission-length pipeline it can reach everywhere in seconds to minutes. Essentially, opening the pressurized pipe to atmosphere produces a sudden decrease in pressure at the leak site that propagates away from the leak, up and down the pipeline, at the speed of sound. Arrival of this pressure rarefaction wave is the first evidence at a monitoring point that some sort of event may be in progress on the pipeline. It is usually observed by pressure monitoring.

The term “acoustic” is sometimes used as a name for a leak detection method. The supposition is that leaks make noise that can be heard. That’s not always the case. Even when it occurs, the audible waves are mechanical waves, just like pressure rarefaction waves, and move along at the same velocity: the speed of sound.

Changes in other parameters, such as mass flow rate or density, require changes in momentum. Essentially, Newton observed that a mass (m) traveling at a velocity v will accelerate over time proportionally with the net forces acting on it. In simple terms, the pressure difference across a segment of pipe containing some mass of fluid will change the velocity of the mass over time. Fundamentally, dv/dt = ΔP / m.

Depending on the mass and the pressure difference, it can take quite some time for changes in fluid flow rate (e.g., factors indicating changes in the mass balance) to re-stabilize. Depending on the situation, this can take minutes to hours. There is nothing anyone can do about this. No matter how fast the computer can run the process has to do its part and actually produce the changes the system is trying to observe and analyze.

Observation is fundamental in all process control work. You cannot detect or act on something you can’t see. There is usually some set of parameters involved with discerning the operating conditions of a pipeline. These parameters are what must be observed to implement the procedure on which the detection system is based. How well they are observed has a lot to do with the confidence one can have regarding whether they are noise or data.

Detecting a 1 percent of flow leak using mass balance metering with an installed accuracy of 10 percent of flow immediately suggests the nature of the problem. You must be able to observe the parameter values that appear in the algorithm with sufficient accuracy to support the results you hope to obtain. That is often more difficult than making some measurements of “everything” at some convenient place along the pipeline.

Instruments produce a series of readings derived from the conditions presented to their sensing elements. The accuracy of these readings depends on the mechanics of the sensing apparatus, the transduction of the sensing element changes into computer-readable signals, the inherent corruption from mechanical limitations in the sensor and process, and apparatus-generated “noise” that obscures the presentation of the true data pertaining to the salient parameters. A long time ago a guy named Mischa Schwartz, while worrying about a different but related subject, characterized noise as, “… spurious or undesired disturbances that tend to obscure or mask the signal…” He and others have provided a lot of insight on the nature of, and how to deal with, noise; all discussed in Detecting Leaks in Pipelines.

Most detection algorithms are based in science and, when properly implemented, result in performance within the capability of the equipment and methodology employed. That does not infer that everyone experiencing a particular noise problem either knows how, or is motivated to, solve it. Put another way, not all implementations of the same technology are equal.

There were some classy cars in the 1930s; Auburn, Austin, Hillman, Morris, Packard, Riley, Hudson, Nash, Studebaker, Vauxhall, Wolseley. With experience, the market found homeostasis around a smaller group with appropriate features. Put another way, while all, or at least most, cars come with four wheels, a seat, and an engine there is a lot more involved in establishing performance, reliability, and desirability.