An Overview of the Control Loops for Batch, Fed-Batch and Continuous Reactors

END_OF_DOCUMENT_TOKEN_TO_BE_REPLACED

An Overview of the Control Loops for Batch, Fed-Batch and Continuous Reactors

The following insights are part of an occasional series authored by Greg McMillan, industry consultant, author of numerous process control books and a retired Senior Fellow from Monsanto.

Nearly all reactors have temperature and pressure control since these affect reaction rate. Concentration control is desirable but depends upon the feasibility, accuracy, and reliability of analyzers and inferential measurements. For at-line analyzers, there is the additional consideration of the dead time added to the 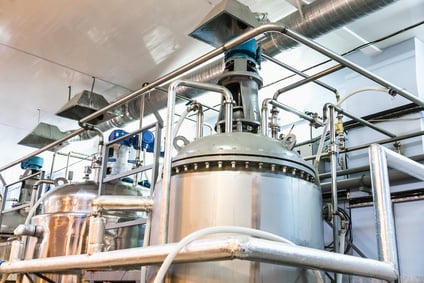 loop. To date offline analyzers have only been used to correct inferential measurements or to make manual adjustments. The use of an enhanced PID opens the door to the possibility of using off-line analyzers directly for control. A large and variable analysis time does not cause instability in a loop with an enhanced PID. The time between off-line analysis results still needs to be made as short as possible for the PID to correct for disturbances since the PID only makes a correction when there is an update.

Insight: Nearly all reactors need temperature and pressure control and would benefit from concentration control.

There is generally no level control except perhaps in terms of a high level override or high level shutdown of feeds in pure batch and fed-batch reactors. In batch reactors, the reactants are fed sequentially and shutoff when charge tank weight measurements or flow totals indicate that the total amount charged is complete. On-off isolation valves are used to start and stop feeds. Flow controllers and control valves are sometimes used to prevent vapor system overload and provide a repeatable feed cycle time. In fed-batch operation, the reactants are fed simultaneously at a rate determined by a control system. As a minimum there are flow controllers for each reactant.

Often common and special opportunities are not recognized due to preconceptions of control loops used for a type of reactor. See Greg McMillan's new ISA book, Advances in Reactor Measurement and Control, for an extensive view of practical opportunities for designing more innovative control strategies to achieve product quality and maximize yield and capacity in different types of reactors.

Many of the same control systems used for continuous reactors are applicable to fed-batch, except that there typically is no level and residence time control. In some cases a level override of reactant feeds is used to push a maximum level constraint to increase batch size for a reactor with a gas coproduct. The level override control maintains a minimum vapor space and prevents liquid carryover into the gas coproduct recovery system. The literature does not lead one to understand that the pressure, temperature, and composition controllers used in continuous reactors to manipulate reactant flow setpoints can be used for fed-batch. The use of these cascade control systems in fed-batch may even be more important because of the opportunity of these systems to provide batch profile control.

Insight: Many of the control systems used for continuous reactor control can be used for fed-batch control. The exception is that level control is not needed except possibly as an override.

Relatively fast and tight temperature control is possible for gas reactors by the manipulation of reactant feed rate due to the lack of inverse response and the small process dead time. The process dead time from the transportation delay of reactants is small compared to the time constants from catalyst heat capacity and thermowell design.

Insight: Relatively fast and tight temperature control is possible for gas reactors due to a small process dead time by the manipulation of reactant feed rate rather than coolant.

Insight: Optimum profiles exist with respect to time for batch reactors, during the startup and transition of continuous reactors and with respect to length for plug flow reactors.

Since intermediate and final product composition generally go in one direction only with time for nonreversible reactions, the control of an absolute value whose setpoint varies with time can result in a unidirectional response preventing the use of integral action. The use of the slope of a composition profile as the controlled variable enables a bidirectional response allowing the use of a standard PID structure and tuning. This strategy can be applied to intermediate and final products and byproducts. For example, bioreactor cell growth rate is controlled early in the batch and lactate formation and product formation rate is controlled late in the batch.

Insight: The slopes of key compositions with respect to time should be controlled rather than a concentration value whose setpoint is varied with time.