What Is the Next Generation of Process Automation Wireless Technology?

END_OF_DOCUMENT_TOKEN_TO_BE_REPLACED

What Is the Next Generation of Process Automation Wireless Technology?

This post was written by Soliman A. Al-Walaie, a communication engineering consultant in the process and control systems department of Saudi Aramco.

Wireless technology is an essential business enabler for the automation world. It has gained rapid acceptance in many industrial sectors because of its cost effectiveness, reliability, fast deployment, and flexibility. Over the past four decades, ultrahigh frequency (UHF) radios have been widely used for long-range supervisory control and data acquisition (SCADA) connectivity in the oil and gas and power and utility sectors. The UHF radio platform was an optimum low-speed connectivity solution that interconnected field remote terminal units (RTUs) to a centralized SCADA host using 25-kilohertz channels. It yielded roughly a 19.6-kilobits-per-second wireless data rate. This capacity is barely adequate for pulling data from field devices and sending supervisory control commands to the field, such as close/open to a valve and start/stop to a pump. 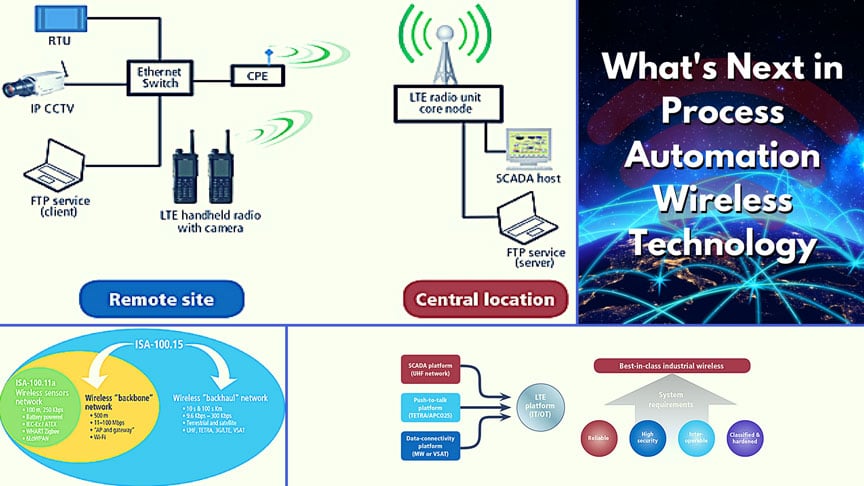 In general, industrial wireless technologies can be classified into three main categories based on their coverage area (figure 1):

The ISA-100 standard groups wireless applications into three classifications: monitoring, control, and safety. Wireless technology might be used for monitoring and noncritical control applications related to Class 2 and Class 3, as shown in figure 2.

Channel reliability is a vital requirement for automation systems. In the old days, a simple parity check or cyclic redundancy check was used to detect errors and request retransmission. Technology has advanced with spread spectrum, forward error correction (FEC), adaptive code modulation, and intelligent power control mechanism. These boost channel reliability and compensate for possible attenuation caused by weather conditions or surrounding structures. In addition, redundant and dual-frequency transmission is becoming popular for plant backbone networks in the 2.4- and 5-gigahertz (GHz) frequency bands.

Security is one of the key challenges in the wireless domain, because air is a shared medium. ISA-100.11a and ISA-100.15 established the recommended security requirements for the confidentiality, privacy, and integrity of transmitted data. The hardware-based advanced encryption standard (AES-128 bit) and strong mutual authentication are key security requirements.

Standard-based radio is equally important to ensure compatibility among wireless components from different suppliers, generally referred to as interoperability. The ISA100 Wireless Compliance Institute was established to ensure products’ compliance and conformance to the established technical specifications and requirements against the ISA-100.11a standard. Other wireless standardization bodies also developed compliance frameworks and certifications to their specifications, such as WirelessHART, ZigBee, Wi-Fi, VSAT (DVB), and LTE.

For most plants’ applications, wireless devices are used in an outdoor hazardous environment. Therefore, systems should be designed with a proper explosion-proof level (classification) and ingress protection (hardened) (figure 3).

For the wireless sensor mesh networks, IEEE 802.15.4 is the core wireless sensor mesh standard (open systems interconnection [OSI] layers 1 and 2) used to derive the ZigBee, WirelessHART, ISA-100.11a, and 6LoWPAN network layers (layer 3+). End users in the oil and gas, utility, and automation industries dreamed of one common converged wireless sensor standard, which never materialized. It is in the best interest of the industry and end users to go for dual-mode gateways that can communicate with two or more wireless sensor protocols. The IEEE 802.11x (i.e., Wi-Fi family) is a good example, where different protocols are served by one Wi-Fi gateway (i.e., a, b, g, n, and ac flavors).

The Internet of Things (IoT), big data analytics, and cloud computing are creating a paradigm shift in the wireless sensor domain. The 6LoWPAN seems to be in a better position to integrate seamlessly and participate efficiently in the IoT domain, as it was built with native IPv6 capabilities.

In addition, several oil and gas end users capitalize on push-to-talk voice services (TETRA or APCO-25) in support of field operations. On top of that, satellite network (VSAT) or microwave is also deployed to deliver high-speed data connectivity at remote sites.

IT/OT convergence is driving businesses to optimize infrastructure, reduce operational costs, and maximize capabilities and integration. LTE is one of the latest wireless technologies developed for mobile and fixed applications. Although it originated as the fourth-generation cellular network, this technology poses great opportunity for industrial applications due to economy of scale, ample bandwidth, and low latency. LTE technology has the potential to transform the above-mentioned fragmented backhaul wireless services (figure 4).

We conducted a proof-of-concept (POC) trial to test and evaluate the use of LTE wireless technology for plant systems and applications. The POC was conducted in a lab environment using a time-division, long-term evolution (TD-LTE) radio system, which operates at 1.8 GHz. It was configured with a 20-megahertz (MHz) channel bandwidth.

The different testing scenarios were: 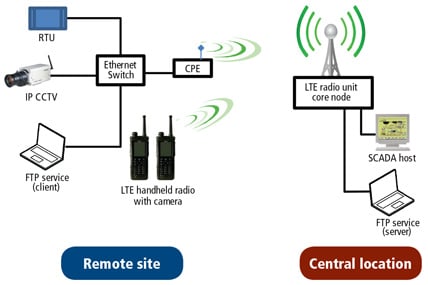 The LTE platform is flexible, scalable, and agile. It supports transmission of different services while maintaining a guaranteed bit rate (GBR) for specific industrial applications, such as SCADA and machine to machine, that are usually time sensitive. Although HD CCTV, FTP, and push-to-talk services were running simultaneously, SCADA traffic was not affected by the wireless loading, as it was configured with GBR that resulted in reliable communication and low latency (20 ms) under the stress-test scenario.

In short, wireless technology has become an essential business enabler for industrial automation and other domains. It will play a vital role in establishing and promoting IoT, big data analytics, and cloud computing. Furthermore, LTE wireless technology can transform the current fragmented islands of backhaul wireless networks and deliver a unified backhaul platform that supports voice, video, and data reliably, securely, and cost effectively. To capture this opportunity, an extra collaboration between IT and automation businesses is required to standardize common wireless platforms and drive seamless IT/OT integration and convergence.

About the Author
Soliman A. Al-Walaie is a communication engineering consultant in the process and control systems department of Saudi Aramco with more than 18 years of experience in industrial networks and IT technologies.