Next Frontier for the Operator-Automation Relationship

END_OF_DOCUMENT_TOKEN_TO_BE_REPLACED

Next Frontier for the Operator-Automation Relationship

This is an excerpt from the November/December 2013 issue of InTech magazine by Eddie Habibi, founder and CEO of Houston-based PAS. To read the full article, please see the link at the bottom of this post.

Industrial control systems are complex designs, but they do not give much consideration to the needs of the human operator. This oversight has caused serious and costly accidents. By empowering operators with the right human-automation relationship tools, companies will achieve and exceed their goals. 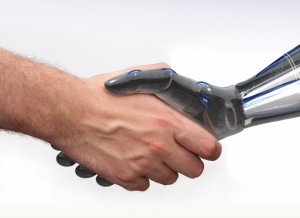 Unprecedented prosperity
The world population is more prosperous today than ever before. The average global per capita gross domestic product has grown by nearly tenfold during the past 140 years. By comparison, this measure was practically flat from 1600 to 1875, the period before the Industrial Revolution. The fastest growth in productivity emerged after World War II and accelerated during the past three decades. The U.S. economy exploded, growing from $2.8 trillion in 1980 to more than $15.5 trillion in 2012. Human ingenuity and innovation made possible by connectivity, information sharing, and collaboration form the basis of this relative prosperity.

Unintended consequences
Specific to industrial production, much of the productivity growth in recent decades is attributed to advances in process automation technologies such as the distributed control system (DCS), the historian, model-based controls, and production optimization. Without much incremental investment in plant equipment, automation technologies have substantially reduced variability and cost, improved throughput and quality, extended asset reliability, and delivered incredible financial returns on investment.

Industrial control systems are complex. They process and generate significant information in real time, and were designed without much thought for the needs of the human operator. Serious and costly accidents have been the consequences of this oversight. Chernobyl, Bhopal, Three Mile Island, Piper Alpha, and Texas City were some of the worst industrial accidents in recent history. Human error is cited as the root cause or a major contributing factor in every one.

Do not blame the operator
Unfortunately, there is a tendency to automatically blame the human operator. Often, the operator is unjustly blamed for such accidents. An operator inherits a production facility as it was designed and constructed. Traditionally, the automation system configuration and the resulting alarms and interfaces are designed and implemented by engineers unfamiliar with human-factors design. It is not unusual for an operator to receive a barrage of alarms during a process upset, or to search through five displays before finding the relevant information related to the situation. Operators, like most everyone else, want to succeed at their jobs.

Understanding human error
Human error may simply be described as the failure to carry out a given task (or the performance of an undesired action) that could result in disruption of scheduled operations or damage to equipment and property. In process operations, human error occurs when an operator fails to take proper action (the right action at the right time) or takes no action when action is required.

Human error can be divided into two general categories: 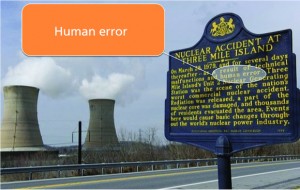 The historical marker in front of the Three Mile Island nuclear power plant reminds us of the role of human error in that accident.

Unintentional errors occur when a worker unwittingly performs, or chooses not to perform, a task. For example, an operator might unintentionally enter 47 percent instead of 4.7 percent when moving a control valve. Another example of an unintentional error is when an operator does not detect the emergence of an abnormal situation and fails to take action entirely. These human errors are generally referred to as accidents.

Internal factors  that reside within the operator, such as tacit knowledge, experience, cognitive abilities, fatigue, and work ethic, affect his or her ability to process information and act promptly. Management can influence the internal factors through rigorous hiring practices, training, policies and procedures, and overall organizational culture.

As an industry, we have to believe that all human error is preventable. Otherwise, the concept of zero accidents, which is the vision of every industrial company, is an unattainable goal.

To read the full article on operator-automation relationship, click here.

Eddie Habibi, founder and CEO of Houston-based PAS, a supplier of human reliability software and services to the power and processing industries worldwide. He is a thought leader in the areas of operator effectiveness, automation and information integrity, and web-enabled knowledge retention and collaboration technologies. Habibi has an engineering degree from the University of Houston and an MBA from the University of St. Thomas. He is the coauthor of two popular books on industrial operator effectiveness: Alarm Management: A Comprehensive Guide and The High Performance HMI Handbook.