END_OF_DOCUMENT_TOKEN_TO_BE_REPLACED

It took many years, but wireless technology has become accepted by skeptical instrument engineers worldwide. When ISA100 Wireless instrumentation first appeared in 2010, engineers were nervous about reliability and noise immunity. Since then, millions of hours of successful operations have been recorded, and wireless is now often the first choice for new plant construction and revamps.

One major reason is cost. Wired transmitters require a wired infrastructure, which can include a power supply, cabling, conduit, and cable trays to bring the signal to a field junction box or marshalling cabinet, along with I/O devices at the control and monitoring system to accept the transmitter's 4-20 mA or fieldbus signal. This can make a wired transmitter installation a very expensive and difficult undertaking. Battery-powered wireless transmitters do not need the wired infrastructure or power supply, so they can be installed quickly and inexpensively.

Although few engineers now hesitate to use wireless for monitoring purposes, wireless valve control has not enjoyed such success, often due to latency, along with the safety and reliability required for closed-loop systems.

In a 4-20 mA wired system, the signal is always present. The control system can read a level transmitter, determine that a valve needs to close, send the appropriate signal to the valve controller via a 4-20 mA signal, and the loop is closed almost immediately. Not so with standard wireless.

A wireless level transmitter is typically battery powered. To save battery life, the transmitter normally is set to send a wireless signal every second, or less frequently depending on the application. The wireless signal is relayed by other wireless transmitters in a mesh network arrangement until it arrives at a gateway. There, it is added to the plant's network and arrives at the control system.

The control system determines that the valve should close and sends the appropriate signal over the network. The network delivers it to a wireless router, which transmits it to the valve controller. Total time elapsed is probably a minimum of 1 or 2 seconds depending on the signal frequency, but it could be much longer-perhaps 10 seconds or more, depending on latency in the type of mesh network. In particular, mesh networks with auto reconstruction of communication paths can substantially delay signal propagation. For a control or safety valve, 10 seconds is entirely too much time. A tank could overflow while the valve awaits a close command. Fortunately, there are ways to address this issue, starting with selecting the right wireless mesh network.

Three types of wireless mesh systems are used in the process industries:

An automatic mesh may be unsuitable for wireless valve control-and many other real-time control functions-because the latency cannot be determined beforehand. It frequently varies because of interference or noise on the path of signal propagation. Therefore, fully automated meshes often degrade real-time performance.

A semi-automatic or fixed mesh system enables reliable, real-time communication and near instantaneous discovery of path failure. With a fixed mesh system, the latency for a specific transmitter can be calculated during the design stage. Ideally, for a control valve application, engineers will set paths so the critical components in real-time control (the sensor, such as a level or pressure transmitter, and the valve controller, for example) will have direct, line-of-sight paths to gateways, eliminating any "hops" and minimizing latency.

Although some applications require lower or higher performance, the ISA100 Wireless standard aims to ensure systems can transmit command signals within 1 second. This is because it was primarily developed under the principle that 1-second latency covers a reasonable range of applications without involving painful trade-offs or asking the user to apply unproven control concepts. Maintaining and supporting these existing operating principles is one of the key benefits of using ISA100 Wireless technology.

Safety operations are already exploiting the ability of ISA100 Wireless to provide 1-second transmission times, with safety systems set up in numerous refineries and process plants using ISA100 Wireless networks. For example, an ISA100 Wireless adapter can be installed on an on-off valve (figure 1), so the control system can shut a valve in a minimum of 2 seconds, but the total response time will depend on the publication period of the control signal. For example, the device shown in figure 1 accepts signals once every 2 seconds, but other devices may introduce longer delays. 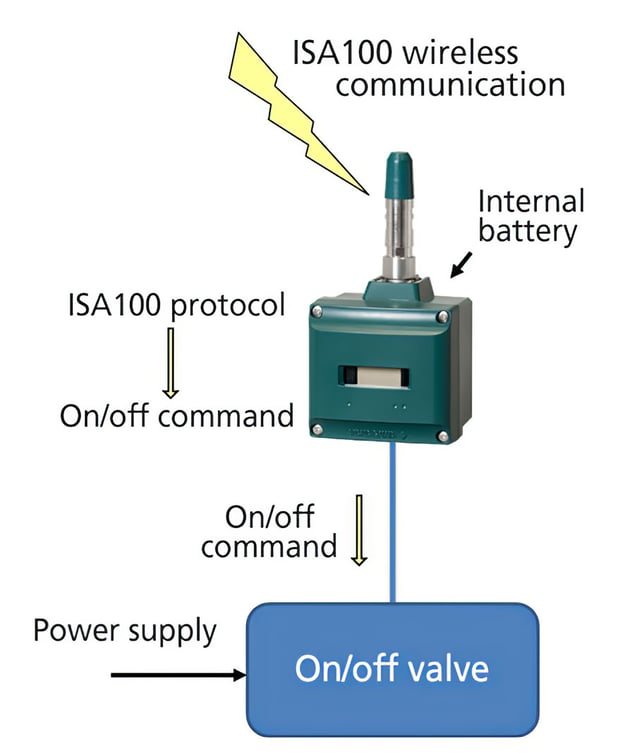 A monitoring example is a PROFIsafe system using ISA100 Wireless to connect a gas detector to a safety programmable logic controller. In gas detection, sensor data must be quickly transmitted to a safety system when hazardous gases are detected. Using the PROFIsafe protocol over ISA100 Wireless ensures correct message sequencing, message content, device address, and parameterization. The implementation relies on the low latency, reliability, error handling, and security intrinsic to ISA100 Wireless to meet SIL 2 standards.

In these kinds of applications, response speed is critical, but must also be accompanied by a high level of reliability. Organizations can achieve this by using ISA100 Wireless's automatic retransmission feature.

As the calculations show, when the number of retransmissions increases, the reliability of communication rapidly increases.

The ISA100 Wireless Duo-cast system is a redundant fixed mesh (figure 2) that provides extremely high reliability by delivering data to the controller in a predetermined time, even if the wireless communication and the wireless access point have a single failure. Essentially, critical measurements are sent directly to two gateways simultaneously, ensuring that one of them will get through. This has the reliability needed for both wireless valve monitoring and control and for other critical real-time control applications.

With its 1-second latency time and reliability from automatic retransmission and Duo-cast, a well-designed ISA100 Wireless instrumentation network can operate as dependably as wired I/O in most critical applications, including valve control. 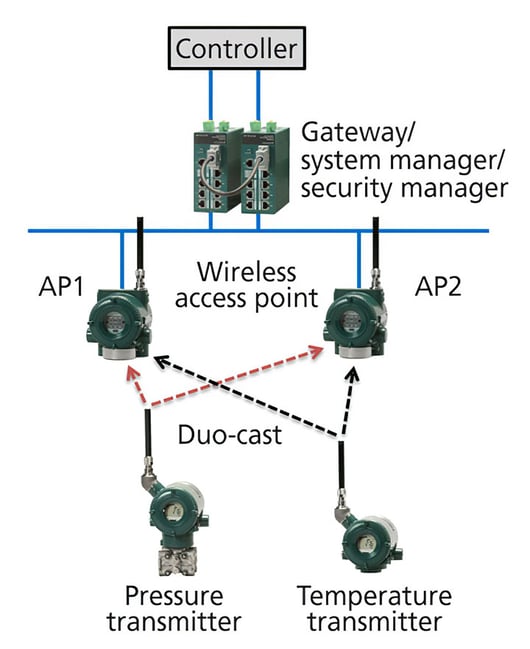 Shuji Yamamoto is wireless promotion manager in Yokogawa’s New Field Development Center. He joined Yokogawa after completing a master’s degree in electronic engineering from Shinshu University with a specialty in high frequency research. He has had a variety of responsibilities with the company over his career, primarily related to wireless networking and IIoT.