Does Your Company Have Vision to Leverage Disruptive Industrial Automation Innovations?

END_OF_DOCUMENT_TOKEN_TO_BE_REPLACED

Does Your Company Have Vision to Leverage Disruptive Industrial Automation Innovations?

Disruptive innovations create new value, so users can achieve better results and, in many cases, more functionality. These innovations may be new applications or may replace traditional methods and solutions. In addition, disruptive innovation can change organizational structure, including roles and responsibilities that are not initially obvious.

Amazon, Uber, iTunes, and Airbnb are well-known disruptive examples that are not directly related to industrial manufacturing and automation, but do illustrate the creative application of technology and new concepts that have dramatically changed commerce. Industrial examples include the use of hydraulics to replace mechanical methods (i.e., cable, pulley) and mechatronics to replace gearboxes and mechanical camming with programmable coordinated motion.

The subtle part of disruptive innovation is that many times it is the combination and creative use of current off-the-shelf technology with innovations and creative thinking to build new and better solutions that result in significant improvements, ease-of-use, and added functions. Many times, established suppliers see the disruptive innovations as unattractive for a range of reasons and try to ignore them.

An example in the industrial automation industry is the initial resistance of traditional suppliers to replacing proprietary human-machine interface (HMI) hardware and software with PCs and Windows-based software. A recent example related to industrial automation and manufacturing is a “smart helmet” that is a combination safety helmet and goggles that also gives the wearer virtual instructions, safety information, and mapping with information displayed on its safety screen.

Why should you care?

Companies that do not take advantage of the appropriate disruptive innovations are likely to become uncompetitive at some point and be leapfrogged by their competitors. Conversely, companies that leverage disruptive innovations position themselves to become leaders in their industry. There are numerous examples of companies using innovative thinking and technology to become industry leaders.

Ford dominated the early automotive industry. More than 100 years ago, Henry Ford and his team at the Highland Park assembly plant launched the world’s first moving assembly line. It simplified the production of the Model T’s 3,000 parts by breaking production into 84 distinct steps performed by groups of workers as a rope pulled the vehicle chassis down the line.

Andrew Carnegie built his steel-making business leveraging technology with new processes, such as the Bessemer process. He installed new material-handling systems, including overhead cranes and hoists to speed up the steel-making process and boost productivity. Carnegie was relentless in his efforts to drive down costs. He would tear out and replace equipment at his mills if a better technology was developed to reduce costs and make his mills more efficient.

Federal Express Corporation, founded in 1971, leveraged bar code and computer technology to achieve dramatic growth. One of FedEx’s great contributions was the tracking system launched in the 1970s, which has become standard in shipping. It was initially an internal process for quality control. When the system went online, it included early prototypes of handheld computers that scanned package bar codes with wands. 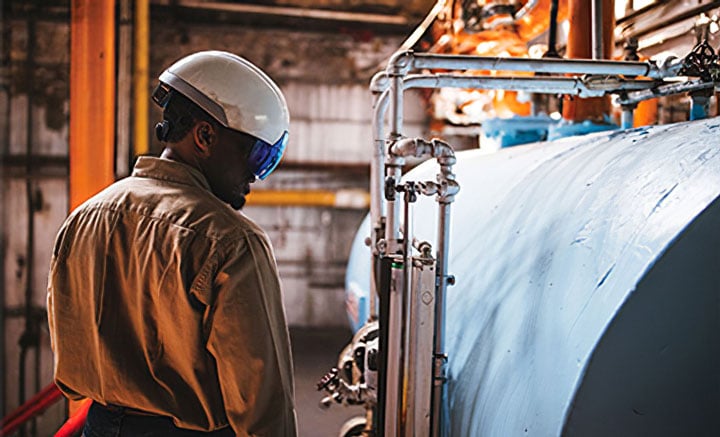 The DAQRI (pronounced like the drink) Smart Helmet incorporates audio, a video camera, and a see-though computer display.

These are my thoughts of elements that have the potential to be innovations that create disruption in the near future.

Smartphones and tablet computers are already becoming a major user interface of choice for manufacturing systems, allowing people to remain connected when not in a control room. Manufacturers of all sizes can transform the ways in which they operate production and use personnel more efficiently.

Advances in artificial intelligence (AI) and machine learning, coupled with networked intelligent sensors, are in the early stages of creating a giant leap forward in optimization of manufacturing and predictive maintenance. AI and machine learning will increasingly become embedded in equipment and processes.

Knowledge technology can be used to capture the experience and know-how of experienced operations people, which can be integrated into automation systems. This helps meet the growing challenge of experienced people retiring and the lack of people to replace them.

Augmented reality is starting to add just-in-time information to the physical world. For example, there are applications where the user aims a smartphone or tablet camera at a machine, and a range of information is displayed, including alarms, operating parameters, and service manuals.

Advancements in technology allow complete controllers to be embedded in sensors and other end devices. For example, a complete IEC 61131-3 programmable logic controller can now run on a single-chip processor inside a sensor or actuator. These devices can also be "things" in the IoT, communicating directly with enterprise and cloud systems.

Machine-to-machine communications using embedded single-chip systems on a chip and sensors with wired or wireless communications join networked sensors to perform diagnostics and make virtual repairs without human intervention. By 2020, there will be well over 50 billion "things" talking to each other, performing tasks, and making decisions based on predefined guidelines using artificial intelligence.

There has been an explosion of communications that can make industrial automation systems and controls more valuable, including cellular communications, Wi-Fi, Bluetooth, and protocols (MQTT, MQ Telemetry Transport, and Time Sensitive Networking).

Monitoring and collecting more data (big data) brings the context of information to the sensor and actuator, simplifying systems. With context at the source, the functional meaning of the data is known. Big data has limited value if the data captured does not have context. Traditionally, raw data collected from sensors and actuators was given context by an application engineer programming the contextual relationship in HMI, a historian, or distributed control system operator station software.

Cloud computing is making on-demand information storage and remote processing available. For many applications, the functions traditionally done by dedicated historian software can be done more efficiently and cost effectively by cloud services. For example, I have talked with large users that are adding historical data collection using commercial cloud services rather than investing in additional dedicated historian software. The reasons given are the flexibility and lower cost of open architecture solutions.

The number of applications for drones will continue to expand rapidly. Drones have already proven to be of high value for search and rescue, and are quickly being applied to many industries. At a recent industry conference, a power company described how it uses drones with video cameras to inspect high-tension power lines for physical connection deterioration, avoiding regular on-site inspections by personnel. This saves money and allows service personnel to focus on more productive tasks.

Investment in disruptive innovations must be carefully considered to maximize the benefits. The new technology needs to be stable and supported such that it does not become overly expensive. Small pilot projects with a limited investment are a good way to test the value in your organization. Stakeholders need to understand that if this does not work, the project will be abandoned and not pursued further.

Disruptive innovations tend to be produced by outsiders and entrepreneurs, rather than existing suppliers. The business environment of market leaders does not normally allow them to pursue disruptive innovations when they first arise. They are not profitable enough at first, and development can take scarce resources away from supporting existing systems.

When technology that has the potential for revolutionizing an industry emerges, typically only a few companies with vision see it as attractive and leverage it. The role of the industrial automation professional is to continually be on the lookout, evaluating new innovations that can improve quality, productivity, and efficiency.

Automation professionals are uniquely positioned to explain and recommend how technology should be utilized as part of an organization's overall corporate manufacturing strategy now and into the future. The goal is to have a technology strategy that is aligned with overall business objectives. External forces should be researched and communicated to management, including a summary of changes driven from outside the organization and disruptive automation innovations that could cause the organization to become less profitable or competitive.

Small and incremental innovations are additive and lead to superior manufacturing performance, enabling companies to be more competitive. In the long run, high (disruptive) technology bypasses, upgrades, or replaces the outdated support network.