END_OF_DOCUMENT_TOKEN_TO_BE_REPLACED

The amount of liquid in equipment such as vessels or distillation columns is required to conduct the operation and give the head to the pump in order to avoid cavitation. A gauge or sensors are needed to measure the liquid level in the distillation columns or vessels. However, if these sensors or gauges fail as a result of a glitch or malfunctions, incidents, near-misses, and disasters can occur. A level transmitter malfunction caused the BP Texas explosion, which resulted in the column being overfilled with hydrocarbons. The system was blown down by liquid passing through pressure safety valves, resulting in a wildfire. The Buncefield Disaster was another tragedy caused by a malfunctioning level transmitter.

With these case studies we can understand how accurate level detection is required. In one survey report, it was noted that 50% of problems in distillation columns are due to the liquid level in the bottom sump.

The consequences of false liquid detection are that:

There are many types of level detectors available on the market, such as radar, gamma rays, magnetic, differential pressure, capacitance, ultrasonic, conductive, etc. However, towers and vessels are mostly equipped with differential level detectors due to obstacles like trays, demisters, baffles, and where the liquid is not conductive. It is cheaper, more economical, highly precise, and easily understood.

Due to space constraints or to make it self-draining, level transmitters are installed unknowingly above the altitude of liquid, which we would expect during normal run in some plants (see Figure 1). 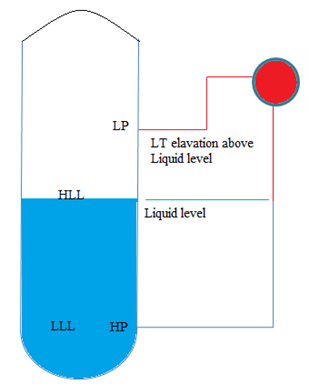 Generally, based on the type of fluid that is being handled (corrosive, high temperature, or cold), capillary type differential pressure (DP) level transmitters are used to avoid any leakage or toxic leakage, and maintenance is easy without complexity. These types of level transmitters provide us with the flexibility to install level transmitters above the high liquid level without much error, but it is also limited. It depends on the density of the capillary-filled fluid and the pressure inside the equipment. 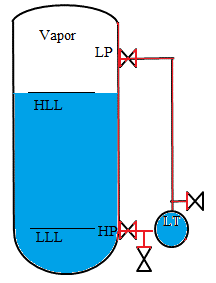 When a normal impulse tube level transmitter is installed above the high liquid level, either deliberately to make itself-drain or unknowingly due to space constraints or by mistake, it would affect the detection of the correct level in the drum or column. We can see in Figure 1 that the DP type level transmitter is installed above the high pressure (HP) tapping of the level transmitter and above the high liquid level (HLL). At the top of the impulse tubing (HP tapping), there is always vapor present that is compressible and won’t reflect the exact pressure that is exerted by the liquid in the impulse tubing. As we know from hydrostatic law, pressure with height reduces. This means the pressure of the liquid head is nullified at the height of HLL and the vapor is compressed. It is based on unknown pressure, and it will always show an error in reading that there is not actual liquid level in the drum/column.

If the level transmitter is mounted below the lower liquid level (LLL), then it must be calibrated based on compensation of the extra head that is below the LLL. If the process fluid is condensable at the ambient temperature, such as steam or heavier hydrocarbons, then it should be calibrated based on a wet leg basis. Some high-level hard alarm sensors are installed on the standpipe of a column or vessel, but they have an issue with vapor lock, which might prevent them from alerting the operator while overfilling. Therefore, all high-level tuning forks or hard alarm sensors should be installed directly on the column shell without any isolation and above the normally expected level (ie, HLL).

Always mount a normal DP type level transmitter below the HLL or lower liquid level that would provide us with precise and perfect readings. All hard alarm sensors should be installed directly on column well above the HLL.

Nicholas M. and Whitfield A. 2013, The Buncefield accident and the environmental consequences for fuel storage sites and other sites in the UK regulated under the Seveso Directive, Chemical Engineering.

Abhishek Sharma is a process engineer at an ethylene plant. He has more than four years of experience in the steam cracker unit. He completed his B.Tech in chemical engineering from the National Institute of Technology Raipur, India with honors and completed process equipment design and process plant design courses from IIT Roorkee and IIT KGP, respectively. He is an active professional member of the American Institute of Chemical Engineers and an associate member of IChemE. He is currently involved in the smooth operation and troubleshooting of the plant.