END_OF_DOCUMENT_TOKEN_TO_BE_REPLACED

This guest blog post was written by Rick Slaugenhaupt, a consultant for MAVERICK Technologies, as part of a blog post series on standards-based design.

In previous posts in this series (click here and here), I’ve talked about the need and desire for companies to significantly improve their operational capability and flexibility to compete successfully in a world market, and described some likely hurdles encountered in that journey. I’ve also implied that how those improvements are implemented can be more important than how many.

That notion may be counter-intuitive, but the standard is higher than ever for the technical infrastructure required to achieve sustainable success. In this posting, I’ll begin to describe the applicability of several ISA standards, and how they can form the basis for a comprehensive approach to automation excellence. 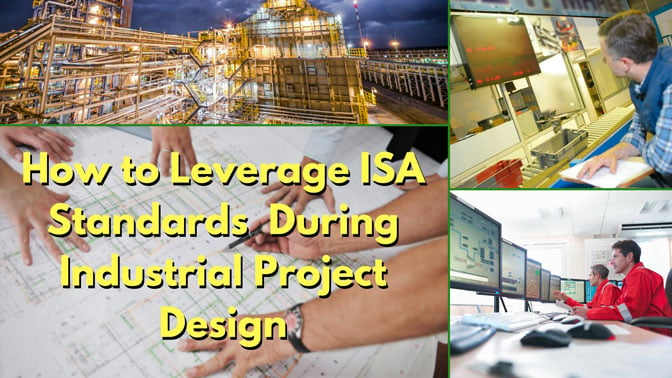 Ask three people for their opinion about the best way to do something, and you’re likely to get three different answers. So how can we establish best practices? First, choose a larger sampling for your data. Then, make sure that your sources are very experienced and cover a broad and varied industry base. Finally, focus on the answers where there is consensus after thorough discussion. This together may seem like a tall order, but the good news is that it has already been done for us!  ISA standards are created this very way, involving the insight from dozens of highly-experienced engineers representing hundreds more from a diverse range of companies and industries.

Add to that the fact that many of those standards are now quite mature, resulting in global recognition and adherence by so many vendors’ products that it’s only logical to look to those standards as a benchmark of best practices from which we all can benefit. Long-lasting process control solutions start with a good, solid foundation – like ANSI/ISA-88. This functional-design standard is considered the de-facto guideline for control system design. Its longevity and reach have proven this out over the last couple of decades.

Except in Europe (where they use IEC-61499), there is no more dominant methodology to define both the details and broad strokes of good system design. One of those broadest of strokes involves the separation of procedural logic from basic control. Basic control supports physical equipment capabilities, which don’t change unless the equipment changes. This form of direct control defines how the system works, while procedural logic determines when and why.

When you consider the typical changes that affect a control system over its life, they generally fall into the procedural category. By separating this logic from the physical control, inevitable changes or process tweaks can be implemented with less impact on the system, and consequently less re-testing of affected functionality after those changes are completed. For batch processes, ISA-88 provides detailed guidance for implementing highly structured procedural logic in the form of recipe operations and phases, which create a very flexible and configurable framework for defining the order of process actions needed to produce many different products from the same equipment.

When a process is continuous, however, recipes can be more complicated than necessary for handling the limited variation of products and processing steps. That doesn’t mean there isn’t a procedural side to those continuous processes, however. There are still transitory aspects like startup, grade or production rate changes and shutdown to automate in a continuous operation, and these require procedural control. For that, there is a simpler methodology described in the Technical Report ISA-TR106, “Procedure Automation for Continuous Process Operations—Models and Terminology”.

While not yet released as a standard, ISA-TR106 describes a best-practices approach for implementing generic procedural automation that falls beyond the typical scope of ISA-88. Before the ISA-106 guideline was published, operators were burdened with the step-by-step management of process transitions - quite expectedly, there was plenty of performance variation resulting from the differing levels of operator experience.

By automating these process transitions, the skill of the best operators can be captured and consistently duplicated by the automation system to reduce product variability, increase production and address safety concerns. Because these benefits are so readily achieved with improved procedural automation, most major platform vendors now offer one or more configurable modules supporting ISA-106 principles.

These two standards go a long way in creating a solid, yet flexible framework for building solutions by simply separating basic and procedural control. Simple as that method may be, it’s still true that “the devil is in the details”. In later posts, I’ll go into some of those details from ISA-88 and other mainstream standards that improve performance, maintainability, operator effectiveness, process safety and business integration.

About the Author
Rick Slaugenhaupt is a consultant for MAVERICK Technologies with more than 30 years of industrial controls experience. Prior to joining MAVERICK, he served as a plant engineer, software designer and independent consultant for small and large companies alike. His work has involved all aspects of engineering design & construction of production equipment, processes and systems  for continuous and discrete manufacturing, metals, powders, chemicals, water treatment, facilities management and security.