END_OF_DOCUMENT_TOKEN_TO_BE_REPLACED

This post is authored by Maurice Wilkins and Marcus Tennant, of Yokogawa Corporation.

For all the sophisticated automation in process manufacturing environments, there is one area where operators still take manual control in many facilities: procedures for infrequent operations. When it is time to start up a unit, make a grade change, adjust to a new feedstock, or make any number of specific adjustments to the process—operators often resort to manual operations out of necessity. Once the condition is addressed and everything is stabilized, the process is typically returned to automated operation.

This happens in all sorts of plants, so why is it a problem? Here are three reasons:

1. The plant often depends on the skill of a single person or small group to execute the manual procedures. Success depends on those key individuals doing a good job, which may not be a problem as long as the key men or women are around and know how to perform the procedure. However, given the demographic problems with aging workers, this type of dependence is becoming ever more perilous.

2. Few plants have procedures adequately documented. Many plants depend on the knowledge of those few skilled operators who know how procedures are to be performed, sometimes in accordance with documented instructions (assuming they exist), and sometimes following the “right way” in spite of what the instructions say.

3. Safety statistics show the majority of incidents not related to outright mechanical failures happen during abnormal situations, primarily unit startups and shutdowns. Lest we forget, the Kern Oil Refinery fire in January 2005 occurred during a crude unit startup. The BP Texas City disaster in March 2005 took place during a raffinate splitting tower startup. Unfortunately, there are many more examples.

The recipe for disaster happens when an infrequent operation has to take place, but the key individuals are not available, leaving inexperienced operators to follow inadequate or incorrect instructions. Something gets out of control, leading to an abnormal condition with undesirable outcomes of equipment damage, environmental release, injuries, or fatalities.

Infrequent operation procedures can be automated, but as already discussed, they often are not. Why? There are several reasons, some technical, while others relate to human nature.

In spite of the problems, arguments supporting procedure automation are compelling enough to cause many companies to launch such efforts. ISA joined in by creating the ISA106 committee in 2010. Much has been drawn from the ISA-88 standards based on parallels between procedures in continuous processes and batch processes. Other elements from the ISA84, ISA95, and ISA-101 standards have also been incorporated in the effort.

Such groups as NAMUR, the Center for Operator Performance, and the Abnormal Situation Management Consortium have provided resources and input. A variety of vendors and end-user companies, including Dow, Bayer, and Chevron, have also pitched in. The committee published its first technical report in 2013, covering models and terminology. It is working on the second technical report about work processes. Work on a standard is planned to start in 2015, using industry feedback from the technical reports to create the standard.

Any new standard has to begin by establishing basic definitions so discussions can proceed in a way everyone understands. Some of these definitions are terms, and others are models reflecting how systems and equipment are deployed in actual process plant environments.

ISA-106 uses three key models: physical, procedure requirements, and procedure implementation. The models organize various elements of the process to simplify analysis and create steps. Each begins at the highest level and drills down from the enterprise to an individual field device (figure 1). Moving down the list, each level grows in number, so the lowest level invariably has the largest number of individual elements. 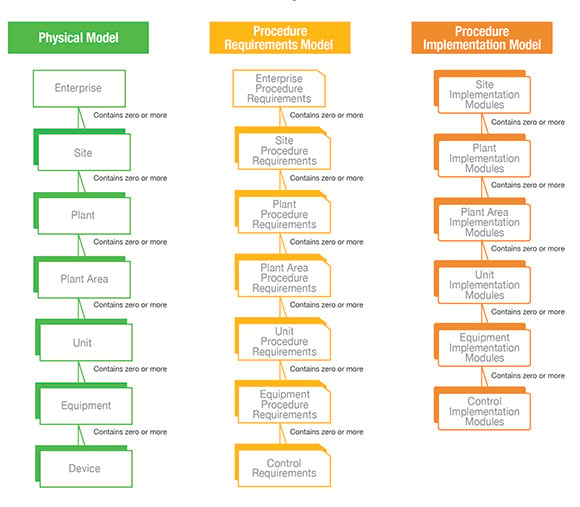 Figure 1. The three types of models operate in parallel, but each has a specific function.

Physical model: This model organizes physical equipment according to a hierarchy from the enterprise level down to an individual device. Moving from the top level down, each level grows in number of elements (figure 2). The model provides a common set of terms and equipment levels, so different companies and even different industries can establish uniform reference points, making direct comparisons easier. The list shows the possibility for any level to have procedures. There can be a procedure to start up an entire production site, just as there can be one for using an individual analyzer. 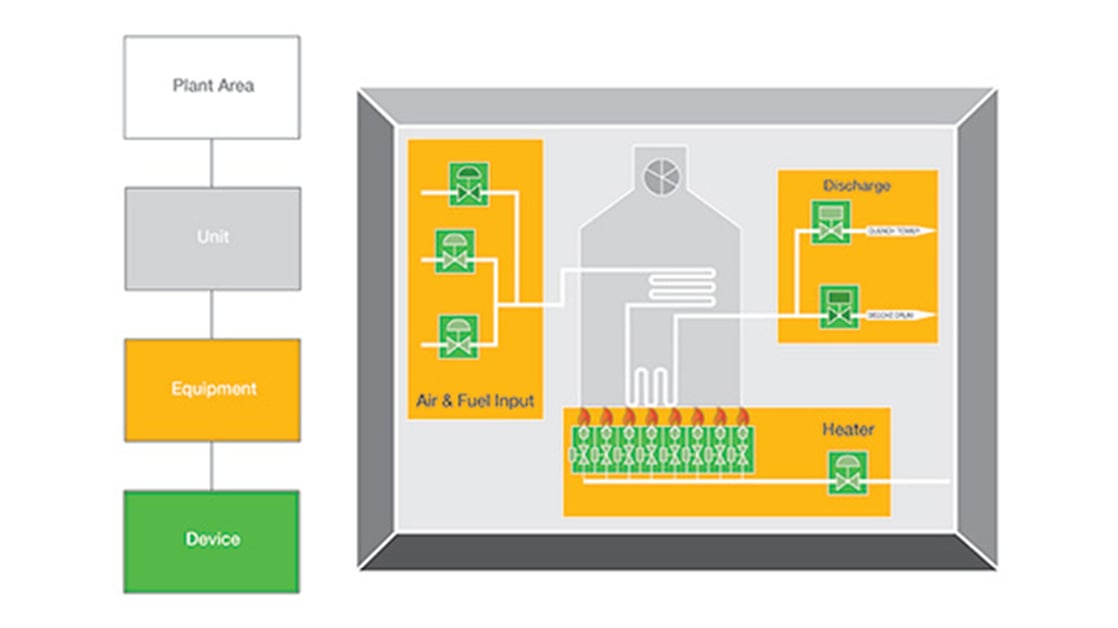 Figure 2. The physical model illustrates how each area of a plant is made up of different levels of equipment and components down to individual devices.

Procedure requirements model: This model parallels the physical model by designating the same seven levels from enterprise to device. Its objective is to define a procedure by describing exactly what must be done to accomplish it. In so doing, it establishes the functional requirement for the automated procedure and ties these requirements directly to objects in the physical model. The lower the level, the more detailed the association between procedures and objects.

Procedure implementation model: This model also parallels the physical model, but it begins one level lower, at the site rather than the enterprise (figure 3). Things get more interesting here, because now the actual procedure is outlined in detail. With the equipment and the needs of the procedure defined, it is possible to construct the program, function blocks, and sequential function chart. These must begin with the procedure requirements model as the specification, but there is not necessarily a one-to-one mapping with the procedure requirements. 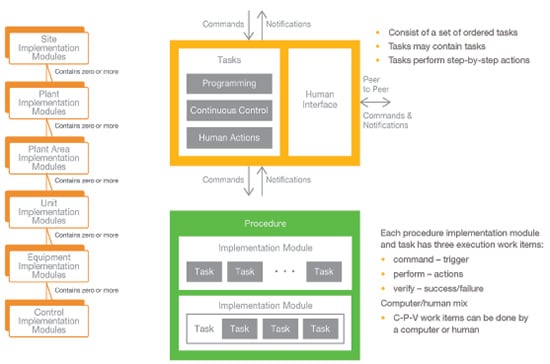 Each implementation module includes a set of ordered tasks, and those tasks may have their own subtasks. Each task performs step-by-step actions in a defined order. There are three elements contained within each task:

Each command-perform-verify sequence can include a mix of automated and human operations as appropriate for the specific task. For example, a human may need to verify if an automated task has been performed correctly, or vice versa. Once each command has been performed and verified, notification is sent to the next task in sequence.

The procedure requirement and implementation models must be accurate, or to put it another way, the automated procedures will only be as good as the models. If the models are not thought through carefully, the procedure will not deliver the desired results, and the effort will likely fail.

Companies implementing the kind of program outlined above realize value in a number of ways:

Manufacturers understand how successfully managing infrequent operational procedures, combined with flawless execution every time, is critical to the safe and efficient operation of continuous process manufacturing. The ISA106 committee has released a technical report to help process industry firms document best practices and incorporate them into automated control systems. By applying the practices found in the technical report, a single process plant, a complete facility, or even an entire company can achieve significant improvements in operational efficiency.

Reducing startup time and variability Evonik Industries is one of the world’s major specialty chemical producers, with many plant sites in Europe and around the globe. One acrylic acid production site operates a unit with two reactors, four distillation columns, and a crystallizer. This unit runs as a continuous process, but shuts down frequently for cleaning and maintenance. Restarting the unit can be time consuming, wasting feedstocks and leaving the plant vulnerable to safety incidents. Although some very skilled operators can get the plant back into operation and stabilized in less than three hours, their availability is not consistent. As a result, startups often take more than four hours. Since implementing procedure automation, the unit is able to duplicate or beat the startup time of the best operators every time (figure 4). Compared to an average of times realized by operators, the automated approach shortened distillation column startup time by 30 percent and reactor startup time by 70 percent. Because startup procedures are now documented, they are consistent and repeatable, resulting in safer operations not dependent on the presence of a few key operators.

Figure 4. Each time Evonik restarted the unit, operators charted the time necessary to
reach stable production, which ranged from 2.5 to almost 5 hours. Once the procedure
was automated, quick and consistent startups became routine.

Marcus Tennant has been with Yokogawa Corporation since December 2008 as a senior principal technology specialist. Before Yokogawa, Tennant worked at Rockwell Automation for 10 years as a product manager and application engineer. Before that, he was with Morton International for 10 years, holding various positions in process development, project engineering, and quality assurance and with Jones-Blair Company for five years as a research and development chemist and process engineer. Tennant has a B.S. in chemical engineering from Michigan State University and an M.S. in operations and technology management from the Stuart School of Business at Illinois Institute of Technology. He has been a member of AIChE since 1984 and is also a member of ACS and ISA.
Connect with Marcus :

Click here to read this article on continuous process manufacturing and ISA-106 at InTech magazine.