Inspire the Next Generation of Leaders by Volunteering for FIRST

END_OF_DOCUMENT_TOKEN_TO_BE_REPLACED

Inspire the Next Generation of Leaders by Volunteering for FIRST

This post is written by Pat Gouhin, ISA executive director and CEO.

I recently had my most rewarding experience of the past year.  Some time ago, I agreed to volunteer for the regional, three-day FIRST Robotics Competition held in Raleigh, N.C.  I asked to be assigned to anywhere I was needed.  When I showed up for the first day of setup and practice, I found that I had been slotted as a member of a six-person team responsible for safety.   We were given cool green shirts emblazoned with the words “FIRST Safety Advisor” and we were briefed on our areas of responsibility.  Sounds simple, easy and straightforward, right? 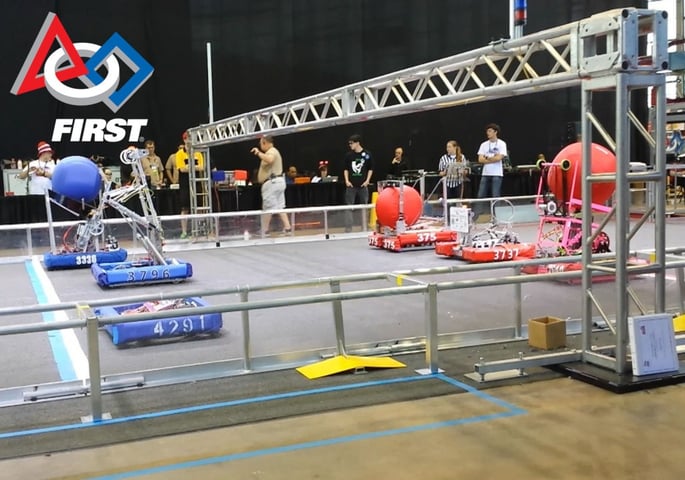 When you consider that we had the primary responsibility to keep a safe environment while 54 teams − some with more than 20 members − were building, assembling, testing, and operating electrical and mechanical robots that performed a variety of functions in a small area along with a few thousand spectators, it was anything but straightforward.

It was actually quite hectic.  Teams came from up and down the mid-Atlantic region and one team even traveled all the way from The Netherlands!  Each team had multiple mentors (engineers and technicians from their local communities), teachers from their schools, and parents.  They were assigned, with all of their equipment, to a 10-by-10-foot box within a special area called “The Pits” that was behind the arena where the game was to be played (watch the video).

Each match consisted of three teams representing the red side and three teams representing the blue side.  They had to work together to move big balls from one side of the field to the other, over trusses, and through baskets and windows where they scored points.  It was a very intense experience to say the least.  There were about 100 matches with each match made up of a different combination of six teams.  In the end, two teams would be crowned winners and move on the national competition in St. Louis, Mo.  Click this link to watch an amazing time-lapse video created by one of the teams.

I was most surprised and pleased to see how these high school students listened to every word that came out of the mouths of the safety advisors.  We were seen and respected as an authority figure that could give them guidance and advice ensuring their safety and those around them.  But it was not superficial: They were genuinely and sincerely interested in obtaining and maintaining a safe environment in all that they did.

There was the standard stuff like wearing safety glasses and making sure no one had opened-toed shoes but we went all the way through other safety factors involving proper operation of saws, drills, electrical equipment, battery charging and storage, movement, storage, testing of the robots, and more.  The team of safety advisors “patrolled” the area offering guidance and direction when we saw a potential infraction or safety concern. But then we also acted as a collective group and evaluated each team based on a variety of criteria.

Each day awards were given for the safest pit and to the individual who most embodied a safety culture.  After an evening consultation, we would go around the next morning and hand out the awards of a pin and certificate.  It was so refreshing to see the excitement on student faces as well as the satisfaction in the eyes of mentors and teachers.

ISA is a strategic alliance partner of FIRST.

While I was feeling particularly good about my choice to give my time to this well-organized and meaningful group, there was a particular moment that really struck home for me and put it all in perspective.  There was a roving deputy sheriff who had been assigned to the event for crowd control.  At one point I went over to her and asked how she was doing in keeping everybody in line.  She immediately shared how much she loved the assignment and how there was nothing more motivating than watching these teenagers interact with adults in such a positive and cultivating manner.  She told me that the day had given her a restored hope in the future.

She also offered that she NEVER sees this side of life; considering realities of law enforcement in a major metropolitan area.  She thanked me for volunteering my time to make a difference in the lives of these talented young people that will inherit the Earth.   It was a special moment, and was one of many expressions of gratitude that were delivered that day.

These events happen all over the world and there is more than likely a team in your local region that could use the helping hand and knowledge of a mentor.  If a team is not present, perhaps you would consider sponsoring one for 2015?  This would be a great activity for an ISA Section to embrace and support!  Discover the many volunteer or sponsorship opportunities for FIRST by visiting http://www.USFIRST.org.

Pat Gouhin is Executive Director and CEO of the International Society of Automation.  Before joining ISA, Pat served as chief operating officer of the American Institute of Aeronautics and Astronautics, and as the first vice president of Operations and Technology Transfer for the National Institute of Aerospace at NASA's Langley Research Center in Hampton, Va.  He earned a bachelor's degree in aeronautical and astronautical engineering from Ohio State University and a master's degree in engineering management from George Washington University.