END_OF_DOCUMENT_TOKEN_TO_BE_REPLACED

This post was authored by Hans D. Baumann, Ph.D., PE, author of Fluid Mechanics of Control Valves: How Valves Control Your Process and a world-renowned expert on control valve technology. To read a brief author Q&A plus download a free, 42-page excerpt from the book, click this link.

After the hectic activity of the 1980s and 1990s, especially on the international level through the International Electrotechnical Commission (IEC), efforts to either refine or create new standards have slowed considerably. Past activities led to a spate of standards yielding more accurate sizing, due to a better understanding of fluid dynamics, as related to valves, and even equations to predict fluid-induced noise from both liquids and gases. However, current efforts both in ISA and IEC-TC 65B, WG 9 committees primarily revolve around maintenance of existing standards.

Although such inactivity and lack of basic research may have saved companies money, it points to the sad fact that we do not see any more scientific papers based on laboratory experiments by major valve companies. This, in turn, reflects the lack of basic new valve types coming on the market. Of course, this may just be a sign that the control valve industry is maturing, which is also apparent from the fact that more than 85 percent of all control valves sold in today's market were developed in the 1960s. The bulk of "new" valves still rely on old technologies. While this stagnation in the development of new control valve technology may have been prudent from an accountant point of view, well-established existing products do lack patent protection and are easy prey to being "reverse-engineered" (copied) here and abroad, which reduces market share and ultimately profit for established companies.

Over the past 40 years, the market has adapted to using rotary types of control valves to replace globe-style valves, especially in larger sizes (typically above three inches) and for more moderate service conditions. The least expensive types of rotary valves are butterfly valves. However, until recently, a number of flaws limited their acceptance as final control elements:

In an effort to overcome these negative effects, several new butterfly valve innovations have recently come on the market. One of these, called a Control-Disk, is manufactured by Fisher Controls, a division of Emerson, whose engineers added controlling profiles on a basically metal-seated, double-eccentric butterfly valve, which then gives the valve an equal percentage inherent flow characteristic. Another patented idea, centered around rubber-lined valves, is presented by Lilly Engineering Company, Inc., of Itasca Ill., with their Z-Disk. It claims to overcome all the detriments listed above, making this valve also a serious competitor for globe-style control valves and other more expensive rotary valves.

What is of interest here is that the vane has no profiled surfaces in order to create an equal percentage flow characteristic (figure 2), but relies solely on the exponential change in the cosine of the opening angle (distance B in figure 1). 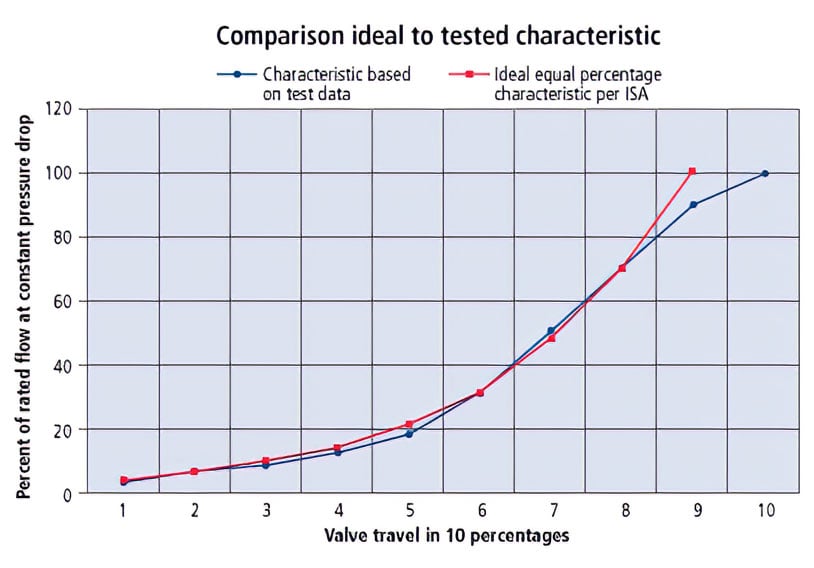 Figure 2. A typical inherent flow characteristic of the valve type shown in figure 1 compared to an ideal equal percentage one

In line with upgrading butterfly valves for more demanding service, Yeary Controls of Chicago came up with a novel way to upgrade conventional on-off butterfly valves for more demanding control applications. They used a relatively low-cost butterfly valve and added a control device consisting of a slotted structure, where the slots are separated by teeth having interior curved surfaces dimensioned to cooperate with the camming portion of the rotating vane. This exposes selected slots to flow, designed to convert the heretofore near-linear characteristic of the basic butterfly valve into an equal percentage one.

In addition to this function, the width of the teeth is selected to produce jet sizes for gases having higher peak frequencies, where sound is more readily absorbed by the pipe wall, thus reducing noise by up to 15 dBA. The slots also allow higher pressure drops for liquids due to the increase in the coefficient of incipient cavitation. However, even if cavitation occurs, the slots ensure that the length of the emanating cavitating jet is very short, thus protecting the pipe from structural damage. Higher peak frequencies reduce the overall noise level of throttled liquids as well.

Related to protecting the environment from unwanted noise, Yeary Controls also came up with a novel approach. Control valves always relied on two basic ways to reduce throttling noise. One way is to use special trims, usually slotted plugs or cages, to reduce sound within the valve itself. The other approach is to use downstream sound-absorbing devices, such as silencers or plates having many small perforations. The latter are very effective if the flow rate stays fairly constant, say between 100 percent and 50 percent of rated flow. This is due to the constant number and sizes of the perforations.

To overcome this problem, the Yeary device, called a varying area diffuser (VAD), has a pressure-activated sliding piston with a multitude of holes cooperating with an equal number of holes in a static cylinder. Here the piston travels at a distance of little more than the diameter of one hole. By moving the piston in proportion to the flow rate, holes partly overlap, and therefore change the total throttling area as needed. This procedure works quite well, and the device is equally suited for gases and liquids. Typically only 15 or 20 psi are allocated as pressure drop across an accompanying conventional control valve, which responds to a controlling signal from a process controller, while the rest of the pressure differential is absorbed by the VAD.

This device has a very short response time, typically within one second. It can therefore absorb minor process upsets before the master control valve is able to respond. This produces a very stable control loop. Surprisingly too, the pressure recovery factor (FL) is very high (0.98). This, together with the relatively small sizes of the numerous passages, creates little ambient noise for both liquid and gaseous fluids. 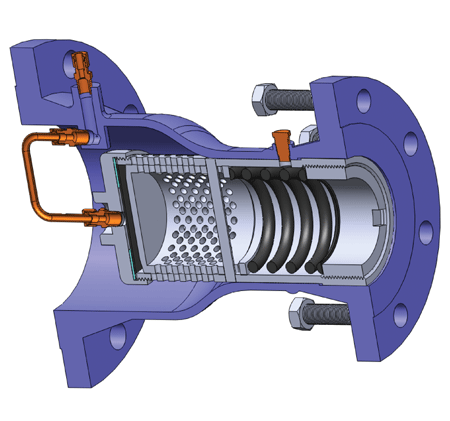 I well remember when control valves were sized with special slide rules. Gratefully, we now have very sophisticated computer programs that can handle not only sizing equations, which have become much more complicated over the years, but fairly accurate noise predictions as well.

Yet, in addition, there are programs that can be very helpful in the design of valve passages for flow optimization. One such program, for example, can predict the velocity and the pressure profile of virtual fluid passing the passages of a proposed control valve body. This saves much time in building and flow testing actual hardware. In the example shown in figure 5, such a program is used by the Watson-McDaniel Co. to maximize the flow capacity of a newly designed 2-inch globe valve, helping the designer by streamlining the flow passages to achieve a competitive flow capacity, despite an only 6-inch face-to-face dimension.

Not being left alone, control valve manufacturers participated in the outsourcing trend that began in earnest in 2000. It started with the search for less expensive materials, such as iron castings from Brazil or stainless investment castings from Korea. Later, lower-wage opportunities enticed valve companies to form subsidiaries in countries such as China and India. However, the rapidly rising wages in those countries caused a shift of control valve production to closer venues, such as Mexico. Foreign plants became primarily suppliers for local markets.

Fortunately, there is still little to fear from foreign manufacturers of control valves trying to import to the U.S. market. Control valves, especially for the large U.S. petrochemical market, are typically custom build to meet specific process conditions. In addition, local vendors are preferred due to their established reputation and ease of communication.

At present, the market outlook is mildly optimistic, primarily due to the recent new opportunities found in fracking for natural gas and in the conversion of power plants from coal to natural gas. Additional export opportunities exist in China, considering their high rate of nuclear power plant construction.

About the Author
Hans D. Baumann, is a world-renowned expert on control valves. He is credited with more than 100 U.S. patents relating to valve control technology and has written eight books (among them the Control Valve Primer: A User's Guide and Fluid Mechanics of Control Valves: How Valves Control Your Process) on the subject. He is: an Honorary Member of ISA, ASME, the Fluid Controls Institute, and the Spanish Chemical Engineering Society; a member of Sigma Xi; and an inductee of the Automation Control Hall of Fame. For many years, he represented the US at the IEC International Standards Committee on control valves. In 1977, he founded H. D. Baumann Assoc., Ltd., a manufacturer of control valves. The company was initially acquired by Fisher Instruments, and is now part of Emerson Process Management. During his career, Hans has served in numerous positions, including chief engineer at W. & T. Co., a German valve supplier; manager of research & development at Worthington S/A in France; director of engineering at Cashco; vice president at Masoneilan International, Inc.; and senior vice president of technology at Fisher Controls. Hans holds degrees from Case institute of Technology (now part of Case Western Reserve University) and Northeastern University, and earned a doctorate degree in mechanical engineering from Columbia Pacific University.