END_OF_DOCUMENT_TOKEN_TO_BE_REPLACED

This post was authored by Dick Hill, vice president and general manager of manufacturing advisory services at ARC Advisory Group.

Clearly, any new automation project requires economic justification. Although this often involves hard "dollars and cents" quantification of cost savings from increased production, reduced raw material costs, or increased uptime, it is also about "soft" benefits, such as reducing risks and improving agility. All contribute to making your company more competitive. This article will focus on the latter, while also highlighting considerations for the former. It will also share some best practices that ARC Advisory Group has identified. 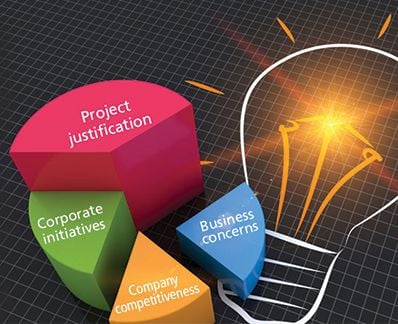 When considering a change of any kind and researching the alternatives, it is very important to understand that your business is likely to be flooded with opportunities to invest capital and that change needs to be justified for the benefit of the company. Personal or department goals need to be subordinated to corporate goals. In the automation domain, a number of factors should be evaluated for their economic contributions to a justification. But it does not end there. Justification must take into account the broader opportunity to better position your company for future competition, likely involving greater agility, additional products, or improved quality.

Example items to consider in a justification

Maintenance and service costs: These costs will increase for older equipment. Spare parts may be difficult to find. Direct replacements for a component disappear. Those familiar with the technologies may become a rare commodity. In addition to increased costs of repair, older systems are likely to have a longer mean time to repair. If repair requires production shutdown, this downtime will clearly affect production throughput, and it will be important to know your cost of downtime.

Recycling and sustainability: These factors may also be relevant in corporate culture or product costing. Recycling costs or construction materials may figure into the value of a system or its replacement.

Added flexibility: Existing systems may have been designed and implemented for a specific product and purpose, but are difficult to change and adapt to new product or business requirements. These requirements can include product variations or changes to batch or lot sizes. A new system can provide a great deal of flexibility, which could be a significant benefit for your business.

26 Automation Trailblazers Who Changed the World

Titans of Automation  The International Society of Automation (ISA) explores the lives and careers of som...
Bill Lydon Jan 22, 2021 5:30:00 AM

What Are Some Opportunities for Wireless Measurement and Control?

The following technical discussion is part of an occasional series showcasing the ISA Mentor Program, aut...
Greg McMillan Jan 19, 2021 5:30:00 AM