Industrial Automation Industry Exploring and Implementing the Internet of Things

END_OF_DOCUMENT_TOKEN_TO_BE_REPLACED

Industrial Automation Industry Exploring and Implementing the Internet of Things

The idea of the Internet of Things (IoT) has been creating a great deal of excitement in the computing and communications industry for some time. Currently, the industrial automation industry is starting to explore and implement IoT concepts and technology. Other terms 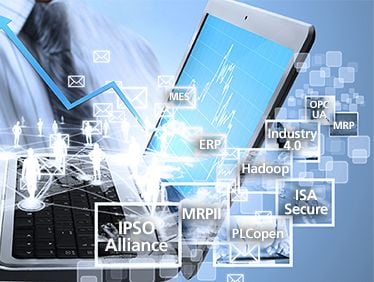 related to these concepts are machine to machine (M2M), Internet of Everything, Internet of Things, and IP (Internet protocol) to the Edge.

Kevin Ashton, a British technology pioneer, is generally attributed with inventing the term "the Internet of Things" in 1999; although the concept has been discussed in literature since at least 1991. Commercially, in 2008 IBM launched its Smart Planet initiative. The same year, the nonprofit IP for Smart Objects (IPSO) Alliance was started with more than 50 members from technology, communications, and energy companies to promote the IP for "smart object" communications.

The IoT vision is of a massively instrumented world of intelligent sensors (analog and digital) and actuators (analog and digital) communicating using IP to improve performance and efficiency. Internet protocol is the primary protocol in the Internet layer of the Internet protocol suite, delivering packets from source hosts to destination hosts solely based on the IP addresses in packet headers. There are a broad range of IoT applications that can be improved with sensing and control, including health care, traffic control, vehicle safety, energy use, agriculture, and manufacturing. This vision includes coupling massive sensing and control with big data and analytics to accomplish advanced levels of optimization and efficiency.

Industrial automation has a history of adopting commercial technology as it becomes mainstream, and applying IoT technologies to improve performance and enable better integration with business systems is a logical step.

IoT applied to automation uses this technology to streamline, collapse, and create system architectures that are more affordable, responsive, and effective. The goal is frictionless communications and interaction from manufacturing field input/output (I/O), including sensors, actuators, analyzers, drives, vision, video, and robotics, for increased manufacturing performance and flexibility. This revolution will drive intelligence to the edge of the system with the ultimate goal of all industrial devices supporting IP, including field I/O. Wireless IP devices, including smartphones, tablets, and sensors, are already being used in manufacturing. The wireless sensor I/O open standards WirelessHART, ISA100, and WIA-PA are all IP devices supporting the latest IPv6 standards, which leverage larger address spaces and improved cybersecurity standards.

The IP-enabled manufacturing automation architecture will distribute more functions into new breeds of powerful industrial controllers and sensors/actuators with embedded processors, eliminating the need for middle-level software that is cumbersome, expensive, and difficult to maintain.

The IPSO is a global collaborative forum, including many Fortune 500 high-tech companies. Founded in 2008, the nonprofit organization focuses on providing a foundation for industry growth through building stronger relationships, fostering awareness, offering education, promoting the industry, generating research, and creating a better understanding of IP and its role in the Internet of Things. I  asked IPSO a couple of questions about the IoT.

What is your functional definition of the Internet of Things?

"Connecting the unconnected. This means identification of the device, a communication infrastructure able to securely deploy billions of devices, and open standards to sustain innovation in manned and unmanned environments. The IoT benefits from decades of innovation and the benefits of experience from large deployments [on a worldwide scale] using Internet protocol technologies and associated security protocols," says IPSO president Patrick Wetterwald.

What standards does your organization believe are fundamental to the success of the Internet of Things?

"IPv6 up to the end device is the common basis for the IoT. International standard organizations in all domains [industrial, smart grid, transportation, home] have already published standards based on IP [IPv6] communications and will continue to work on endorsing IP technologies on their respective domains. Internet protocol technologies are the responsibility of the IETF [Internet Engineering Task Force]. A close relationship with the IEEE [Institute of Electrical and Electronics Engineers] ensures that all the communication layers work perfectly together. ISA and IEC are examples of organizations that have published standards based on IP [IPv6]," says Wetterwald.

Pascal Thubert, technical leader at Cisco, IPSO member, and IETF 6TiSCH co-chair, also commented on the IoT, "Wireless sensor networks offer the capability to extend the reach of monitoring and control beyond what is physically and economically possible with wires. The next step of process optimization will be gained by leveraging the collection of currently unused measurements by widely distributed sensing devices and analytic capabilities. This will require the combination of the best of IT and OT [operational technology] together, forming the IT/OT convergence, aka the Industrial Internet. This evolution is perfectly illustrated by the emergence of time-sensitive networking, on both wired networks with deterministic Ethernet and wireless networks with 802.15.4e TSCH, that are initially driven by automation applications and generalized to multiple industries, such as audio video and finances."