END_OF_DOCUMENT_TOKEN_TO_BE_REPLACED

This post was authored by Deanna Johnson, director of marketing communications for machine automation solutions at Emerson Automation Solutions.

To some, the Industrial Internet of Things (IIoT) is just a new buzzword—but to the process industries, the IIoT is becoming a necessity to maintain competitiveness. Oil and gas companies, refineries, and other process industries are trying to cope with various market forces, many of which require improved plant performance.

The 650 major refineries globally are especially affected. Some of these plants are operating at peak performance, but many are not, causing a significant financial impact. Our calculations show the difference in operating costs associated with equipment reliability and energy efficiency between a well-run refinery and an average one is about $12.3 million per year for a typical 250,000 barrel-per-day facility. Assuming about 60 percent of refineries are not operating as well as they could, the overall worldwide financial impact runs to billions of dollars annually.

To increase reliability and efficiency, and to gain other operating benefits such as reduced maintenance and improved safety, many refineries and process plants are turning to the IIoT.

The IIoT essentially involves acquiring data from hundreds—if not thousands—of process and equipment sensors, and transmitting the data to central locations via wireless or hardwired networks. The goal is to sense anything, anywhere in a cost-effective manner.

Once the data arrives, it is stored in databases, historians, the cloud, and other locations where it can be accessed by software that analyzes and interprets the sensor information using “big data” techniques to diagnose conditions, detect equipment problems, and alert operations personnel. Such software can reside in the plant’s control system, a dedicated PC, or in a server half a world away.

The “Internet” part of IIoT refers to the fact that the Internet can be used to connect the various systems. In many instances, all the networking is done at the plant itself, with the Internet replaced by an internal intranet, but the basic principles still apply: huge amounts of data are gathered and analyzed to find and solve problems.

Space does not permit an exhaustive analysis of all the applications where the IIoT can save energy, reduce maintenance costs, and improve process efficiency. However, here is a short list of what is possible to monitor and analyze with these types of systems:

Following are several examples of how the IIoT was used to improve efficiency and find problems at process plants worldwide.

Steam trap monitoring via wireless acoustic transmitters is a leading IIoT application. When traps fail open, high-pressure steam leaks out, so more steam has to be produced by boilers. Depending on the price of steam at a facility, a single failed-open steam trap can waste $30,000 worth of steam each year.

When traps fail closed, they do not remove water droplets from the steam. Accumulated water, moving through piping and equipment at a high rate of speed, can rupture steam lines and cause turbines to throw blades. Repairs are very expensive, and downtime is often significant.

Most plants monitor their steam traps manually via annual checks. This is very costly in terms of labor, misses many problems, and in the worst case can allow failed traps to operate for years.

Levaco Chemicals in Leverkusen, Germany, had to save energy to meet the June 2012 Energy Efficiency Directive required by the European Commission and ISO 50001. The plant determined that defective steam traps were causing loss of steam and inefficient heat transfer, and therefore wasting energy.

They also installed specialized data analysis software on a PC. The gateways connect to the PC via an Ethernet cable. This software analyzes real-time data from the steam trap acoustic monitors. These instruments measure the ultrasonic acoustic behavior and temperature of steam traps, and the software uses this data to identify existing and potential problems.

By repairing or replacing failed steam traps, the three plant areas immediately had substantial reductions in energy costs. Failed traps were no longer venting valuable steam, which lowered energy consumption to produce steam, and failed traps were no longer causing process shutdowns. The increased energy efficiency easily met the Energy Efficiency Directive and ISO 50001 requirements, and the plant was awarded a certificate of compliance in 2015.

Levaco calculated a return on investment of fewer than two years, thanks to savings in energy costs. It also reduced the number of process shutdowns because of steam trap failures, and eliminated the need for maintenance technicians to make regular rounds, resulting in further substantial savings.

In a similar application, a corn milling plant was experiencing a 15 percent annual steam trap failure rate, with 12.5 percent of the plant’s steam traps responsible for 38 percent of the steam loss. Steam trap issues were efficiently identified and addressed with the application of wireless steam trap acoustic sensors and accompanying analytics. The payback period was just a few months, and the annual savings were $301,108.

Table 1 illustrates the savings possible in a large plant that has 8,000 steam traps, where 1,200 are considered critical. If the plant previously experienced a 15 percent failure rate per year, by preventing those failures with steam trap monitors the plant will save $3,279,960 per year.

It is estimated that pumps account for 7 percent of the total maintenance cost of a plant or refinery, and pump failures are responsible for 0.2 percent of lost production. Many pump failures can be predicted using IIoT, modern condition-based monitoring techniques, predictive technologies, and reliability-centered maintenance best practices.

Historically, the expense of installing a dedicated IIoT online monitoring system has prevented it from being used on anything beyond the most critical pumps. But with the relative ease of adding online pump condition monitoring with today’s wireless sensor technology, online monitoring can be installed quickly and inexpensively. 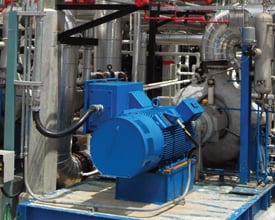 Cavitation monitoring is needed on high-head multistage pumps, as they cannot tolerate this condition, even for a brief time. Although cavitation often happens when pumps operate outside their design ranges, it can also be caused by intermittent pump suction or discharge restrictions. Damage can occur before manual rounds discover the problem, but can be detected sooner by continuously monitoring the pump discharge pressure for fluctuations with a wireless pressure transmitter.

Vibration monitoring detects many common causes of pump failure. Excessive motor and pump vibration can be caused by a failing concrete foundation or metal frame, shaft misalignment, impeller damage, pump or motor bearing wear, or coupling wear and cavitation. Increasing vibration commonly leads to seal failure and can result in expensive repairs, process upsets, reduced throughput, fines if hazardous material is leaked, and fire if the leaked material is flammable.

Online vibration monitoring has been successful in detecting several root causes of pump degradation. A complete IIoT pump health monitoring system can pay for itself in months. At one refinery, for example, pump monitoring systems were installed on 80 pumps throughout the complex. The annual savings was more than $1.2 million after implementing the pump monitoring solution, resulting in a payback period of fewer than six months (table 2). The savings came from decreased maintenance costs of $360,000, and fewer losses from process shutdowns because of failed pumps, which were conservatively valued at $912,000. 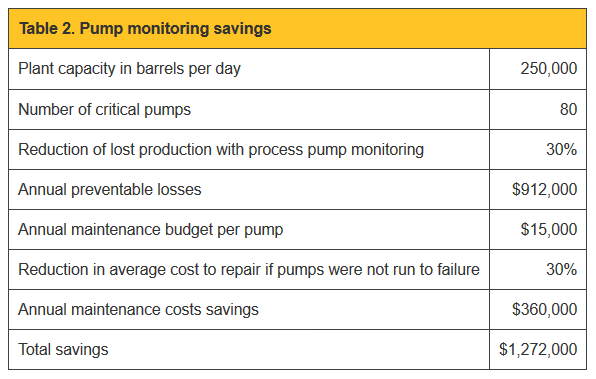 Heat exchangers in many plants can be a major source of downtime, often causing considerable maintenance expenses, significant loss of production, and poor plant performance. Existing monitoring may involve manual spot measurements performed periodically. These types of measurements provide an inconsistent view of failures and are time consuming, with accurate assessment based upon technician expertise.

Many refiners are trying to maximize their use of low-cost crudes, but using this type of feedstock often presents significant processing challenges. Typically, crude unit preheat exchangers can foul unpredictably with changes in the crude blend and process conditions. As a result, energy efficiency is lost, and production can be limited. Adding additional wireless temperature measurements to exchanger banks provides increased data to process analytics software that can then alert operations to excessive fouling conditions and rates. Using WirelessHART technology, heat exchanger monitoring can be quickly automated and integrated with the existing automation system in a matter of days. 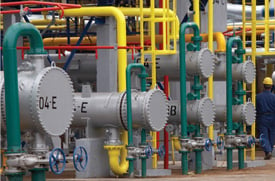 At one refinery, the #2 Crude Unit was subject to preheat train fouling. The refinery was unable to determine when to clean the heat exchanger for the greatest benefit. This lack of information prevented economic analysis planning, such as fouling degradation versus additional fired heater fuel required. An IIoT real-time temperature monitoring system was installed on the unit, which sent data to heat exchanger modeling software. Based on the analysis, the heat exchanger was cleaned on an as-needed basis, resulting in an estimated annual savings of $225,000 in maintenance costs, with further savings of $912,500 realized by preventing downtime (table 3). 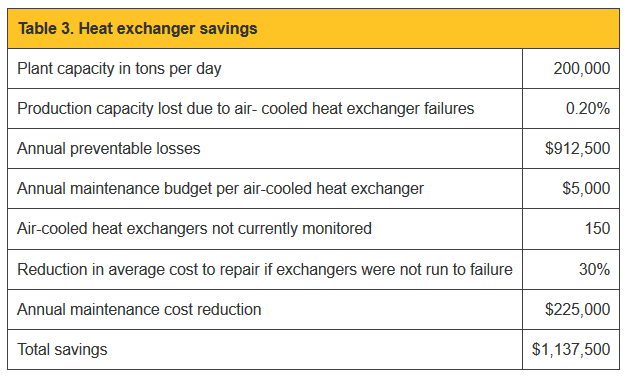 More than a buzzword

The IIoT is more than a buzzword. It is here, and plants are using it to realize value from the hundreds of millions of connected sensors currently installed, and the millions more coming online each year. Many of these new sensors are wireless, because they can be installed quicker and at less cost than their wired equivalents, often with no required downtime. These low-cost wireless sensors and accompanying analytics can dramatically improve plant performance, increase safety, and pay for themselves within months.

About the Author
Deanna Johnson, director of marketing communications for machine automation solutions at Emerson Automation Solutions, focuses on Rosemount products and pervasive-sensing strategies. Her previous positions included development of integrated marketing communications programs for Emerson’s oil and gas and refining industries, as well as work on WirelessHART marketing. Johnson started her Emerson career in 1996. She has an MBA with a marketing focus.

From ISA Connect: What are Some Standard Automation Career Paths?