IEC vs. NEMA Motor Controls: Select the Best Option for Your Application

END_OF_DOCUMENT_TOKEN_TO_BE_REPLACED

IEC vs. NEMA Motor Controls: Select the Best Option for Your Application

This excerpt is from the September/October 2014 issue of InTech magazine and was written by Brent Purdy, product manager at AutomationDirect. 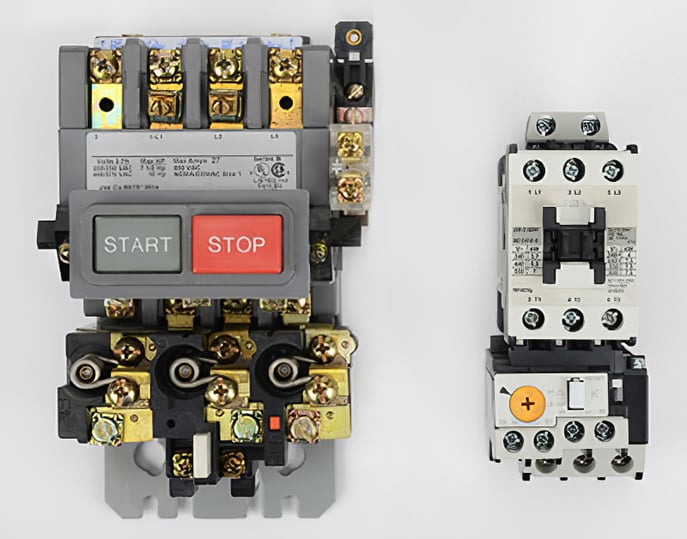 Figure 1. This NEMA starter and IEC starter are each sized for up to a 27-amp load, with the NEMA starter capable of a wider range of duty befitting its larger size and greater weight.

There is a wide range of motor controls available that meet one of the two dominant standards: National Electrical Manufacturers’ Association (NEMA) ICS 2 and International Electrotechnical Commission (IEC) 60947. NEMA and IEC standards evolved separately with distinct intentions, creating the differences apparent today. The NEMA philosophy was to design to a standard “frame” size to allow interchangeability among different manufacturers and to handle the worst-case applications. IEC, which originated in Europe, emphasized space and cost savings by applying only the required capacity to the load being served. Unlike NEMA, IEC does not categorize starters into specific frame sizes, but instead uses utilization categories (e.g., AC-3, AC-4) to rate devices.

NEMA devices under 100 A or 50 hp are generally twice the size and price of IEC devices. Consequently, IEC devices offer about double the selection of starter sizes between 2 and 900 hp, making proper component selection much more critical than it is with NEMA.

NEMA-type devices have a tougher, more robust design with more conservative ratings, but IEC, with its smaller size and lower cost, is the better option in many applications (figure 1). Some feel IEC devices cannot take abuse like a NEMA device, but proper selection of the starter and careful design of short-circuit and overload protection devices should provide satisfactory performance.

It is clear the NEMA standard wants to keep it simple, as there are 10 NEMA starter sizes between 2 hp and 900 hp, a range over which one IEC manufacturer has 20 sizes. The NEMA standard simplifies selection by offering devices suitable for a wide range of applications. The IEC standard has more starters, each suitable for a more specific and narrowly defined range of applications. This wide range of products makes it important to precisely design the system with consideration of duty cycle, motor horsepower, full load current, and other factors. The selection process is similar for both standards but more rigorous for IEC, and this difference often factors into the IEC versus NEMA decision.

NEMA and IEC starters are both rated for 1 million electrical operations, and the UL testing is identical for each. When selecting components, many designers stop at the two main differences between NEMA and IEC, size and cost. Although these are serious factors and the easiest to define, one should dig deeper into other factors affecting total life-cycle costs.

For a user with a well-defined application, IEC makes sense. The standard is a good fit for those users with the time and expertise to carefully design their motor control and protection circuits to precisely fit a well-known operating environment. That includes just about any original equipment manufacturer, because the extra upfront design cost will be quickly made up with less expensive IEC components.

For scenarios where motors are subject to frequent overload or where the motor load is less well defined, NEMA may be a better choice. For those doing a one-time design, particularly when operating parameters are less well known, it may be cheaper to just use NEMA and forego the precise design required for IEC. The table lists the leading factors favoring IEC and NEMA. 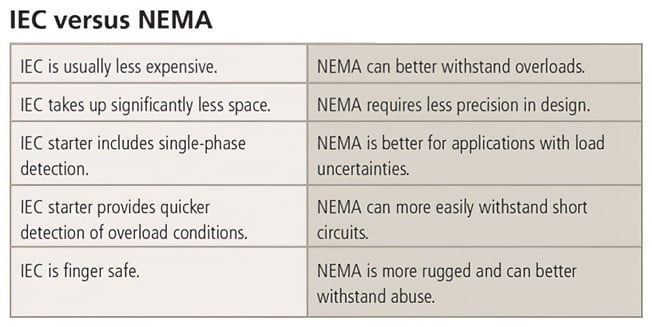 For example, if the maximum current is not well known, NEMA devices are often the best choice. A NEMA size 1 starter, with a maximum 10 hp at 480 V, has a continuous rating of 27 A, while an equivalent IEC device is rated for only 18 A, making it critical to know the exact characteristics of the load for IEC designs. In applications such as large undefined projects or systems that change duty and loading cycles frequently, the ease of specifying NEMA justifies the price and size restrictions. This is why the NEMA devices have a strong foothold in heavy industries such as petrochemical and steel.

NEMA devices also have more common and replaceable parts than IEC devices. So, when downtime is critical and a facility has a large installed base of units, this is an added benefit. IEC devices, on the other hand, are basically disposable below 100 A. This may be a hindrance or benefit depending on the user and the number and type of applications in a facility.

IEC starters require knowledge of the load and its duty cycle to be properly sized. For example, IEC starters list AC-1 and AC-3 utilization currents, which are the rated currents for totally different applications. Understanding the difference is essential to properly sizing a starter. A typical IEC 5-hp starter will be marked for 18 A (AC-1) and 7 A (AC-3). If an application involves frequent jogging or full voltage reversing, the starter may not be rated for that duty, so sizing the unit up one or two levels is advised.

NEMA starters, in general, are more robust. The springs, contacts, and other components can take more abuse, vibration, and shock. The starter coils are typically encapsulated to protect against contaminates, where IEC coils are only tape wrapped and coated. On the flip side, NEMA uses more coil power and needs more enclosure space and clearances.

NEMA starters are open design, so safety covers are often purchased separately or added in the field. IEC contactors and starters are typically IP20 finger-safe rated, which lends itself to a safer open panel design.

Finally, consider the modern control environment where motor control devices are integrated with the automation system. As compared to NEMA, IEC devices have many more options to network components together into a distributed control system using open fieldbus standards.

About the Author
Brent Purdy, PE, is a product manager specializing in power and circuit protection at AutomationDirect  Brent has 18 years of experience in the startup and operation of various power and automation systems in the food and beverage industries.