Ice Cream Castles in the Land of Automation

END_OF_DOCUMENT_TOKEN_TO_BE_REPLACED

Ice Cream Castles in the Land of Automation

This post was guest authored by Omer Bin Abdul Aziz, an electrical engineer for Avanceon.

On a flight back home, my plane passed above a thick band of monsoon clouds. With the worldly worries left thousands of feet down, I indulged myself in views out of my window seat. I was enjoying a warm cup of tea inside the comfort of an air conditioned cabin, while the freezing temperature outside caused vapors to coalesce into all forms of beautiful clouds. Only a few centimeters of glass separated me from the harsh, but beautiful surroundings. It must have been the umpteenth time I was looking at the clouds from the window like this, but  I never grow tired of the views of the fluffy cotton candy clouds. In my childhood, like all of us, I used to make all sorts of shapes out of the moon-lit silver lining of the clouds. I still remember the first time I saw them up, close and personal in an airplane. It made me feel more excited than I would have felt by meeting Marilyn Monroe! All those fairies and animals were there right next to me and I was flying through them. I realized how we have brought the concept to the computer world. Maybe someone thought of the name “cloud computing” while on a plane flight as well. 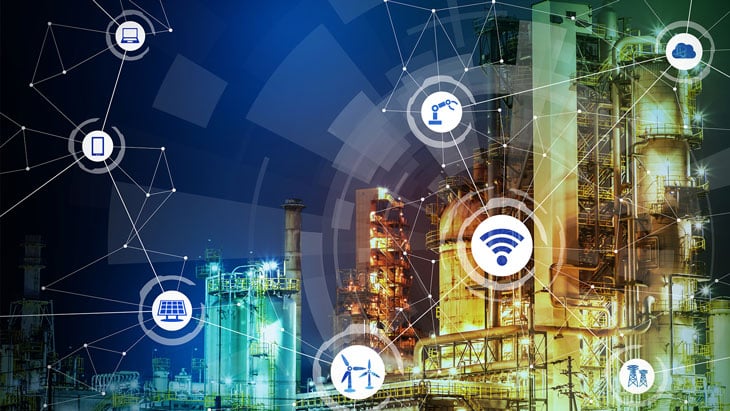 So, what is it with clouds and computing? There was a time when they used to rain and snow on everyone. But now there is more to it than just an Ice cream castle. The word processor that I am using right now lives in a cloud (yes, you are thinking next I am going to tell you I met Batman for dinner yesterday). I don’t have to worry about installing the software on my laptop, purchase upgrade licenses and keep backups. It is all managed by the cloud! I only pay for the time I use the cloud. In fact, for this word processor, I only pay for the Internet connectivity cost and nothing else.

The same advantages we can use for cloud computing in the IT world can be reaped in the world of automation and control. We have different types of clouds – so why can’t we have an IT cloud system and an I&C cloud system? The concept is difficult to brace right now in the automation world, but then, who would have thought a hundred years ago that we will be flying through the clouds.Yesterday’s fairy tale become today’s reality.

Let's imagine we had a time machine and flicked the dials to 2030 (not pm, but year 2030). How would the land of automation look like in year 2030? What follows is an engineer’s rendition and not that of a politician. You can have faith therefore.

Its 30 minutes past midnight.The room lights start brightening up slowly and soft buzzer sounds. The sheets move a little, but no one wakes up. The lights brighten up a bit more and the buzzer starts sounding more like a persuading spouse. That seems convincing enough for Ray to wake up.

Sitting up in his bed, he moves his glove covered hands in a sweeping gesture. Air in front of him lit up and what seemed like a computer screen popped up. With a couple of more gestures, face of a fifty year old man appeared on the screen. He spoke with a heavy accent

‘Good morning Ray!’
‘Is that why you woke me up Chris?’
‘True, but that’s not the whole truth!’
‘How are you these days Ray? Haven’t seen you around alot.’
‘Well, just me and my midlife crisis. Nothing special to bother you with so early in the morning. But I hope its something important that made you do so!’
‘Yes it is. I’ll cut the chase and tell you what it is all about’
‘Much appreciated. Retorted Ray blocking a yawn with his hand.’

Chris worked for Grever Inc., a firm that specialized in the manufacturing of compressor units. He is a veteran, working for the past 30 years at Grever. Grever had a manufacturing facility in Turkmenistan. Over the past two days, Chris was engaged in a post mortem exercise at an oil pipeline company that had a compressor shutdown. Standby arrangements ensured uninterrupted supply of oil to tankers. No one would dare think of a total shutdown of $430 per barrel black gold. Chris found out that the bearing temperature in the aft section of the compressor rose abnormally and was the culprit behind this shutdown.  He believes that the problem may be because of a design change that took place two years ago in this specific model. He will have to refer the details back to the factory to be sure about it. However, he came to know that about 600 such units have been deployed in the past two years. He wanted to add a rate of temperature change alarm so that operators can get an early warning.  He also wanted an initial incident report to be sent to all clients.

Ray is the person who can get this done. He maintains the online library of all equipment manufactured by Grever. Each compressor unit has a global object in this library. The visualization front end software installed at each client site pulls the latest global object from this library whenever a change occurs.

Ray will add the new parameter in the global object library for the specific compressor unit. Updates of the global object will then be available to all cloud based DAS systems. As soon as the update was released, operators world over will see this new global object. They will get a prompt about the usefulness of the new parameter. In case the parameter digressed to the warning levels, an automatic message would be sent over to Grever support network, who will get in touch with the specific plant’s maintenance team for further troubleshooting.

Chris always liked to talk about how things were in Past. He didn’t miss an opportunity this time either! While Ray was making changes at his end, Chris started talking about how difficult it would have been to implement this change in the past when the concept of cloud computing was not all that savored. Back then, if they discovered such an anomaly, they had to write emails to all the facilities that purchases their units and were still under warranty. It would have taken anywhere from a few weeks to a few months, before the changes were implemented in the in the locally hosted data acquisition systems.

Ray moved his hands dexterously to make the changes through his SOA (Spatial Operating Environment).

‘I’m done Chris.  You will soon start getting the updates, once the QA team is done with the reviews.’

‘Thanks Ray. Isn’t it amazing how easy it has become to get the changes across to end users with cloud computing. I can’t get Joni Mitchell out of my head when I think of this.  I’ll send a link to her song to your home theater.’

‘I never asked for it! All I want is a good night sleep. Good night!’

Although Ray never mentioned it to Chris, but he sort of liked the odd and old selections Chris would send to him every now and then.

Joni Mitchell’s voice filled the room as he sank back in his bed with lights dimming out.

“Rolls and flows of angel hair,
Ice cream castles in the air,
Feather canyons everywhere,
I’ve looked at clouds that way.
But now they only block the sun.
They rain, they snow on everyone.
So many things I would’ve done
But clouds got in my way.
I’ve looked at clouds from both sides now,
From up and down and still somehow
It’s clouds’ illusions I recall.
I really don’t know clouds at all."

(Check this link for song: http://www.youtube.com/watch?v=bcrEqIpi6sg)

Sleep disappeared from his eyes as he listened to the rest of the song. He said to himself

Omer Bin Abdul Aziz is a graduate in electronics engineering and has been associated with the field of industrial control and automation since 2000. He works for Avanceon as manager of engineering operations.  After office work, he spends a busy night life as an amateur astronomer.