How to Use Model Predictive Control to Improve the Distillation Process

END_OF_DOCUMENT_TOKEN_TO_BE_REPLACED

How to Use Model Predictive Control to Improve the Distillation Process

This article was written by Bill Poe, a senior technical sales consultant at AVEVA

Distillation columns are extensively deployed in the chemical process industries when there is a need for separation of components that have different boiling points. Typically, a mixture of components, usually in liquid form, is introduced into the middle of a trayed or packed column.

Through successive vaporization and condensation steps, the low-boiling components are concentrated at the top of the column, and the high-boiling components are concentrated at the bottom of the column. Examples are the separation of crude oil into components, such as gasoline, kerosene, and diesel fuel; the separation of raw natural gas into methane, ethane, propane, butanes, and natural gasoline; and the purification of other mixtures into saleable products. The distillation process is naturally multivariable and repeatable.

Model predictive control (MPC) is a well-established technology for multivariable processes that was originally developed in the 1970s with the introduction of digital computer-based control systems. This technology provides control using targets, constraints, feedforward predictions, and feedback to handle multivariable processes with delay and strongly interactive loops, as well as longer dynamic responses.

The basic model predictive control technique incorporates normalized step response models for the controlled variables as a function of the manipulated variables (MVs) and feedforward variables (FVs). CVs are the objectives of the multivariable control strategy and include targets as well as constraints. MVs are the output of the multivariable controller and are typically set points (SPs) for basic proportional-integral-derivative (PID) controllers.

These linear models permit the application of standard matrix algebra to estimate the MV changes required to keep the CVs within their limits and when degrees of freedom are allowed. This technique often incorporates an objective function to minimize the output error over the controller time horizon. MPC is an advanced supervisory control method that is the middle level of a multilayer control hierarchy (figure 1) consisting of: 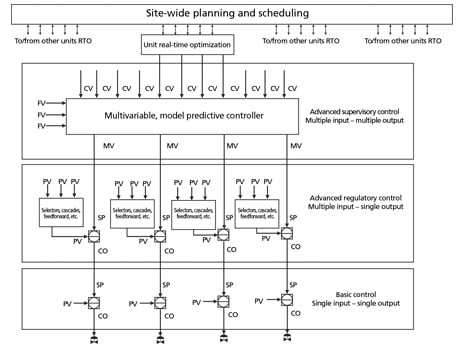 This hierarchical approach is applied by analyzing the causes of the disturbances in each part of the process and then layering the solutions that deal with the disturbances from the bottom up. Each layer adds complexity, and its use depends upon the nature of the disturbance and the preferred response. Basic control includes single input – single output systems connecting field measurements to field actuators through PID controllers (figure 2). This layer provides the foundation. Without effective basic control, the higher levels will be ineffective. 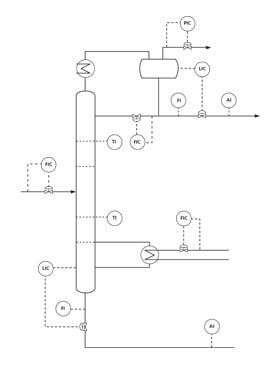 One of the main weaknesses of PID is its inability to maintain stable operation when there is significant dead time or lag time between the valve movement and the effect on the set point. For example, in a distillation column, the reflux flow is normally adjusted to maintain a stable key column tray temperature. If the tray is well down the tower, an unmeasured feed composition change may upset the tray temperature.

The controller responds by adjusting the reflux flow, but there may be dead time of several minutes before the tray temperature responds to the change. Many distillation towers have longer lag times and may take from 30 minutes to multiple hours for the full effect of the disturbance and the MV moves to fully play out. During the dead time and lag time, the controller’s integral action will try to return the process variable to set point. These types of loops are extremely difficult to tune in a PID controller.

The controller is typically detuned except for heavy derivative action to prevent overshoot. An example of advanced regulatory control (ARC) is composition control of distillation tower product streams (figure 3). The first type of disturbance that typically occurs is caused by changes in ambient conditions, which change the temperature of the column reflux and overhead product. This changes the degree of column separation and product qualities. 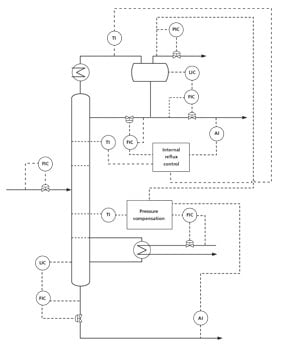 This type of control has improved stability by responding faster to disturbances caused by changes in ambient conditions. There are multiple inputs to the control, but only one set point for the reflux flow controller. Further stabilization of the overhead product composition is achieved by controlling a key temperature in the upper part of the tower, since temperature at constant pressure is directly related to composition. When the tower pressure varies, which often happens through a pressure minimization strategy to save reboiler heat input, then the key temperature should be corrected for pressure variations.

This control can adjust the set point of the IRC to maintain a constant pressure-corrected temperature (PCT). Predictive models for disturbances, such as feed rate changes, and interactions, such as pressure minimization (which is typically a constraint control) and reboiler heat, can be added at the next level (figure 4). Further improvement in composition control can be attained by developing a prediction of the product composition using real-time process measurements that affect PCT, and then using this prediction to adjust the set point of the PCT. This type of correlation is known as an inferred property or soft sensor. It may be biased based on lab or online analyzer updates that compare the predictions and actuals. 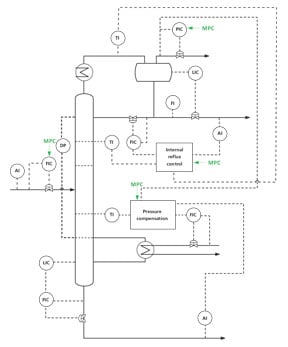 Some of the CVs in the MPC can be product compositions that directly relate to profitability, and some MVs could be the PCTs. The lower levels can control the PCT and IRC, typically in the control system. This results in a multiple-cascade design of an inferred property adjusting a PCT that adjusts an IRC that adjusts the reflux flow.

Other CVs as constraints and additional MVs that affect the constraints will be included in a true multiple input – multiple output (MIMO) configuration of the MPC. The MPC algorithms recognize degrees of freedom and may relax a target briefly if all of the MVs are required to satisfy constraints. Model-based control benefits have been proven repeatedly. They generate high rates of return on investment. Typical benefits include:

For distillation operations, quality control can also mean reducing quality “giveaways.” Many major process units in the chemicals and oil and gas industries, such as crude distillation and vacuum towers, natural gas liquids recovery and fractionation, gas plants associated with petroleum refining units, the cold side of ethylene plants, and other chemical units, use MPC technology. The main reasons why MPC technology is popular are:

MPC can provide significant control improvements over PID control for a single column in most cases, but the advantages are even greater when applied to an entire unit. The advantage of MPC applied to distillation columns is greatest when applied to a series of columns as an entire separation train. The MPC controller can efficiently operate the system of columns against the operating constraints to maximize the throughput for the system.

For a typical separation train, there are a number of constraints that may potentially limit the overall process throughput. As a result, there are a large number of combinations of constraints that must be considered if the controller is to maximize the throughput for the full range of operation. Advanced PID constraint controllers applied to this problem require a separate control configuration or complex logic for each combination of operating constraints.

These strategies are difficult to understand and tune. On the other hand, an MPC controller can directly handle the full range of combinations of operating constraints with a single MPC controller. In addition, the MPC controller is much easier to maintain than a custom-built advanced PID controller for such a complex system. For example, a vacuum distillation unit (VDU) that is receiving reduced crude from the crude distillation unit (CDU) has a heater skin temperature constraint. Unless the two columns are controlled as part of one application, it will be difficult to handle the following scenarios:

The combined CDU/VDU application takes advantage of the controller’s ability to push the process unit to operate closer to its constraints. Although the combined application achieves an overall operational objective, the operator may be more comfortable displaying the crude unit control application in terms of operating groups, such as crude heater, crude distillation column, vacuum heater, and vacuum distillation unit. MPC contains algorithms that allow limited, linear optimization by operating at constraints using the least costly combination of manipulated variables through linear programming or quadratic programming methods.

The more complex and nonlinear the system becomes, the more valuable real-time optimization (RTO) systems are in setting CV targets for the MPC to move operations in a more profitable direction. Profitability can be further enhanced, and the MPC contains the “hooks” to accept guidance from the RTO. Planning and scheduling systems typically provide operating targets based on additional marketing, commercial, and logistical considerations as well as on multi-unit and multi-business interactions. These targets may become constraints for the real-time optimizer or directly to the MPC when RTO is not present. Meeting planning and scheduling objectives are much more difficult without MPC.

One criticism of MPC is its inability to handle unmeasured disturbances. However, auto regressive moving average–type models (a higher-order model than the typical finite impulse response models) have been developed to respond reliably to unmeasured disturbances. Controller benefits are sustained by measuring the control performance online and improving the constraint limits or model fidelity. MPC key performance indices (KPIs) focus on calculating the historical variance in the error between target CVs and actual CVs.

Degradation in the long-term trend of the KPIs suggests that a careful process analysis is needed to identify the cause of the degraded performance and the corrective action needed to return the control to its original performance level. MPC is not the right tool for all distillation column control challenges, but if used wisely and prudently, it can change good control to great control. In conclusion, the following conditions may indicate benefits from MPC for distillation towers:

About the Author
Bill Poe is a senior technical sales technical consultant at AVEVA. Before joining Aveva, Poe held positions at Schneider Electric, Shell Oil Company and GE. He received the GE Innovators Award in 1999 and attained the Invensys Circle of Excellence in 2011. Poe holds a bachelor’s degree from Georgia Institute of Technology and an MS from Columbia University, both in chemical engineering.