How to Tune PID Controllers on Self-Regulating Processes

END_OF_DOCUMENT_TOKEN_TO_BE_REPLACED

How to Tune PID Controllers on Self-Regulating Processes

Regardless of the tuning of the PID controller, the control performance is limited by the performance of the instrumentation and final control element. Before tuning a controller, it is helpful to have an understanding of the process and to verify the performance of the instrumentation and final control element, usually a control valve. The control valve should have a small deadband and resolution—another topic of discussion! It should have an appropriate and consistent flow gain. It should have a response time that is appropriate for the process performance requirements. ANSI/ISA-75.25 and the EnTech Control Valve Dynamic Specification V3.0 are excellent sources of information on this topic. Also, the control scheme should be reviewed to make sure it is an appropriate, linear, control scheme for the application. Finally, the interaction of the control loop to be tuned with other control loops should be reviewed and understood. The desired “aggressiveness” of the loop tuning should be based on the interaction of the control loop with other loops and the consequences of movement of the controller output.

Tuning for a self-regulating process

A tuning methodology called lambda tuning addresses these challenges. The lambda tuning method allows the user to choose the closed loop response time, called lambda, and calculate the corresponding tuning. The lambda closed loop response time is chosen to achieve the desired process goals and stability criteria. This could result in choosing a small lambda for good load regulation, a large lambda to minimize changes in the controller output and manipulated variable by allowing the PV to deviate from the set point, or somewhere in between these two extremes. More importantly, the lambda of the loop can be used to coordinate the responses of many loops to reduce interaction and variability.

Lambda tuning for self-regulating processes can result in a closed loop response that is slower or faster than the open loop response time of the process. Though lambda is defined as the closed loop time constant of the process response to a step change of the controller set point, the load regulation capability is also a function of the lambda of the loop. The response to a step set point change and a step load change for a self-regulating process response with lambda tuning is shown in figure 2.

Self-regulating process responses typically include dead time and can usually be approximated by a “first-order” or “second-order” response. This article describes the lambda tuning procedure when the process response can be approximated by a first-order-plus-dead-time response. The lambda tuning for a second-order-plus-dead-time response will be covered in future articles.

Figure 3 shows the dynamic parameters of a self-regulating, “first-order-plus-dead-time” process, which include dead time (Td), in units of time; time constant (tau), in units of time; and the process gain (Kp), in units of percent controller PV span/percent controller output span. Typically several step tests are performed; the results are reviewed for consistency; and the average process dynamics are calculated and used for the tuning parameter calculations. If the controller output goes directly to a control valve, any significant deadband in the valve will reduce process gain if the output step was a reversal in direction. If the controller output cascades to the set point of a “slave” loop, the slave loop should be tuned first.

This blog post is Part 2 in the loop tuning series. Click these links to read Part 1 and Part 3.

If the potential change in process dynamics is unknown, starting with lambda equal to three times the larger of the dead time or time constant will provide stability even if the dead time doubles and the process gain doubles. If it is desirable to coordinate the response of loops to avoid significant interaction, the lambda of the interacting loops can be chosen to differ by a factor of three or more. For cascade loops, the lambda can be chosen to ensure the slave loop of the cascade pair has a lambda 1/5 or less of the master control loop.

The lowest recommended lambda for a first-order-plus-dead-time self-regulating process is equal to the dead time, although this provides a very low gain and phase margin. Thus, a smaller increase in the dead time or process gain can cause instability of the loop.

From a stability standpoint, there is no upper limit on the lambda. If the lambda is not chosen based on a coordinated response, a good starting point for stability is:

The tuning performance can be monitored for a time period and adjusted to be a shorter or longer lambda as needed.

The final step is to calculate the tuning parameters from the process dynamics. Care should be taken to use consistent units of time for the dead time and the lambda. For a first-order-plus-dead-time process response (no significant lag or lead), the controller gain and reset times are calculated with the following equations. The derivative time is set to 0. These equations are valid for the standard (sometimes called ideal, noninteractive) and series (sometimes called classical, interactive) forms of the PID implementation. Note that only the controller gain changes as lambda (λ) changes. The integral time remains equal to the time constant regardless of the lambda chosen.

Because there are no “loop response coordination” requirements, the initial lambda is chosen to be 3 * (larger of dead time or time constant) = 3*20 seconds = 60 seconds.

Now, the tuning can be calculated with the lambda tuning rules. 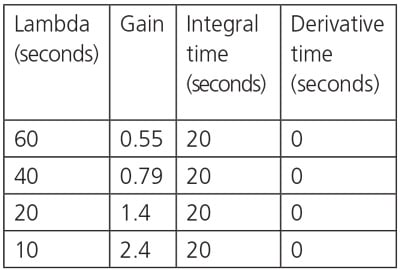 Figure 6 shows the response to a step set point and a step load change for each of the lambda values in the table. Note that the tuning is stable for much shorter lambda values than the starting point of 3 * (larger of dead time or time constant). However, this is with perfectly constant process dynamics in a simulator. Additional tests on a real process, at different operating conditions will help determine the consistency of the process dynamics.

Most published PID controller tuning methods are designed for optimum load regulation, not necessarily optimum process performance. The lambda tuning method provides the ability to tune the PID controller to achieve process performance goals, whether they are maximum load regulation or a coordinated response to other loops. Note that the lambda tuning method for integrating processes can also be used for a lag dominant, self-regulating process to achieve excellent load regulation. This technique and tuning for more complex dynamics will be covered in a future article in this series.

James Beall is a principal process control consultant at Emerson Automation Solutions with more than 35 years of experience in process control. He graduated from Texas A&M University with a bachelor’s degree in electrical engineering and worked for Eastman Chemical Company until 2001, when he joined Emerson. His areas of expertise include process instrumentation, control valve performance, control strategy analysis and design, advanced regulatory control and multivariable, and model predictive control. He has designed and implemented process control improvement projects in the chemical, refinery, pulp and paper, power, pipeline, gas and oil, and pharmaceutical industries. Jamesl is a member of AIChE and ISA, and chair of ISA committee ISA75.25, Control Valve Dynamic Testing.