END_OF_DOCUMENT_TOKEN_TO_BE_REPLACED

This article was written by Jim Colby, senior business development manager for the electronics business unit of Littelfuse, Inc.

The original Industrial Revolution marked the transition from making things using human and animal power to making them with machines by harnessing water and steam power. The ability to use electricity for the mass production of goods made the second Industrial Revolution possible; the third came from using computers to automate production processes. The fourth Industrial Revolution marks the transition from “dumb” machines (i.e., assembly lines, standalone automated painters, welders) to ones that are made smarter and self-configurable. They incorporate sensors and processors and, more importantly, are connected together and to the operations center via the Industrial Internet of Things (IIoT).

Sometimes known as Industry 4.0, the fourth Industrial Revolution has the goals of making production more efficient, cost-effective, and flexible and delivering a better product to the customer in less time. However, the increased connectivity that the IIoT brings to factory automation systems also makes these systems particularly vulnerable to electrical damage from a variety of threats. These threats include electrostatic discharge (ESD), electrical fast transients (EFT), cable discharge events (CDE), lightning-induced surges, as well as system-induced voltage transients that occur when large motors turn on or off via both data and power connections (e.g., industrial Ethernet, Power over Ethernet [PoE], CAN bus, RS-485, Profibus and fieldbus).

The engineers designing and implementing automation systems in industrial settings need to be aware of the appropriate circuit protection solutions, such as transient-voltage-suppression (TVS) diodes, TVS diode arrays, gas discharge tubes, and protection thyristors, that can help reduce (or eliminate) the risks involved. This article is an overview of circuit protection solutions that are particularly appropriate for a variety of industrial automation applications and their advantages for ensuring the reliability of the systems driving the factories of the future.

Industrial Ethernet (IE) combines standard Ethernet protocols with rugged connectors and high-temperature switches. Components used in industrial applications must be able to withstand temperature extremes, humidity, and vibration significantly beyond the ranges for equipment intended for installation in typical office environments. Industrial Ethernet networks must interoperate with both current and legacy systems and must provide predictable performance and maintainability. In addition to physical compatibility and low-level transport protocols, a practical industrial Ethernet system must also provide interoperability of the higher levels of the open systems interconnection (OSI) model. An industrial network must provide security both from intrusions from outside the plant and from inadvertent or unauthorized use within the facility. Figure 1 illustrates one approach to indoor long-haul data-line (not PoE) protection against lightning-induced transients, ESD, EFT, CDE, and power faults. It is appropriate to use in a factory automation environment. 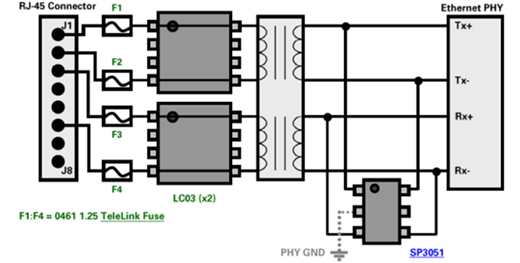 Figure 1. One approach to indoor long-haul Ethernet data line protection against lightning, ESD, EFT, CDE, and power faults. The four data lines shown (Tx± and Rx±) are protected against intrabuilding lightning transients. The LC03 TVS diode array diverts the majority of energy away from the transformer, but any common mode energy that does get coupled across the transformer interwinding capacitance is diverted to GND by the SP3051 TVS diode. This component can be connected to ground on the PHY side of the transformer because the IEEE 802.3 isolation requirements are met by the transformer itself.

Figure 2. For applications that are subject to severe levels of lightning-induced transients that exceed the limits of today’s silicon technology, gas discharge tubes (GDTs) are often recommended to protect the transformer. The GDTs are connected between the data pair (and not GND) to be compliant with the IEEE 802.3 standard. For example, the SL0902A90SM GDTs shown here are used in addition to extremely robust protection components, such as two LC03 series TVS diode arrays, to suppress the let-through energy at the PHY. The F1–F4 fuses provide overcurrent protection against power faults.

Power over Ethernet describes any of several standardized or ad hoc systems that pass electrical power along with data on Ethernet cabling. This allows a single cable to provide both a data connection and electrical power to a variety of devices, like IP security cameras. Unlike the USB bus, which also powers devices over the data cables, PoE allows extended cable lengths. Power may be carried on the same conductors as the data or on dedicated conductors in the same cable. In a PoE scheme, the device that receives the power is called the client device or powered device (PD), and the device supplying the power is the power sourcing equipment (PSE). “Mode A” power is supplied over the “active” data pair found in 10BaseT or 100BaseTX interfaces. “Mode B” power is applied over the unused pair for 10BaseT and 100BaseT interfaces. For 1000BaseT and 10 GbE applications, all wire pairs are used for data transfer, so there are no “spare pairs.” Figure 3 illustrates circuit protection schemes for PoE-powered device and power supply equipment. 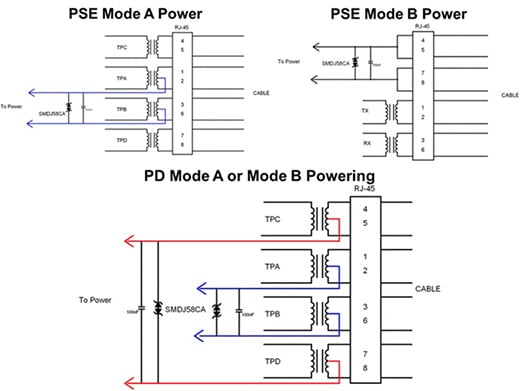 Figure 3. A properly rated transformer and power supply provide the required isolation for IEEE 802.3 compliance. For the PSE, TVS diodes are used on the specific pairs that will provide the power. Shown here are 1,500 W versions for high-exposure cable and equipment installations. For short cables or installations with low lightning exposure, lower-power 600 W or 400 W components can be used. For the protection of the PD, both pairs need to be protected, as it will not be known ahead of time which pairs will provide power. TVS diodes should be selected based on the expected surge exposure level.

Industrial Ethernet and PoE are far from the only communication buses relied upon for factory automation system coordination. The controller area network (CAN) bus standard allows microcontrollers and devices to communicate with each other in applications without a host computer. Although not nearly as fast as Ethernet, CAN bus is highly robust and capable of communicating data reliably over substantially longer distances than Ethernet. That makes it a good choice for applications that require communicating instructions or returning data from separate pieces of equipment located some distance from each other. Figure 4 shows a typical CAN bus application example. 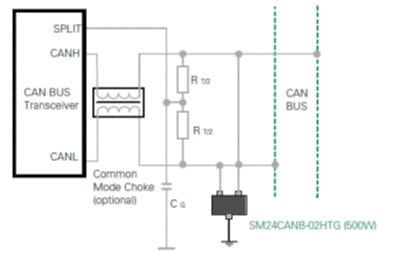 Figure 4. The TVS diode array is designed to protect CAN bus lines from damage due to ESD, EFT, and surge transients. It is suited for longer cable runs or cables that must be located close to power cables.

Much like CAN bus, RS-485 is highly robust and lets industrial users transmit data without degradation over longer distances, but it is somewhat faster than CAN bus. In industrial settings, it is often used to control lighting, security cameras, and fire detection systems. Figure 5 illustrates one type of circuit protection for RS-485 ports subject to ESD or low-level transients due to lightning-induced surges. Figure 6 represents a higher level of protection.

Communications using industrial networking is the backbone of automation and will grow in importance with future factories. Circuit protection technology properly applied is important to maintain conductivity and protect equipment.

About the Author
Jim Colby is senior business development manager for the electronics business unit of Littelfuse, Inc. His responsibilities include identifying and developing strategic growth markets and introducing new products into those markets. He received his BSEE from Southern Illinois University (Carbondale) and MBA from Keller Graduate School of Management (Schaumburg). He has been with Littelfuse for more than 17 years and in the electronics industry for more than 25 years.

How to Upgrade Legacy Equipment for an Industry 4.0 Factory

Nowadays, all process industry equipment is furnished with controllers that allow the equipment to operat...
Abhishek Sharma May 20, 2022 5:30:00 AM