END_OF_DOCUMENT_TOKEN_TO_BE_REPLACED

This is an excerpt from the January/February 2014 issue of InTech magazine by Bill Lydon, InTech’s chief editor. To read the full article, please see the link at the bottom of this post. 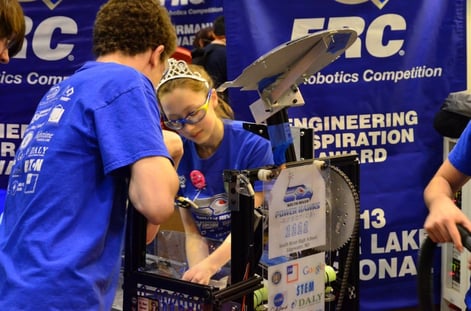 build science, engineering, and technology skills, that inspire innovation, and that foster well-rounded life capabilities, including self-confidence, communication, and leadership. The FIRST Robotics and other programs are designed to accomplish this mission. The Automation Federation (AF) and ISA are supporting FIRST as strategic alliance partners.

FIRST's programs give young people knowledge and experience to make informed decisions about pursuing opportunities in science, technology, and engineering. With support from three out of every five Fortune 500 companies and $14 million in college scholarships, the not-for-profit organization hosts the FIRST Robotics Competition (FRC) and FIRST Tech Challenge for high-school students, FIRST LEGO League for nine- to 14-year-olds (nine- to 16-year-olds outside the U.S. and Canada), and Junior FIRST LEGO League for six- to nine-year-olds.

Why should you care?

Using technology to advance the economies of the world will require a pipeline of knowledgeable, motivated, and enthusiastic talent. Dr. Peter Martin, Invensys vice president, gave a passionate keynote at the ISA Automation Week 2013 conference, "The Future of Automation," describing how automation can solve the world's biggest challenges, including efficient energy, safe water, food production, health improvement, and a clean environment. For example, Martin noted over half a million babies a year die because of tainted water. That is inexcusable, since this can be changed with the application of technology. We need to motivate more young people to join the automation profession.

Danaca Jordan, staff engineer at a major chemical company and attendee of ISA Automation Week 2013, became interested in automation due to her FIRST Robotics experience. She related the excitement of those events. In preparation for each tournament, members of the CRyptonite team would dye their hair bright green. Parents, friends, and fans (i.e., siblings) would wave signs, wear green shirts, and throw beads while they cheered them on. She wore a nylon fluorescent green cape with the CRyptonite logo her FIRST team created. Also, the team had the disc jockey at the event blast the song "Kryptonite" by the music group 3 Doors Down every time their robot took the field.

As a senior, she and the co-captain of the team would talk to the technology judges, selling them on the team's new designs while the driving team did last-minute maintenance. She noted that it has been a decade since she was a member of FIRST Robotics Team #624 from Cinco Ranch High School, but she still remembers the competitions and six-week robotic build phases as the most exciting part of high school. Jordan said this program was the reason she went into technology and earned a bachelor of science in chemical engineering at the University of Houston.

To read the full article on how FIRST inspires and educates youth to become automation professionals, click here.

About the Author
Bill Lydon is chief editor of InTech magazine. Lydon has been active in manufacturing automation for more than 25 years. He started his career as a designer of computer-based machine tool controls; in other positions, he applied programmable logic controllers and process control technology. In addition to experience at various large companies, he cofounded and was president of a venture-capital-funded industrial automation software company. Lydon believes the success factors in manufacturing are changing, making it imperative to apply automation as a strategic tool to compete.
Connect with Bill: