END_OF_DOCUMENT_TOKEN_TO_BE_REPLACED

This guest blog post is part of a series written by Edward J. Farmer, PE, author of the new ISA book Detecting Leaks in Pipelines. To read all the posts in this series, scroll to the bottom of this post for the link archive.

Reasons to do leak detection generally include dealing positively with accidents, discouraging theft, and mitigating other issues a risk analysis may identify. There is generally one more motivation for effective safety-oriented design – meeting the formal requirements that apply to your situation.

In the U.S., the federal government regulates pipelines via Code of Federal Regulations (CFR) 49: Transportation, Parts 178 to 199. Many states, and even smaller political subdivisions, also regulate pipeline operations. Sometimes these regulations overlap, sometimes they flow from completely different points of view. In one offshore project I recall, 22 agencies had interest in regulating features of the project. Dealing with this became a major and often-confusing task, brought to a good outcome by major effort of some special people. 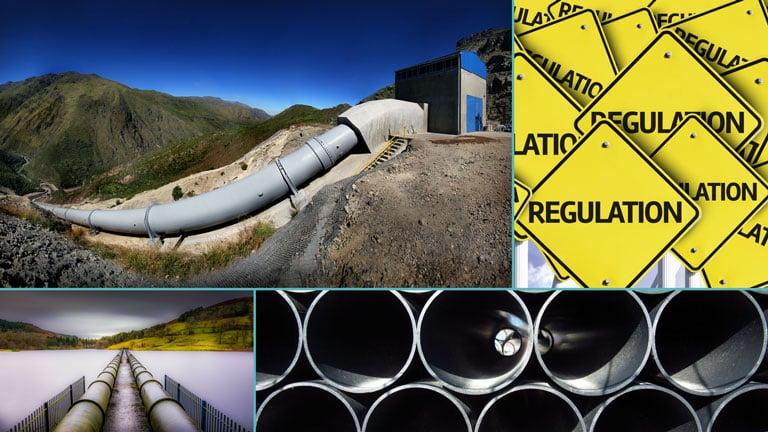 Conditions encountered by pipelines in the U.S. are diverse and the complexity motivates broad and cautiously general requirements. This is not the case at the borders of all sovereign nations.  Divergences in what constitutes appropriate regulation can be profound. Sometimes experience has focused government interest on specific situations, such as natural gas lines in Europe, or subsea crude oil lines in the fishing regions of the Arabian Gulf. In general, control flows to the sovereign government of a pipeline’s physical location, and the merging of points-of-view into specific requirements palatable to all involved can be complex. This often invites returning to the fundamental issues and experiences that spawned the regulations in the first place. Ultimately, everyone expends the effort to understand and address the collective issues.

In Detecting Leaks in Pipelines, I discuss some of the issues, the motivations, and the outcomes. Here, I want to introduce the concept, albeit somewhat superficially, by pointing out some of the features of the overarching U.S. federal regulations. Hopefully, this illustrates the scope and detail of the “big picture” through its scope and direction.

For pipelines, the most pertinent U.S. regulation parts are 190 through 199, which include:

Note that some of the segregation is by pipeline purpose, and some is by issue or activity. Much of this has been assembled and organized slowly, carefully, and competently over long periods of time and considerable, often painful, experience. At its best, there is wisdom in here, but almost always there is provocation and stimulation for focused, insightful, and productive thought and analysis. Some of the requirements are prescriptive, some are results-oriented. Most provide the designer and operator with insight on the pertinent issues.

Let’s start with Part 192 which pertains to gas pipelines, but realize the regulations include a similar treatment for liquified natural gas (LNG), oil pipelines, and hazardous liquids.

In these 16 sections (categorized A through P in the regulation), there is substantial explanation of what terms used in the regulation mean, where they apply, and references to other relevant regulations. It moves on from there to pipe and other material selection, design issues, construction issues, operating issues, and maintenance. For the most part the requirements are either fundamental (e.g., “suitable for…”) or as necessary to meet various performance requirements. In other words, they are more results-oriented than specific.

While the regulation is beneficial to the design process because of its focus on the spectrum of involved issues, it is not a design manual. An incompetent person could not design a suitable pipeline by applying the information contained in the regulation. On the other hand, the regulation prescribes some design criteria for some materials and components that are useful to designers in making decisions about such things as wall thickness or corrosion resistance.

For the most part this regulation pertains to issues common in all pipeline work in the specified category, and with the intent of producing a safe and acceptable result. The overall intent, though, is to encourage consideration of the issues with the regulatory goal of producing a safe and workable design. It is not a checklist that ensures doing all the items will produce a safe design.

The intent of a regulation

Over the years I’ve been involved in several projects that, for one reason or another, involved an adventure in somewhat uncharted territory. In one case, the designer was concerned about corrosion control under some operating conditions that generally didn’t, but could, occur. A potential consequence of very many of these occurrences could be a dramatic reduction in the service life of the pipeline. A component of the solution involved some unusual pipe of unusual metallurgy. The designer was able to position the specially fabricated pipe within all the otherwise relevant requirements of the regulation to produce a result compatible with the intent. I was much younger then and far more easily impressed, but recall gaining great respect for the regulation from the way that work developed.

In general, the federal pipeline safety regulations apply to pretty much anything, but do not explore all situations much more than generally. There are often specific requirements in geographic areas with special needs or requirements. Such local requirements typically reference or include federal regulations, but include extra issues pertinent to the locality. These special situations might include sensitivity to certain kinds of marine traffic or erosion, exposure to various sub-surface or weather-induced instabilities, soil with some particular element in it, sensitive areas (e.g., fish hatcheries) nearby, and so on.

In one off-shore production project in an environmentally sensitive location, the very politically astute government established an “everyone has a voice” dictum that involved a panel of agencies with one interest or another in the project. Dealing with this can involve a lot of time and political sensitivity. When confronted with a similar situation, another developer looked at the difficulty and cost, and opined that the purpose of the requirements was solely to provide sufficiently onerous conditions that the project would just cancel (and it did).

Leak detection is usually a component of local requirements. Sometimes, as in the state of Alaska, the requirements make sense and can be implemented. In other cases, they involve hopelessly useless performance requirements that can’t be met by any known technology, either for the purpose of discouraging development, or for providing a legal path to blame in the event of any related accident damage. If the locality wants the project to be built there will be active interest and participation in an effort to identify the risks and appropriate measures for prevention, detection, response and mitigation. On the other hand, if every solution exposes another problem that may be a message disclosing what the future will entail.

Focus on risks and outcomes

In one multi-partner development project, one of the partners, the managing partner, was striving for a system that comfortably met all requirements and even improved on them in some ways. One of the more cost-sensitive partners argued at every turn about cost and necessity. One argument involved the time to detect a leak. With some advanced but expensive computing and communications equipment detection time could be reduced from “an hour or so” to a few minutes.

A huge and somewhat heated argument developed over cost and benefit in which the objector argued that any significant spill would be detected by other means in routine use, such as the service boats that constantly ran from shore to the platforms, or from the helicopters that shuttled crews back and forth, or just from casual ship and boat traffic in the region. The managing partner proposed that perhaps they should eliminate automatic leak detection all together and simply wait for the news media to pound on the door and demand interviews about why the harbor was filling with crude oil.

On the other hand, some risk analysis should be involved in all projects with dangerous products and sensitive situations. BP always encouraged us to develop a design that met all the known requirements and then augment it here and there to produce the best possible monitoring system for the project – in other words, they were striving to get the best possible performance for the project, its needs, and its requirements.