FIRST Participants Show What an Open, Creative Mindset Can Achieve

END_OF_DOCUMENT_TOKEN_TO_BE_REPLACED

FIRST Participants Show What an Open, Creative Mindset Can Achieve

This post is authored by Steven W. Pflantz, president of ISA 2017.

In my post last month, I placed the spotlight on the 2017 FIRST® Championship, an international STEM competition held in late April for students ages 6 to 18.

The featured event of this annual competition is the FIRST Robotics Competition (FRC). With limited resources (a standard kit of parts) and under an intense six-week time frame, high school-aged FRC teams design, build and program industrial-size robots to perform rigorous tasks against like-minded competitors. 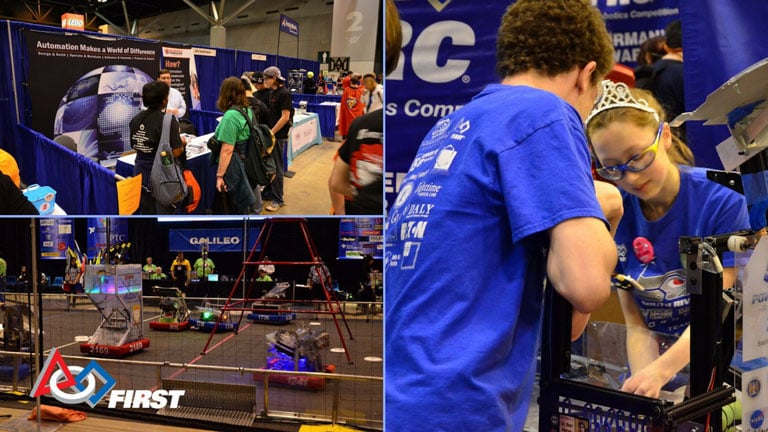 If you haven’t yet attended an FRC, you should go. You’ll come away, as I do each year, energized and inspired—both by what these young people achieve and how they achieve it. Amid demanding rules and conditions, each team approaches each task with enthusiasm, ingenuity and a positive, collaborative spirit.

All of us—ISA leaders and members as well as ISA staff—can learn a lot from these bright, extremely motivated young people. In fact, to attain long-term success, I believe we must. Our future as an association depends on thinking out of the box, working together, and developing creative new solutions to the dilemmas that confront us.

Again, take a cue from FIRST competitors. They’re not daunted by the obstacles before them, and they’re not held back by convention or traditional ways of doing things. Everything is a blank slate. They consider all possibilities and explore them with vigor and ambition.  If one idea doesn’t work, the team turns to another, then another until eventually… hard work, resourcefulness, imagination and initiative pave the way to invention.

Too often, ISA is weighed down by obsolete notions and practices and resistance to change.  We need to transition to a more open and creative mindset, one that encourages and celebrates new perspectives and approaches. By doing so, we’ll become a more nimble and forward-thinking organization—better able to communicate and connect with our key stakeholders and deliver solutions that address their critical needs and expectations.

We’ve got the talent, experience and smarts, but unless we break free of our old ways and behaviors, we’re not going to be positioned to fully capitalize on them.

Steven W. Pflantz, PE, is an associate in the St. Louis, Mo. office of CRB Consulting Engineers, Inc., a global consulting, design and construction services firm. He serves as a technical leader on many of CRB’s electrical and automation design projects, applying his extensive electrical engineering experience — particularly in the areas of instrumentation and controls. A longtime ISA member and leader, Steven brings to his role as Society president a deep understanding of the automation profession, the needs and expectations of ISA members, and the value and significance of automation careers. In 2012 and 2013, he served as vice president of ISA’s Professional Development Department. He’s also served on ISA’s Executive Board (2008 and 2012) and as an ISA district vice president (2007 and 2008). In 2012, Steven was inducted into the Academy of Electrical and Computer Engineering at the Missouri University of Science and Technology. He’s also a member of the International Society of Pharmaceutical Engineering (ISPE). He earned a bachelor of science degree in electrical engineering from the Missouri University of Science and Technology.
Connect with Steven:

A version of this article also has been published at ISA Insights.