END_OF_DOCUMENT_TOKEN_TO_BE_REPLACED

This post is authored by Terrence G. Ives, President of ISA 2013.

If recent events in St. Louis, Mo., are any indication of the future of automation, then prospects are indeed bright. 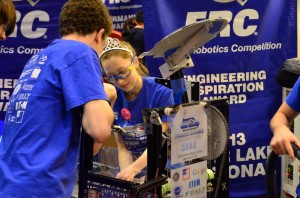 During the FIRST Robotics Competition, high school students worked in teams to design, build, program, test and fine tune their robots to meet the challenges of competition.

More than 10,000 students from around the globe, from ages 6 to 18, gathered April 24-27 at the Edward Jones Dome to put their engineering skills and scientific know-how to the test at the annual FIRST® (For Inspiration and Recognition of Science and Technology) Championship. This year’s event, which included three different age-specific, team-oriented programs, drew nearly 650 student teams from 37 countries around the world, and attracted more than 2,800 mentors, coaches and adult supporters, and over 750 event volunteers.

One of the highlights of the three-day event was the FIRST Robotics Competition (FRC), which combined the excitement of sport with the rigors of designing and building robots. The competition provides students, from grades 9 through 12, with the opportunity to use sophisticated software and hardware, learn from professional engineers, collaborate, earn recognition, and qualify for millions of dollars in college scholarships. This year, more than 2,500 teams in 17 countries participated in 77 FRC regional and district competitions.

As Strategic Alliance Partners of FIRST, ISA and the Automation Federation are immensely excited to take part in and support such a dynamic educational program that inspires young people’s interest and participation in science and technology.

Robotics teams tried to instruct their robots to score as many flying discs into their goals as possible during two-minute and 15-second matches. Matches ended with robots attempting to climb up pyramids located near the middle of the field.

I’m gratified that both ISA and the Automation Federation were well-represented at the event. ISA staff participated in an informational exhibit of FIRST partners, distributing information and talking to students and their parents about the automation profession and careers in the automation field. Also attending were Bob Lindeman, Automation Federation Chairman; Steve Pflantz, vice president of ISA’s Professional Development Department; and ISA’s St. Louis members Nick Erickson, Mike Unterreiner, Keith Thomas, and Brian Nixon.

Upon returning from the event, Bob Lindeman remarked that he found the students’ energy, dedication and creativity awe inspiring:

“I must say I wasn’t prepared for the high level of enthusiasm displayed by these students. It was truly eye opening to witness these young people, from elementary grades through high school, so motivated to learn and apply engineering skills. There is no limit to where the future will take us, and no boundary to where these students will lead us. It’s an honor for ISA and the Automation Federation to be a part of this process. I encourage all of our members to get involved locally and contribute.  I guarantee you will be reinvigorated.”

Steve Pflantz was equally as effusive: “This event continues to amaze me each and every time I attend. The positive energy from all these kids having fun, being challenged and competing in this way is uplifting and awe inspiring. This is a remarkable and talented group of kids, and a lot of them are potential future automation professionals.

“FIRST also provides the real learning experiences and skills development that young technical professionals will need. From budgeting and scheduling to meeting deadlines and working together, these students are required to meet very realistic project scenarios that even seasoned professionals would find challenging.”

While this year’s FIRST competition has ended, I hope that it serves as the beginning of a new wave of ISA member participation and volunteerism in upcoming FIRST programs and events. 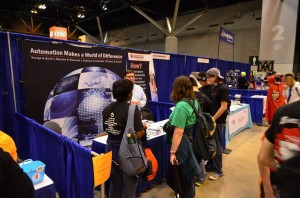 ISA and the Automation Federation hosted an informational exhibit where students involved in FIRST learned about the automation profession and how to plan for careers in the field.

If you haven’t been on hand at a FIRST event, you are missing out on a celebration of youthful discovery, innovation and teamwork that will fill you with optimism regarding the outlook of our automation and control profession. Your involvement in FIRST will help support these bright, enthusiastic young people as they learn, grow and position themselves for success in their lives and careers. After all, some of these students may well design the ground-breaking technologies of the future.

Whether you have just four hours to spare on a weekend or want to serve as a mentor for a given student, there is a volunteer role for you with FIRST. You’ll join other like-minded professionals – more than 120,000 annually – to experience a special camaraderie and personal satisfaction and joy that come when you take part in something truly meaningful.

Terrence G. Ives is the third-generation president and owner of Ives Equipment Corporation in King of Prussia, Pennsylvania, a process control manufacturing representative and stocking distributor. Terry has been actively involved in ISA leadership for many years. He has held numerous positions at the local and Society level including Society Treasurer, Executive Board Parliamentarian, Finance Committee Chair, Investment Committee Chair, District 2 Vice President, and Philadelphia Section President and Exhibit Chairman. He received a bachelor of science degree in industrial systems engineering from Ohio University.