END_OF_DOCUMENT_TOKEN_TO_BE_REPLACED

This post is authored by Peggie Koon, president of ISA 2014.

If you look at any of the reports on energy or happen to browse the Energy Information Administration’s (EIA) website (www.eia.gov), you will see a large number of links to articles about the rapid growth of shale gas and tight oil. In fact, 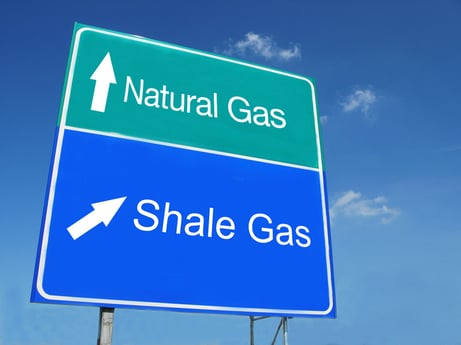 President Obama, in his State of the Union address, talked “about the role shale gas can play in providing clean, reasonably-priced domestic energy.” But shale gas is not just a game changer for the US; globally, the rapid growth of shale gas production has tremendous implications for energy production and consumption.

At the ISA Executive Summit held in Greensboro, NC earlier this year, Society leaders identified the growing global demand for energy as one of 10 game changing trend rivers impacting the future of the automation industry and ISA. We also recognized the rapid growth of shale gas, its impact on the cost and consumption of natural gas, and the potential shale gas opportunity for ISA.

In this article we will review basic shale gas concepts, take a look at the global opportunity, touch briefly on new technologies being used, and look at environmental impacts. Finally, we’ll pose a few questions: How might ISA engage with this industry/market? Are there potential training and/or workforce development opportunities for ISA related to shale gas or other unconventional energy resources? What else might ISA do?

What is shale gas? According to the Energy Information Administration or EIA, shale gas is natural gas (primarily methane) which is trapped inside formations of shale. Shales are fine grained sedimentary rocks that may be rich sources of natural gas and petroleum. (http://energy.gov/articles/producing-natural-gas-shale)

How were these formations formed? Geologists believe that during the Devonian period of Earth’s history (300-400 million years ago) shale formations were formed…“Shales were deposited as fine silt and clay particles at the bottom of relatively enclosed bodies of water.” Around the same time forests were being formed on land from primitive plants and the first amphibians appeared. “Some of the methane that formed from the organic matter buried with the sediments escaped into sandy rock layers adjacent to the shales, forming conventional accumulations of natural gas which are relatively easy to extract. But some of it remained locked in the tight, low permeability shale layers, becoming shale gas.” (http://www.energy.gov/sites/prod/files/2013/04/f0/what_is_shale_gas.pdf)

The combination of hydraulic fracking and horizontal drilling has transformed organic-rich shales that were previously unproductive into some of the largest, most productive natural gas fields in the world. “The Marcellus Shale, Utica Shale, Barnett Shale, Eagle Ford Shale and Bakken Formation are examples of previously unproductive rock units that have been converted into fantastic gas or oil fields by hydraulic fracturing.” www.eia.gov

What shale gas resources are available globally? Advanced Resources International, Inc. (ARI) was commissioned by the Energy Information Administration (EIA) to complete an initial assessment of international shale gas resources. The report looked at almost 70 shale gas formations in 48 basins located in 32 countries and showed reserves of 6,622 trillion cubic feet of technically recoverable shale gas in the 32 countries analyzed. The map below shows the location of these basins and the regions analyzed in the study. For the full report, go to: http://geology.com/energy/world-shale-gas/. 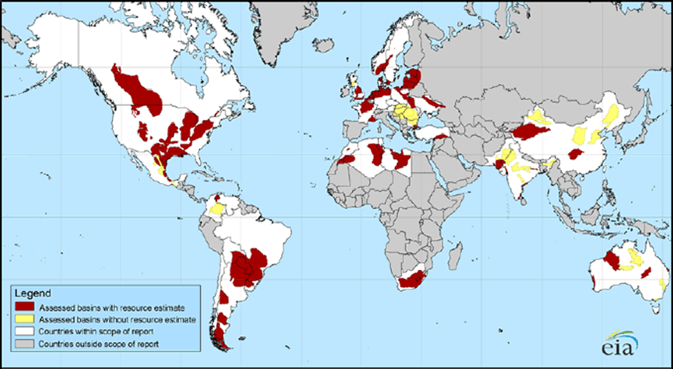 Why is this important? Why should you care? Here’s a fast fact to remember: According to the EIA, just 1 trillion cubic feet of natural gas is enough to heat 15 million homes for one year, generate 100 billion kilowatt hours of electricity, or fuel 12 million natural-gas-fired vehicles for one year.

And by 2035, the EIA projects that shale gas production will rise to 13.6 trillion cubic feet, representing nearly half of all US natural gas production. (www.eia.gov)

In April of this year, I attended the NAE-AAES Convocation of Professional Engineering Societies in Washington, DC. In his presentation, Dr. Jeff Spath, 2014 SPE president, Schlumberger Limited, talked about new technological advances for unconventional energy resources, including:

Another hot topic of discussion was the potential use of liquid CO2 to replace water in the fracking process. Mr. C. Michael Ming, P.E., general manager, Oil & Gas Technology Center, GE Global Research, spoke to us about Unconventional Resources & State of R&D. Michael said we are in “the Age of Gas,” stating that natural gas is taking a larger role in the global energy mix because it’s affordable, reliable, and dispatchable. He talked about the research and development effort that is taking in place in these areas using technologiesthat are better, cheaper, faster, safer, cleaner, and smarter:

Recently, GE, which is studying the issue under a $10 billion research program, stated that “carbon dioxide, used for years to force crude oil out of old wells, likely will not replace water in fracking anytime soon because of technical challenges and limited infrastructure”.

GE is making a push into oilfield technology and is studying how a chilled form of CO2 known as a "super-critical fluid"—which is neither a liquid nor a solid—could be used as the new industry standard for hydraulic fracturing, (or fracking). The company is working on the project with Norwegian oil and gas producer Statoil ASA as part of GE’s ecomagination program, a program that focuses on gas turbine efficiency, wind blade design and other energy projects.

"If we did all the things we are capable of, we would literally astound ourselves” Thomas Edison

What are the implications for ISA? One of ISA’s strategic goals is to look at Big Data, to use analytics so that ISA’s products and services are market driven.

For the US, the EIA’s report “Outlook for U.S. shale oil & gas” projects that:

Read the full report at www.eia.gov.

While I have not researched the implications for each of the 32 countries included in the EIA assessment, ISA might begin by looking at the data to understand how this phenomenal growth in shale gas and tight oil affects the automation industry, not just in the US but around the globe.

Are there opportunities for ISA to provide training, certifications, certificate programs, or standards related to shale gas production, water and wastewater, leak detection and repair, or micro seismic hydrofrack monitoring? Do we have existing products and services that can be applied to shale? Are there opportunities for ISA to develop new standards, products, and services related to shale gas or tight oil? What else might ISA do?

If you are engaged in shale gas and tight oil initiatives and are interested in helping to investigate the shale gas opportunity for ISA, please let Society leadership know. Contact me at president@isa.org.

Peggie Koon, Ph.D., is vice president of audience at Chronicle Media and The Augusta Chronicle, which are part of Morris Publishing Group, LLC, a privately held media company based in Augusta, Ga. Prior to joining Morris, Peggie spent more than 25 years developing IT systems for process automation and process con–trol in a variety of industries, including automotive, nuclear defense, aerospace, nuclear reprocessing, thermal ceramics and textiles. Peggie assumed her first ISA leadership position in 1996 as membership chair of the Management Division and has held a variety of prominent leadership roles in the Society. She earned a bachelor's degree in mathematics from Smith College in Northampton, Mass. and completed graduate studies in industrial and systems engineering at the Georgia Institute of Technology. She received a doctorate in management information systems from Kennedy Western University in Cheyenne, Wyo.
Connect with Peggie:

A version of this article also has been published in ISA Insights.