END_OF_DOCUMENT_TOKEN_TO_BE_REPLACED

This guest blog post is part of a series written by Edward J. Farmer, PE, ISA Fellow and author of the new ISA book Detecting Leaks in Pipelines.

It was a long, long time ago, the early 1980s as I recall. I can still remember my huge smile when I was selected to consult for a consortium led by Chevron Corporation to develop a new project off the California coast in the Santa Barbara Channel. Considering the political obstacles following leakage from a previous subsea blowout, and a pervasive anti-oil attitude it was a risky project in a lot of ways.

It was also technically challenging. This crude oil had a substantial gas component and the liquid came up with a tremendous amount of brine in it. There were issues with the state of the fluid at the wellhead pressure, in the riser as it rose from the wellhead to the processing platforms, and in the pipelines, which began on the outer continental shelf and rose to an on-land processing and trans-shipment facility.

An early block of work involved developing a way to accurately measure the amount of oil in the flowing stream at custody transfer points – crude oil had economic value, but the oil-contaminated brine was a significant liability. I worked with a Chevron team that did the research and analysis that produced the measurement methodology.

From that work I published an ISA book and software package called Advanced Methods in Crude Oil Volume Correction. The U.S. Department of Transportation Minerals Management Service had primary regulatory jurisdiction for much of the project and imposed new regulations for, among other things, automatic leak detection. That resulted in another project for me, which ultimately resulted in the development of a very successful leak detection product.

I have many fond memories of those times, the work, and especially the very fine people. The project manager was a wonderful and accomplished Chevron fellow named Dave Hylton, a dynamic leader who went on to become the chief engineer of Chevron Pipeline Company. It was my first project with a budget over $2 billion, a sobering thought in those days. 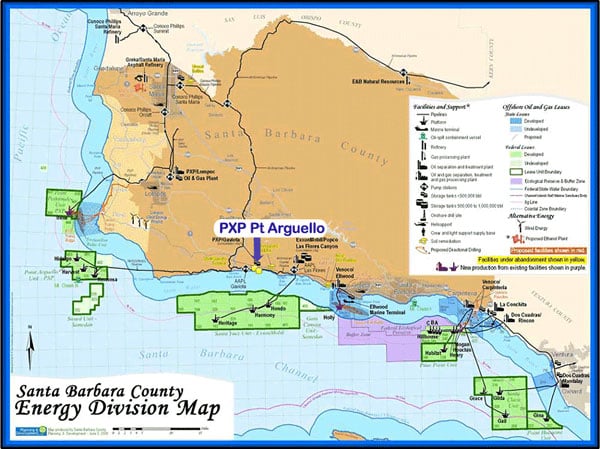 Over three decades later, here is the result: years of safe operation, lots of now-tested, then-new ideas, and a starting point for the next vision. Source: City of Santa Barbara Planning & Development Department

My mind was drawn to those days as I sorted some old files, and I was reminded of my feelings on the morning the platform and pipeline design began. As I drove to the project office that morning there were no drawings, specifications, criteria, or standard practices pertinent to much of what we were about to do. We had our research and analysis of the oil and an understanding of offshore conditions but even that wasn’t in an engineering document that fit into our familiar design practice.

I walked into the conference room and noticed a large, completely blank white board at the front of the room. In short order and without much introduction Hylton stepped up and began describing what we were about to begin. In those days I carried a small camera in my briefcase and it suddenly occurred to me this was a seminal moment – the ostensible beginning of the design of what had grown to a multi-partner $2.5 billion venture.

If you would like more information on how to purchase Detecting Leaks in Pipelines, click this link.

The picture below is the first “engineering drawing” of the Point Arguello Project in its original form. The next morning there were prints of ink-on-velum drawings of these whiteboard creations. Over months they would expand to include all the details necessary to understand and build the project – details of huge issues, such as manifold arrangements, and crucial methodology for accurately measuring flows over the expected range of operating conditions.

It all began a few moments before this picture, at the Pt. Arguello Project Office in Concord, CA with an empty whiteboard and a box of colored pens.

Hours of thought and pages of calculations would support seemingly tiny details. Going to a meeting would involve carrying a role of drawings or a bundle of reduced-size prints. There would be animated discussion of the information on these drawings and lots of note taking on them that would result in even more intense and detailed discussions as the project moved along. Over a few months the project became sets of drawings of the various facilities and the special features, all spawned from that white board on that amazing morning in the conference room.

By the time we were finished, those lines on the whiteboard had become three off-shore platforms, two pipelines, an on-shore treating facility, and a trans-shipment plant. They had also spawned a very sophisticated (for its day) SCADA system with hot-standby, automatic fail-over capability. It supported the first pipeline leak detection system to meet the new regulations, incorporating three independent methods of detecting leaks within minutes of occurrence anywhere on the pipeline. We had accurate and automatic custody transfer instrumentation and a state-of-the-art control room.

A lot of insight and work goes into these projects and a lot of amazing things come out. It begins, though, with a dream forming a vision; followed by an idea; the development of opportunities, constraints, and concepts; a tremendous amount of knowledge and effort involved in figuring out how to build it; and ultimately a real manifestation of the dream. Along the path and into the future there may be good days and bad days – there were both over the history of this project; BUT the feelings it produces and the results we get to see certainly remind us why we like engineering.