END_OF_DOCUMENT_TOKEN_TO_BE_REPLACED

Energy-based maintenance is a type of condition-based maintenance that monitors the performance of equipment during normal operation with the use of energy measurement. The measured energy is compared with a calculated standard to determine the deviation, which is a trigger point for maintenance action. While some other maintenance strategies such as preventive maintenance allows for scheduling of maintenance even when the equipment is still in good condition, this energy approach allows the equipment to operate for an extended period while the energy consumption is being monitored continuously. A deviation from the standard indicates a symptom of imminent fault. With this information, the maintenance team can identify defect(s) and fix them before they result in failure.

Furthermore, executing preventive maintenance when the equipment is still in good condition allows resources such as labor cost and spare parts to be wasted when they could have been more deployed at the point when the condition is about to deviate from baseline. The analogy of energy-based maintenance is shown below. The curve shows that as a failure starts manifesting at point E, the energy consumption deviates due to changes in condition such as pressure, temperature, and friction among others. If action is taken, then the equipment does not progress to point P, where it begins to deteriorate. Point F is the failure point if no action is taken. 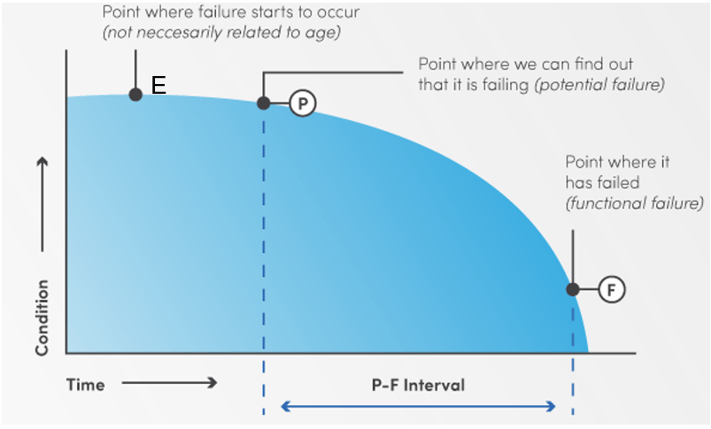 Why Should We Use Energy as a Condition?

Industrial equipment gets energy from various sources, which are then used to do work such as drive a load. The equipment consumes energy in the process, and the energy consumed is a function of load being handled by each equipment. For example, an industrial pump shown below is meant to transfer fluid from one vessel to another and will consume a certain amount of energy E over time T of operation. This energy is more if the quantity of fluid increases, and vice versa.

The fluid being moved by the pump is referred to as the load. The energy required to overcome this load is expected to be constant within a certain range provided other conditions of the pump are constant. This is the energy band.

If, however, there is a change in these other conditions or on the load, there will be a change in energy band of the pump being driven by the pump. This change signifies a problem within the pump system, which, when addressed, will prevent a failure of the equipment.

Advantages of Energy Based Maintenance

The figure below illustrates the concept explained above. 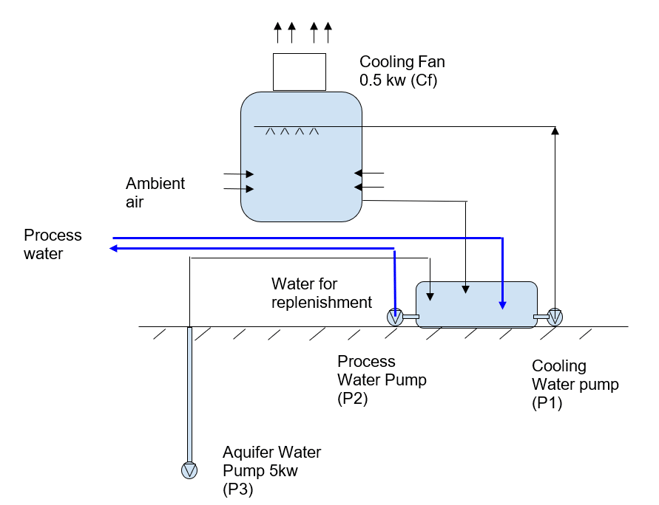 This figure is a cooling system used in an industrial plant, often referred to as the cooling tower system.

Process water (the blue line) at high temperature is received into a reservoir which is then transferred with a pump (P1) to a cooling tower, which has an extractor fan that moves air through from the lower side of it upwards. The water is atomized so that an extractor fan (Cf) can pass air through the fine droplets of water. The contact between ambient air and the water droplet creates the needed cooling. The principle of cooling is with an air heat exchanger. The cooled water returns to the reservoir and is returned to the process plant with a pump (P2). Some water is lost to the environment and it is replenished with an aquifer water pump (P3).

How To Perform an Energy-Based Maintenance

To do an energy-based predictive maintenance on the four pieces of equipment (P1, P2, P3 and Cf), an energy meter will be installed for each of these equipment, and data in the following table will be entered into a computerized maintenance management software that is linked with the energy meter via Internet of Things (IoT).

The required energy can obtain as follows: 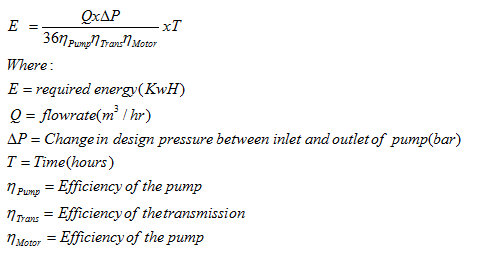 For the actual energy consumed, an energy meter can be used for the measurement. However, in the absence of such energy meter, the data can also be determined by the relation below:

For a motor driven pump as in our case study, the electric current and voltage can be used to calculate the load as shown below:

With a computerized maintenance management system (CMMS) and IoT enabled devices, a deviation of energy consumed should trigger a work order for inspection. Then, the equipment is checked to identify which points above were the cause of the change. Correcting the reason for the anomaly will prevent the breakdown of equipment.

Abiodun Abiola works as a Maintenance Manager with Etex Group which is a company specialized in fiber-cement building solutions. He has over 10 years experience in Industrial Engineering, Energy Management, and Maintenance strategies.