What are the Cost Benefits of Industrial Wireless?

END_OF_DOCUMENT_TOKEN_TO_BE_REPLACED

What are the Cost Benefits of Industrial Wireless?

This blog post was written by Jay Werb, technical director of the ISA100 Wireless Compliance Institute.

Industrial wireless instrumentation is rapidly becoming the technology of choice for a growing class of applications. A wireless deployment saves significant costs compared to an equivalent wired installation, resulting in savings of 20 to 30 percent in simple configurations. Cost reductions can be even more compelling in scaled installations or in remote locations. Where wiring is cost prohibitive or infeasible, wireless enables best-practice instrumentation wherever it is needed for efficient and safe industrial operation. 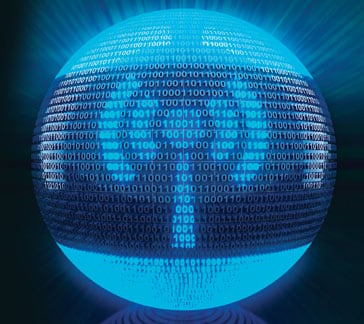 The cost advantages of wireless instrumentation improve with scale. In a wired system, the cost of each additional instrument requires extra wiring and the associated labor, equipment, and maintenance. A wireless system, if designed for scalability, can accommodate additional devices with the same infrastructure and no additional wiring. For the first time, applications with hundreds or thousands of measurement points can be reasonably contemplated.

Until fairly recently, most users and experts viewed wireless instruments as intrinsically inferior to their wired counterparts, with wired instrumentation always being preferred when feasible. As experience with wireless technology grows, this attitude is shifting, with wireless becoming the default user selection for well-proven applications. Today, major users require cost justification for wired instrumentation in applications where wireless has been demonstrated to exceed user requirements.

In Clayton Christensen’s model of innovation, adapted in figure 1, low-cost products initially take a beachhead position with simple applications at the lower end of a market. From that starting point, they work their way up-market. A tipping point occurs when mainstream users discover that the low-cost products can be used in high-end applications. Today, most major users are in the “mainstream adoption” zone, which is shown as an oval to indicate that adoption rates vary from user to user. 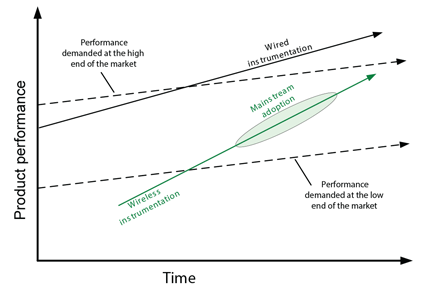 Table 1 summarizes the main differences between wired and wireless instrumentation. Some of the listed characteristics, such as fading and interference, relate to radio considerations. Other characteristics, such as battery replacement, relate to energy constraints when wireless instrumentation operates in locations without power. 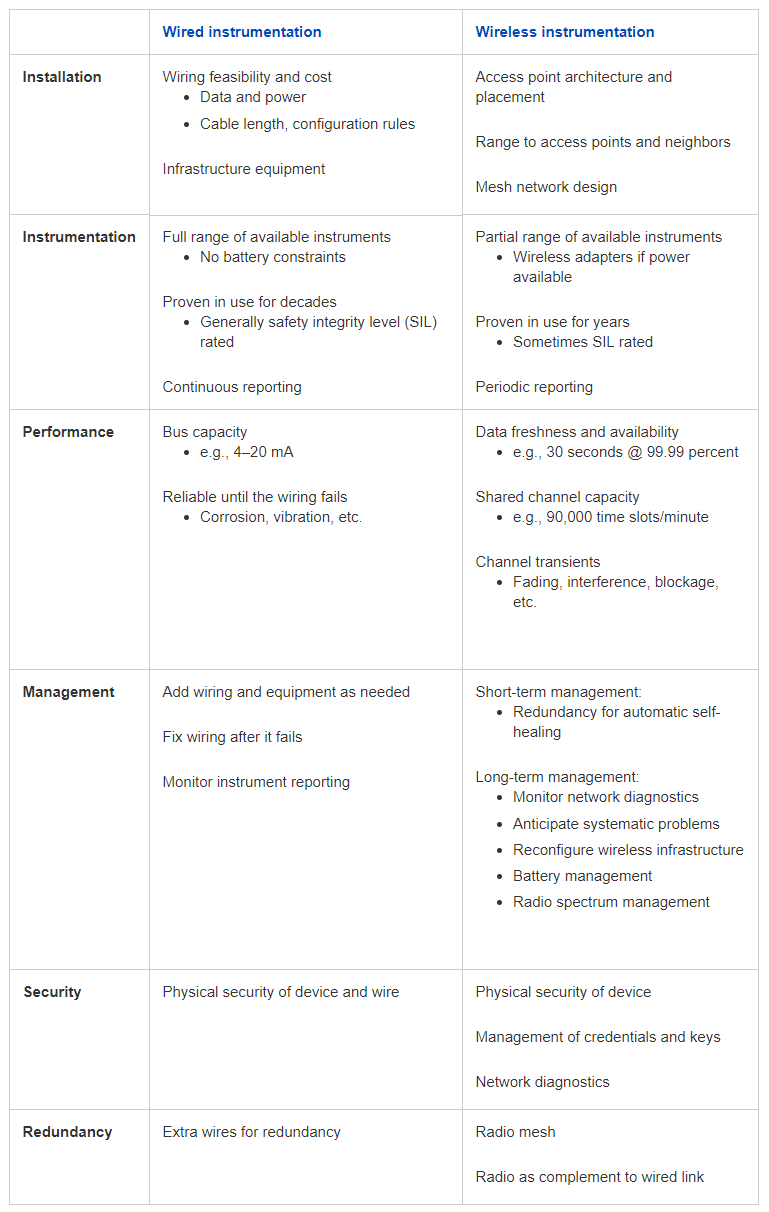 Major advantages of wireless instrumentation include:

Disadvantages of battery-powered operation include:

Disadvantages of radio operation include:

Based on real-world experience with all of these factors, users of industrial wireless are learning that wireless can deliver more than adequate performance for a wide range of applications.

Use cases for industrial wireless instrumentation

Industrial wireless instrumentation is being applied to a wide variety of applications today. Figure 2 represents one way to summarize the major application use cases. 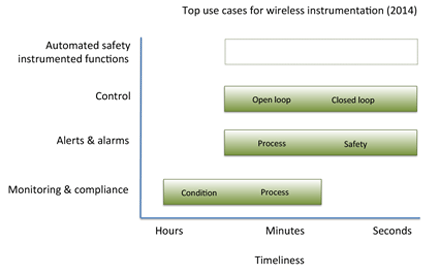 Alerts and alarms merit special mention due to safety considerations. Alarming involves an out-of-bounds condition that is reported to a user or system. Yokogawa Electronics Corporation has reported that more than 50 percent of its wireless instrumentation projects require a 1–10 second update period. Cited applications include gas detection, fire detection, monitoring for operation (power), monitoring for safety (steel), cold temperature monitoring (gas), and tsunami detection. All of these can be considered “alarming” applications.

According to ANSI/ISA-18.2-2009, an alarm is “an audible and/or visible means of indicating to the operator an equipment malfunction, process deviation, or abnormal condition requiring a response.” The essential element of this definition is the response to the alarm.

The term alert is generally used for applications with less rigorous requirements than alarms, for example maintenance alerts where the user response is not specific or time critical.

A “safety-related alarm” designation can be applied to an alarming application that is a candidate for safety credit as an IPL. To simplify approvals, less than 0.9 availability may be claimed, thereby classifying an alarm as a basic process control system. Regardless of an alarm’s classification, high reliability is invariably a key objective.

It is well established that an alarm system must be designed to effectively handle individual alarms during normal operation and handle many alarms during a major plant upset. Wireless has the potential to support many more alarms than has been feasible in the past, so alarm management is an essential consideration in a scaled wireless implementation.

Gas sensing is an important use case for wireless alarming. The requirements vary by application and region. For example, the process safety time of response (t90) for hydrocarbon gas detection as required in IEC60079-29-1 is 60 seconds. In Japan, the time to alarm must be within 30 seconds for a specified concentration.

ISA100 Wireless and the Internet of Things

ISA100 Wireless was designed as an extension of the Internet, building on the IPv6 “Internet of Things” standard. IPv6 is an addressing scheme that allows an essentially unlimited number of devices to be individually addressable. Collections of devices can still be segregated as needed for security and manageability, but with IPv6, addressing considerations are no longer a constraint. Most forecasts suggest that tens of billions of devices will be Internet accessible within a decade. With its use of IPv6, ISA100 Wireless is well positioned to ride that wave. 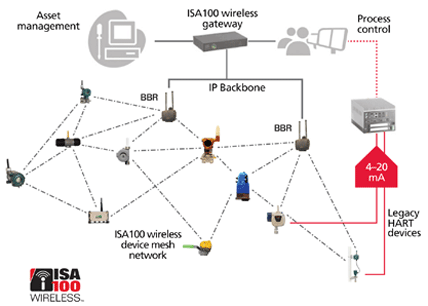 The Internet of Things approach in ISA100 Wireless affects network architecture and the user experience in actual practice.

Figure 4 shows a structured network design that leverages IP. The ISA100 Wireless network is shown as a single cloud or mesh with multiple IP backbone connections. In this configuration, multiple gateways are shown as Internet appliances without a radio. ISA100 Wireless messages flow over the IP network. Networks of this kind are generally rolled out using a structured methodology, similar to the way a Wi-Fi or cellular network is typically deployed.

Industrial wireless instrumentation is now at a stage where major users are rolling out ISA100 Wireless programs. The “tipping point” for industrial wireless occurs when major users switch from an ad hoc approach to wireless campaigns. In a bottom-up ad hoc approach, small wireless systems are installed one by one to address specific problems, relying on the passion of proactive early adopters. In a top-down campaign, solutions are rolled out to support enterprise strategy. A good process allows for both approaches, with successful ad hoc systems being a laboratory for future wireless campaigns.

Industrial wireless instrumentation is widely considered suitable for monitoring, control, and alarms, including safety alarms. Systems may be deployed using an ad hoc methodology to get started, but users are better served when systems are scaled using a more structured methodology that leverages the Internet of Things. User acceptance of and demand for IP-based scaled mission-critical wireless technology is driving adoption of ISA100 Wireless. ISA100 Wireless is poised to support a fast growth curve with its open design, scalable system and product architectures, and vendor-neutral ecosystem. 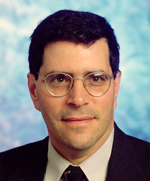 Jay Werb is the technical director of the ISA100 Wireless Compliance Institute (WCI), where he manages the organization’s compliance and other technical programs. He is also the editor and author of the data link layer (mesh) section of the ISA100.11a standard. Werb has more than 30 years of experience in the computer field, with the past 20 years focused on wireless. He has been the technical founder of multiple technology companies and holds more than a dozen patents. In addition to his work with WCI, Werb is a consultant with AIW LLC, where he assists end users with strategic adoption of industrial wireless instrumentation. He has a B.S. in biology and a master’s degree in management, both from the Massachusetts Institute of Technology.