END_OF_DOCUMENT_TOKEN_TO_BE_REPLACED

What is a Pneumatic Valve?

The primary function of a pneumatic valve, also known as a directional control valve, is to switch airflow. These valves can keep the pressure constant. There are numerous pneumatic valve categories and a wide range of pneumatic valves. Pneumatic valves are classified based on their style, type, design principle, operation type, function, size, and application. 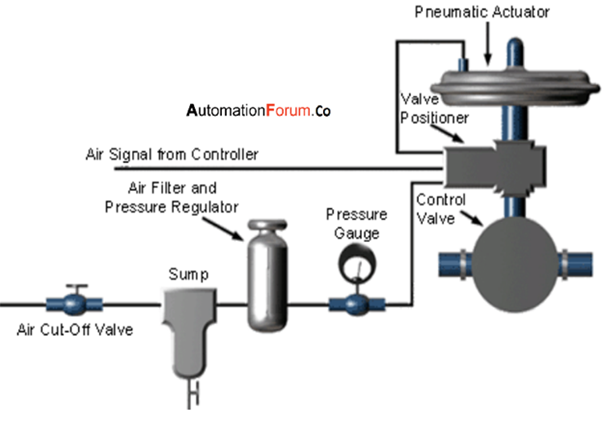 What is the Operation of a Pneumatic Control Valve?

Pneumatic control valves can reduce pressure in a controlled manner by using actuators and positioners that are controlled by a controller. Controllers can detect pressure fluctuations and adjust the air supply signal to the pneumatic positioner. A pneumatic positioner would supply air to the diaphragm, allowing a valve to be opened. Springs are used as an opposing force, causing the valves to close when the air pressure applied to the diaphragm is lost or reduced. Many industries rely on pneumatic control valves.

Pneumatic valves, also known as directional control valves, can be configured in a variety of ways, including:

Functional directional control valves, which control the direction of airflow or prevent it entirely, are a large class of pneumatic valves with numerous variants. These devices can be used in a hydraulic system to connect or disconnect the system's main compressed air supply or to advance or retract air cylinders that move as part of the machine or process for which the pneumatic system was designed.

The following are the primary types of pneumatic valves:

Two ports are connected by a passage that can be opened or closed to control the flow through the valve. An electrically activated solenoid typically shifts the valve spool or poppet to direct flow. Many systems use the valve's simple on-off function to interlock, isolate, and connect various system parts.

Three-way and two-way valves are made up of three ports that are connected by passages within the valve body. To control a single-acting cylinder or pilot another valve, the valves pressurize and exhaust one outlet port.

Three-way valves direct pressurized air to the cylinder's cap-end side. Shifting the spool to the opposite extreme prevents flow and pressure from reaching the actuator. Since the actuator is connected to the exhaust passage, gravity or spring force must return the rod to its original position. Three-way valves can also be used in pairs to control a double-acting cylinder, effectively replacing a four-way valve. When high cylinder speeds are required, consider using paired three-way valves instead of a four-way valve.

The close coupling of three-way valves to the cylinder ports reduces cylinder backpressure and pressure drop in the lines, allowing for higher cylinder speeds. In high cyclic applications or when intermediate positions are required, the valves are also used to save compressed air.

Two-position, four-way valves typically have four or five ports and two or three positions. In each position, a two-position valve has two distinct flow paths for actuating and reversing cylinders, rotary actuators, or bidirectional motors. At the same time, the spool directs flow from the pressure port and the other actuator port exhausts to the atmosphere.

The four-way valve in the five-port version of the two-position has five individual ports that provide various valve configurations, such as two different exhaust or pressure ports. For example, in the latter case, the valve may deliver high pressure to actuate a cylinder and provide high clamping force, but lower pressure (from a regulator) to release the clamp. Lowering the pressure saves energy.

Five-port versions of four-way, three-position valves are also available. The most common center conditions for these valves are “all ports blocked” and “exhaust center.” The two extreme positions that control actuator movement are the power positions of the four-port, four-way valve. The center position is intended to meet some system requirements, such as locking or letting an actuator float.

The way airflow direction is switched is referred to as this type of pneumatic valve classification. A two-way directional valve, for example, is either open (airflow is enabled) or closed. An actuator moves a valve spool into position to allow each port to be open or closed. A spring is used to release the valve spool and return the pneumatic valve to its original position. A spring offset valve is a two-way directional valve that operates in this manner.

Types of Pneumatic Valves Based on Actuators

The pneumatic valves can be classified according to the type of actuators they use. They can be equipped with electromagnetic, air-powered, or mechanical actuators.

Solenoid valves respond to an electric signal by opening and closing. They regulate airflow in a pneumatic system and liquid flow in a hydraulic system. A valve with a spool or a poppet arrangement is available.

Solenoid valves are commonly used in manufacturing environments. The reason for this is that the valve requires a consistent temperature to function properly. If you want it to work in a constantly changing environment, the valve must be able to handle temperature extremes without shorting out.

A good example of the latter is in a car, where it is used to start the ignition. When you turn the key, an electric signal is sent to the valve, causing it to open and the engine to start. The valve must handle the release of heat from the engine as well as any cold from inclement weather.

When it comes to how solenoid valves are used with fluids, other applications include irrigation systems and dishwashers. They regulate the flow of water so that fields can be watered on a regular basis, or your cups and plates can be cleaned. The versatility and durability of these models are highly valued.

From the standpoint of design, air-operated valves are like solenoids. They do not respond to an electric signal, but rather to air pressure by applying force to a piston or diaphragm. Air-operated valves are found in environments that require a high output, but one that does not rely on electricity and instead is used remotely. As a result, they are used in chemical plants and fertilizer manufacturing facilities. Chemicals, when exposed to the wrong substances, can cause combustion, and endanger their operators. People are kept away from potentially toxic nitrogen compounds in the latter.

Mechanical valves, also known as hand-operated valves, are powered by hand. They may be seen in situations where electricity would be hazardous or impractical for the tasks at hand. They, like solenoid valves, can be used for both air and liquid flow.

Typically, you would move these valves by applying energy to them with your hand or feet. A push-pull motion or simply pressing a button would be required by the operator. Other types of mechanical valves are propelled by lever arms or friction. Mechanical valves must now be larger in size to handle higher flow rates.

A mechanical valve is one that is used to help people with heart disease. They contribute to the flow of blood and oxygen through the human body. While such artificial hearts can cause blood clots, long-lasting models can extend a person's life.

Another example would be a manual valve in an older machine with no electrical connection. Consider how old-fashioned sewing machines and spinning wheels work by the user pressing a pedal and transferring energy in a circular motion. They would employ crude pneumatics.

What is a 3/2 Pneumatic Valve?

A pneumatic valve, also known as a directional control valve, directs or blocks the flow of compressed air or other gases within a system. These valves serve as pilots for other valves and as drivers for other components such as an actuator, gripper, hand tool, or other devices.

A 3/2-way valve has three ports and two settings and can be operated pneumatically, manually, mechanically, or electrically via a solenoid valve. They can be used to, among other things, regulate a single-action cylinder, drive pneumatic actuators, blow-off, pressure release, or be used in vacuum applications.

Pneumatic systems are designed to transmit and control energy using compressed air. Pneumatic systems are found in manufacturing lines, train doors, and mechanical clamps. Many industrial companies would be unable to function without the specialized use of pneumatic control systems. Pneumatics is often the driving force behind automated machines.

Among the advantages of using these devices are:

Jack Illamaran is an instrumentation engineer with 15+ years experience in the oil & gas industry. He is currently working as an Instrumentation Engineer for Infohe Innovations LLP and creates industrial automation-oriented content for automationforum.co.