END_OF_DOCUMENT_TOKEN_TO_BE_REPLACED

These robots are adept at tasks that require adaptability and work well in areas such as packaging and machine tending. Collaborative robots are built to emulate tasks that have traditionally been difficult to automate, and their features and programming are designed to perform tasks as humans do. The “collaborative” in their name refers to their unique ability to work alongside and in tandem with humans. Unlike traditional robots, if a collaborative robot comes into contact with a human, it will immediately stop what it is doing. This advanced sensing technology and safety mechanism ensures that humans can safely work alongside the robot on a production line.

Traditional industrial robots have been critical to the evolution of manufacturing and have helped automate tasks with speed and efficiency. Programmed to do a single task at high volume, they can handle large payloads and efficiently pump out parts quickly. They have been essential for scaling factory operations.

However, traditional robots have also left a significant gap. They take hundreds of hours to program and require an automation engineer or computer scientist to implement them. These machines cannot easily be reprogrammed to a new task, and the costs in both time and money are significant if market demand shifts to a new product. Additionally, many of these traditional machines are dangerous in close proximity to humans, because they handle large weights and are oblivious to the environment around them. To mitigate these risks, traditional robots are typically required to function inside safety cages.

Advanced collaborative robots can sense if they require adjustment, and they reorient themselves accordingly. As a result, the robots can safely deal with variability on the factory floor and perform tasks like humans do. Traditional robots are presented with parts that are uniform and tasks that never change. Therefore, if the robot or a part is bumped out of position, the robot will continue to drive the task until completion, potentially damaging parts, machines, or other robots. This situation can cause a major disruption to the production line and operational schedules. Conversely, if a collaborative robot is bumped out of position, it has the capability of sensing that it is misaligned and will correct itself or pause its task until fixed. 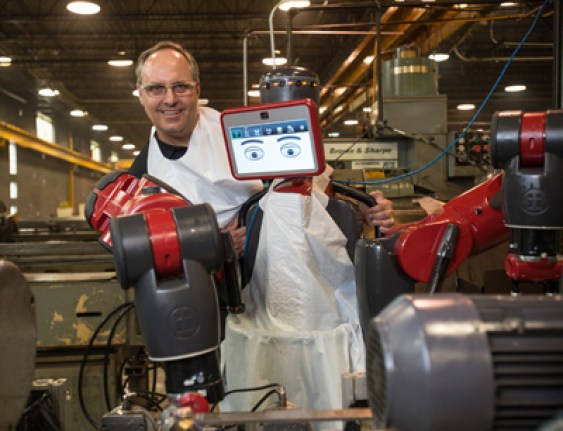 Collaborative robots detect any force or inadvertent contact and immediately stop. This advanced sensing technology and safety mechanism ensures that humans can safely work alongside the robot on a production line.

For manufacturers, one of the most significant advantages of using collaborative robots is the ability to shift quickly and easily between tasks, allowing them to adjust to market demands at a moment’s notice.

Collaborative robots learn a task through training by demonstration. Flexible actuators and advanced sensors built into the robots allow them to be trained by mimicking a human’s movements. By grasping the “wrist” of the robot and showing it how to perform a task, a human can have the robots up and running in minutes, far from the number of weeks it takes to fully implement a traditional robot. And since these robots can be trained by anyone, a product specialist is not required to be on site to alter the programming. This flexibility enables manufacturers to use the robot on multiple lines and easily reprogram it if market demand changes.

The flexibility of collaborative robots is particularly useful in manufacturing environments with a lot of variability, which is becoming increasingly normal in today’s era of consumer-driven personalization and customization. Built to thrive in low-mix, high-volume environments, traditional robots were designed to accomplish one task repeatedly, and thus are stationary and inflexible. They need a workspace built completely around them in an environment that is controlled and unchanging. If there is any variation in their workplace, traditional robots stop working effectively, causing delays not only to the robot’s assigned tasks, but also to the tasks of the specialist who now has to stop and adjust the robot.

Collaborative robots have safety features that eliminate the need for safety caging. They have springs in their joints, called series elastic actuators, that reduce the force of an impact.

Advanced collaborative robots can “feel” their way into fixtures. Their robot positioning system allows them to realign themselves and continue their given task if anything in the environment changes, such as a minor bump of the work station. These robots efficiently switch between tasks such as packaging, machine tending, and circuit-board testing, all of which require vastly different movements.

All about the software

The robotics industry has a long history of focusing on hardware. That paradigm is shifting as collaborative robots focus on software that will drive the next generation of the industry. It is software that allows them to:

The software-first approach to manufacturing technology is shifting the way companies operate. All of these advances are already changing the way manufacturers deploy automation—bringing robots that improve efficiency and productivity to tasks that have been out of the reach of traditional industrial robots.

New type of robots are expanding the market.

IIoT and the factory of the future

As collaborative robots and machines are built with more intelligence, the factory of the future will become a paragon of the convergence of data, machines, and software. Manufacturers will want to leverage the benefits from big data and the Industrial Internet of Things (IIoT) to bring together disparate machines for smoother operations and increased efficiency.

BCG estimates that there will be a 150 percent increase in automated tasks in the next 10 years. As many countries work on initiatives that are driving manufacturing growth, such as Germany’s Industrie 4.0 and Made in China 2025, collaborative robots will be crucial to automate production lines for manufacturers worldwide. Collaborative robots will continue to integrate with more complex artificial intelligence and machine learning, and will work with new technologies like 3D printing to create a factory of the future that will give manufacturers agility in their markets while driving growth on a global scale.

Donnelly Custom Manufacturing, a Minnesota-based company that does injection molding, uses a Baxter robot to keep up with short-run production. Donnelly has integrated it into the manufacturing floor to perform tasks such as removing parts from a conveyer belt and stacking each part on customized stacking devices, as well as counting and packing finished products for shipment to customers. These tasks were previously performed by humans, but because of their time-consuming and repetitive nature, were difficult to fill and were prone to human error.

The robot effectively eliminates errors in this role. Its flexibility and agility help the Donnelly team meet customer needs and expectations, including competitive pricing and custom products. The production lines and product mix shift rapidly every day, but thanks to the robot’s collaborative nature, it can switch tasks easily and adapt to this variability. While the collaborative robot is busy completing these mundane, repetitive tasks, Donnelly’s human workers have been assigned to more cognitive, creative tasks and activities. As robotics software continues to advance, the benefits to using collaborative robots will multiply for all involved.

Popular Blog Posts from the First Half of 2021

This program honors the remarkable achievements and contributions of ISA members. The International Socie...
Steven Aliano Jul 27, 2021 5:30:00 AM

Why CO2 is the Most Promising Refrigerant in the Cooling Industry