How to Choose Wired vs. Wireless for New Industrial Installations

END_OF_DOCUMENT_TOKEN_TO_BE_REPLACED

How to Choose Wired vs. Wireless for New Industrial Installations

This post was authored by Moazzam Shamsi, global director of wireless consulting and execution solutions at Emerson Automation Solutions.

Fieldbus technology has been available for more than 20 years. Initially, FOUNDATION Fieldbus and other digital fieldbus technologies were developed in the 1990s as a replacement for the 4–20 mA standard.

More recently, ISA-100 and WirelessHART were also developed. The International Electrotechnical Commission (IEC) approved WirelessHART in March 2010 as IEC 62591, and ISA-100 was approved in September 2014 as IEC 62734. For the purposes of this article, wireless refers only to wireless sensor systems, and not to other wireless technologies such as 802.11 Wi-Fi. Today, automation professionals in a process plant have a choice to make for new installations: wired or wireless? For plants with existing wired and wireless infrastructure, the choice hinges on a straight comparison of the two technologies and the application of the solution that makes sense. For plants without an existing wireless infrastructure, the cost of installing one must be considered (figure 1). 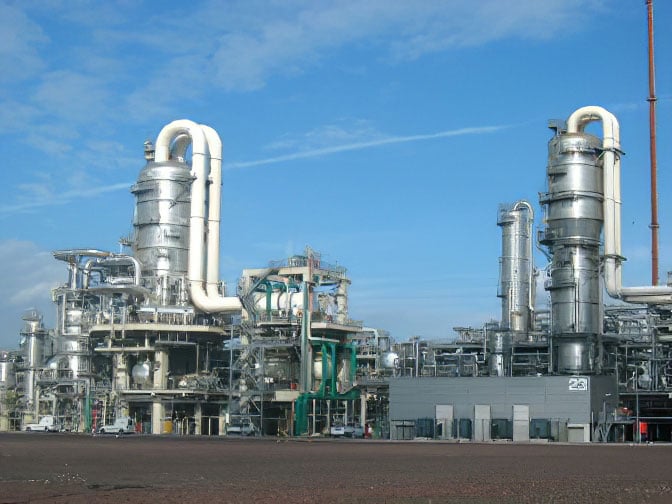 Compared to traditional 4–20 mA wiring, fieldbus technologies save wiring costs, simplify expansion, and are easier to make redundant because they allow multiple instruments to use a single cable called a trunk or segment. A trunk or segment begins at an interface device at the automation system. On a FOUNDATION Fieldbus system, the interface is called an H1 card.

If a problem occurs in any instrument on the segment—such as a short circuit—it can disable the entire segment. Therefore, many plants install a segment protector or device coupler, allowing multiple instruments to connect at one location. The device coupler is installed in an enclosure near the process unit. Connections to the individual instruments are called spurs. A typical segment includes an interface card, a fieldbus power supply, a device coupler, and individual spur cables from the coupler to the instruments (figure 2). With FOUNDATION Fieldbus, the H1 card communicates to the plant’s distributed control system (DCS) via a high-speed Ethernet (HSE) connection. Other fieldbus technologies use similar architectures. For critical process units, a redundant segment can be installed, using duplicate segment cables and power supplies. In hazardous areas, intrinsic safety barriers provide protection. 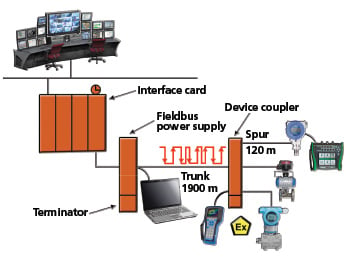 Where do you use Fieldbus?

The ideal application for wired fieldbus is a process unit containing many flow, pressure, temperature, level, multivariable, and other instruments, all within a reasonable distance of each other. The more instruments in a relatively small area, particularly complex multivariable units, the more fieldbus makes sense (figure 3). 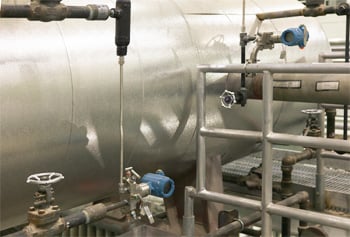 Figure 3. Multivariable transmitters are each sensing temperature and pressure, and transmitting this and other information back to the host control system via FOUNDATION Fieldbus.

By using device couplers and marshalling cabinets strategically located around the unit, wiring from instruments to device couplers can be minimized. Most fieldbus instrument suppliers offer automated design tools, making it easy to design a segment, calculate maximum distances, and determine the wire types. When instruments on a segment are far apart, repeaters allow segment distances up to 300 m. Instrumenting such an application is fairly easy, because multiple vendors make components with various fieldbus interfaces. If a plant wants to modernize its legacy control system and install fieldbus-based instrumentation, HART can use existing 4–20 mA wiring from older instruments to carry digital information to the device couplers. The device couplers can be installed in the old marshalling cabinet, saving a considerable amount in wiring and labor costs.

Although HART does not have performance levels comparable to newer fieldbus technologies, it is the least costly wired digital option, and often sufficient from an operational standpoint. Valve and pump controls are also available with fieldbus, so it is possible to set up local control loops within the fieldbus array operating independently from the DCS. This is accomplished with function blocks allowing, for example, local proportional, integral, derivative (PID) control of a digital valve controller based on signals from a nearby level transmitter. If the DCS or the HSE go down, the control loop will continue to operate.

This makes wired fieldbus suitable when working with loop-powered devices such as two-wire level transmitters with continuous wave modulation, eight-channel process temperature transmitters, tank gauging multispot temperature transmitters, intelligent on/off valves, and field indicators. Wired fieldbus is also suitable for real-time process control. The response speed of a wired system—from the spur to the segment to the H1 to HSE to the DCS and back again to a control component, such as a control valve—can be significantly faster than a wireless system. Because of the cost of the hardware (H1 interface, power supply, cable, etc.), wired fieldbus is not suitable for a few devices located far away from other instrumentation. Such applications are better handled by wireless transmitters, along with other scenarios such as adding instruments to existing plants without installed extra capacity in the wired infrastructure.

WirelessHART is a self-organizing mesh technology in which field devices form robust wireless networks to dynamically mitigate obstacles in the process environment (figure 4). Other wireless technologies employ similar strategies, with varying degrees of effectiveness. Wireless technologies do not require communication wiring and related infrastructure. Some wireless devices require power wiring, but the vast majority of deployments use battery power and thus operate completely without wires. Wireless networks communicate data back to host systems securely and reliably, and can be applied to both control and monitoring applications.

Each wireless field network in a plant has a unique network ID to prevent devices from attempting to join the wrong network. WirelessHART devices can communicate through each other to send messages to the gateway, forming a self-organizing “mesh.” The mesh extends the range of a device beyond that of its own radio. For example, a wireless device may be several hundred feet away from the gateway with obstacles between, but power-efficient “hops” through neighboring devices closer to the gateway ensure a reliable, extended range. The gateway connects to the DCS via a wired or wireless high-speed link, typically Ethernet.

Where do you use wireless?

The chief advantage of wireless systems is that they can be installed virtually anywhere in an efficient, timely, and cost-effective manner. Battery-powered transmitters require no wired infrastructure or local power supply, so they can be far away from a process unit’s wired fieldbus and power wiring. They can also be installed in locations where supplying power and cabling would be too expensive or hazardous.

This flexibility means that there are benefits to using wireless in both greenfield capital projects and existing brownfield facilities.

They also use wireless technology to manage schedule risk and cost escalation/containment and to reduce space requirements and weight. Wireless can reduce schedule and cost impacts because there is always the potential for scope creep and additional I/O as projects progress. The later in the project a change comes, the greater the risk of jeopardizing the project schedule and budget.

Wireless can usually accommodate these changes better than fieldbus. Quite often, additional measurements are eliminated from the design of a new or retrofit project because those signals are deemed too costly to implement during the capital expenditure phase of a project. If those measurements are needed later, adding wired instrumentation can be much more costly than wireless solutions.

On these types of brownfield projects, wireless solutions are a good way of supporting operational excellence programs to improve plant productivity and reliability and compliance to emerging environmental and safety legislation. A plantwide wireless network can be installed with minimal disruption to fixed infrastructure such as wiring, conduits, and cable trays. Adding wiring to these existing assets can be costly, and interfering with aging assets can cause unforeseen issues such as disrupting signal transmission. For example, a major chemical company in Europe implemented a plantwide wireless infrastructure to enable operational expenditure programs.

The first application was an energy project to monitor steam traps. The company installed wireless acoustic transmitters to listen for acoustic signatures and monitor temperature—both vital signs related to steam trap operation (figure 5). The steam trap monitors took only two days to install, and they generated a complete return on investment (ROI) in six weeks through detection and remediation of previously unknown losses. In another application, a global contractor reported that adopting wireless solutions cut commissioning time by 50 percent. It also streamlined the design and engineering process, saving 10 hours per measurement point. Using wireless helped them maintain the project schedule and improved their ability to manage change on the project. 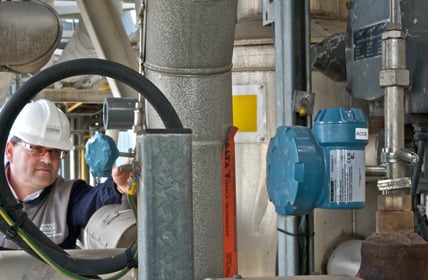 The low-power nature of WirelessHART devices allows them to operate for several years without replacing the battery. Configurable update rates conserve battery life by choosing the most appropriate rate for a particular application, typically within a range of 1 second to 1 hour. Most applications today are “monitoring” and therefore only need infrequent updates. WirelessHART transmitters can in certain circumstances be used in real-time control applications, but this requires higher update rates, in some cases necessitating wired power. Many projects have a very attractive ROI when using wireless that they do not have with wired fieldbus due to its added installation and maintenance costs. In these situations, wireless can quickly deliver an investment payback, with ongoing benefits.

Using fieldbus and wireless together

Some visionaries predict all-wireless plants are coming, but this is not possible yet. Instead, modern automation platforms and connectivity standards are making it easier to use fieldbus and wireless together. Those designing new automation projects should consider using both as complementary technologies in a tactical way to efficiently manage projects and to enable operational excellence programs. Fieldbus and wireless can be used together to manage project risks, such as I/O scope creep, and engineered to meet power, space, and weight design constraints. Ideally, a basis for design should be established early in the project so engineers clearly understand which technology to use in each situation.

Wired fieldbus will continue to be used, because it can perform real-time process control with a DCS and with control-in-field function blocks and provide signals and power to control devices. Wireless control is possible with WirelessHART using PIDPlus algorithms, but it will take time for industry to gain the confidence and experience to apply this technology for real-time control. Wireless will become more popular because it can monitor anything, anywhere. Also, it is more economical than wired fieldbus and can be easily installed in both new and old plants. Industry-leading process plants will install both wired and wireless infrastructure and use whichever is most efficient and effective in each situation.

About the Author
Moazzam Shamsi, M.Sc., B.Eng., C.Eng., MinstMC, has been an automation professional for 25 years, and his career spans a broad range of industries and roles from technical leader to project management. He presently works for Emerson Automation Solutions where he globally directs Emerson's wireless consulting and execution solutions on large capital projects. Moazzam specializes in working with clients and contractors to implement technology solutions for capital and operational efficiency projects.