END_OF_DOCUMENT_TOKEN_TO_BE_REPLACED

This post was authored by Steve Mustard, an industrial control system and cybersecurity consultant, and author of the ISA book Mission Critical Operations Primer, and Mark Davison, is a software engineer with more than 30 years of experience. Currently he is an owner/director of Terzo Digital.

Blockchain is a novel technology that leading industry players predict will cause major disruption to many existing industries, including banking, real estate, supply chain, voting, and energy management.

Large businesses, such as IBM, Samsung, UBS, and Barclays, are already working on blockchain-related projects and services, and hundreds of startup businesses are developing their own killer applications. Blockchain technology could also disrupt the industrial control system (ICS) world, so it is worth looking now to see what might be coming and how it might affect us.

Blockchain technology is a decentralized method for recording transactions. These transactions are recorded in a distributed ledger (known as the blockchain) that is stored across thousands of computers worldwide.

Transactions are recorded in the ledger and grouped together in blocks. They are secured using a form of cryptography called "hashing." Because the ledger is distributed and secured using hashing, it is theoretically impossible to make changes once something is recorded. 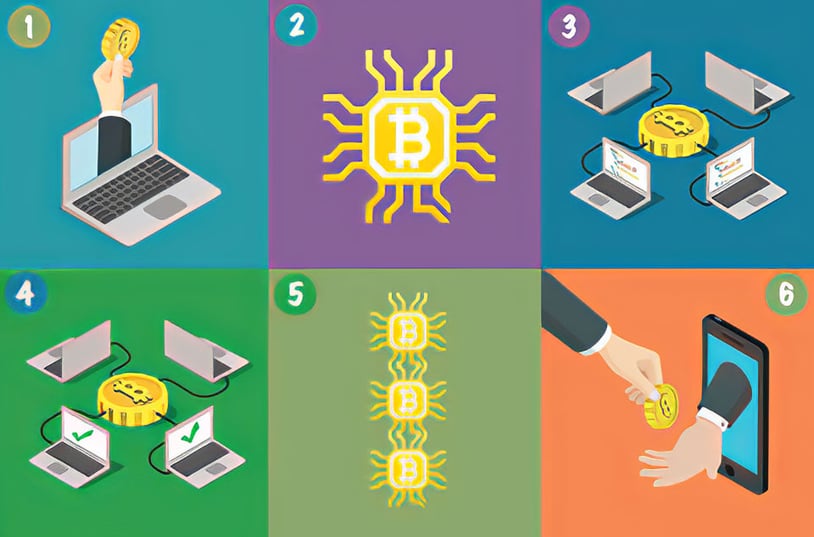 1) Someone wants to send money to someone else.
2) A block is created online to represent the transaction.
3) The new block is broadcast to all blockchain miners in the network.
4) The miners approve the transaction and validate it.
5) The block is then added to the blockchain, providing a permanent record. At this point, the transaction is valid. All miners receive a copy of the updated blockchain, making any discrepancies quickly evident.
6) The recipient receives the payment.

Where is blockchain used?

The best-known use of blockchain technology is in Bitcoin, a "cryptocurrency" that allows users to send and receive money electronically. Bitcoin uses blockchain technology to maintain a ledger of every Bitcoin transaction. A growing number of major businesses use Bitcoin, including Microsoft, Subway, and Whole Foods, as well as many small restaurants and traders. The total value of all existing Bitcoins now exceeds $20 billion (up from $2.7 billion in 2015), and millions of dollars are exchanged daily.

New Bitcoins are generated through a process called mining. This process involves individuals called miners, who use special software to "mine" blocks, or create the hash required to update the blockchain. Miners are issued a certain number of Bitcoins in exchange for this processing. Mining requires significant processing power to perform the hashing in order to conform to strict rules known as proof of work. The complex processing required to achieve the proof of work helps manage the rate at which Bitcoins are issued.

Hashing algorithms produce a fixed size output (called a hash code or digest), irrespective of the data being hashed. Bitcoin uses a secure hashing algorithm (SHA) with 256 bits (32 bytes) in its output, or SHA-256 for short. For example, the SHA-256 hash of "International Society of Automation" (35 characters) is:

and the SHA-256 hash for "Automation Federation" (21 characters) is:

The very first block in the Bitcoin ledger (called the genesis block) has the hash:

In the proof of work process, the miner is presented with a number of pieces of data, including the SHA-256 hash representing the previous block in the chain; details of the current transactions to be processed, such as a timestamp (created by the miner); and information pertinent to the transactions themselves. The miner combines all this data into one hash. This is referred to as the challenge. The miner's task is to produce what is known as a proof, such that the SHA-256 hash of the challenge and proof results in a hash that has a fixed number of leading zeroes (out of the total 256 bits in the hash).

Due to the unique one-way nature of hashing algorithms, the only way the miner can determine the proof (also known as nonce, a term commonly used in cryptography for a number that is used only once) is to try all possible permutations until an answer is found. The number of leading zeroes in the hash determines the number of possible permutations. For example, if it were necessary to have the first 40 bits of the hash as zero, there would be approximately 1 trillion possible combinations (240). Varying the number of zeroes halves or doubles the amount of work (239 = 549 billion, 241 = 2.2 trillion).

In Bitcoin, the proof of work is designed to take approximately 10 minutes to perform. At present, this results in a hash with 18 leading zeroes, or 262,144 possible permutations (218). Once a miner determines the proof, the resulting hash is stored in the transaction block, and this hash will be subsequently used in the processing of the next block.

The reasons why blockchain technology can successfully manage $20 billion of currency are also reasons why it can be useful in other transaction management applications:

Bitcoin has perhaps gained more notoriety than respect from the general public to date, because hackers have used it to collect their fees from ransomware attacks. Bitcoin transactions involve transfers between anonymous addresses, and the lack of central control makes it difficult, but not impossible, to trace. However, blockchain technology can be a force for good.

Blockchain technology is already being used in a wide variety of industries. More than $500 million was invested in venture capital-backed blockchain companies in 2016. Some high-profile applications include:

Closer to home, IBM is working in partnership with Samsung to develop a decentralized Internet of Things (IoT). Autonomous decentralized peer-to-peer telemetry (ADEPT) uses blockchain technology to secure transactions between devices. IBM and Samsung are planning networks of devices that can autonomously maintaining themselves by broadcasting transactions between peers, as opposed to the current model of all devices communicating only with centralized, or cloud, services.

Central to this concept is the registration of IoT devices in a publicly maintained blockchain, creating a level of trust that cannot be achieved for rogue devices.

Blockchain in the ICS world

Blockchain technology has other potential applications for ICS, such as the protection and verification of device firmware and application software updates. As ICS users have secured their networks, attackers have taken to other methods to infiltrate systems. One such method involves inserting Trojan malware into ICS software that is downloaded by users for installation on their networks. In 2014, a variant of the malware Havex contained code that scanned networks for OPC-aware devices. It then collected information on the tag configuration and uploaded it to an external server. This Trojan was found in downloadable software on ICS vendor websites. Registering firmware and software in a blockchain could provide an immutable record of code, making an attack like the Havex OPC example impossible. Other potential ICS-based applications are:

One of the challenges for the non-Bitcoin blockchain solutions is that a key benefit of a truly distributed ledger is only achievable if there is some obvious financial gain for miners. The above examples, such as the ICS firmware or software ledger, may only be achievable with a private (e.g., run by one ICS vendor for their products only) or consortium blockchain (perhaps managed by a collective of ICS vendors). In this application, there may still be some concerns about the security of the ledgers, but in the case of ICS firmware and software verification, a private or consortium blockchain would still provide significantly more assurance than existing methods.

As with all disruptive technologies, it is impossible to predict with certainty what will happen. All we can do is watch this space. What is certain is that blockchain technology is not going away anytime soon.

About the Author
Steve Mustard, author of the ISA book, Mission Critical Operations Primer, is an independent automation consultant and subject-matter expert of ISA and its umbrella association, the Automation Federation. He also is an ISA Executive Board member. Backed by nearly 30 years of software development experience, Mustard specializes in the development and management of real-time embedded equipment and automation systems, and the integration of real-time processing, decision-support and other disparate systems to improve business processes. He serves as president of National Automation, Inc. Mustard is a recognized authority on industrial cybersecurity, having developed and delivered cybersecurity management systems, procedures, training and guidance to multiple critical infrastructure organizations. He serves as the chair of the Automation Federation’s Cybersecurity Committee. Mustard is a licensed Professional Engineer, UK registered Chartered Engineer, a European registered Eur Ing, an ISA Certified Automation Professional (CAP) and a certified Global Industrial Cybersecurity Professional (GICSP). He also is a Fellow in the Institution of Engineering and Technology (IET), and a senior member of ISA.

About the Author
Mark Davison is a software engineer with more than 30 years of experience. Currently he is an owner/director of Terzo Digital, a software consultancy firm specializing in IoT and telemetry. Davison is a current committee member for the Water Industry Telemetry Standards (WITS) Protocol Standards Association, helping to develop new standards in the IoT arena, aimed at more than just the water industry.