END_OF_DOCUMENT_TOKEN_TO_BE_REPLACED

In 2007, the Automation Federation (AF) delegation told an audience at the Employment and Training Administration (ETA) about the people practicing automation careers in industry. Not long before our visit, the ETA, part of the U.S. Department of Labor (DOL), had worked with the National Institute of Standards and Technology (NIST) to develop a “competency model” framework based on the needs of advanced manufacturing.

The ETA was eager to engage AF and ISA to use our tiered framework to develop a competency model for the automation profession. After developing the preliminary model, hosting subject-matter expert (SME) meetings facilitated by the DOL to finalize our work, and then testing the model with several automation managers against their own criteria for validity, we rolled out the Automation Competency Model (ACM) to educators, government, and industry in 2008.

Since then, it has been a tool for educators and parents to show students what automation professionals do, management to understand the skill sets their employees need to be effective and to use as a tool for gap analysis in reviews, program developers to create or alter curricula for effective education and training, and lawmakers to understand how U.S. manufacturing can be globally competitive and the jobs needed to reach that goal. 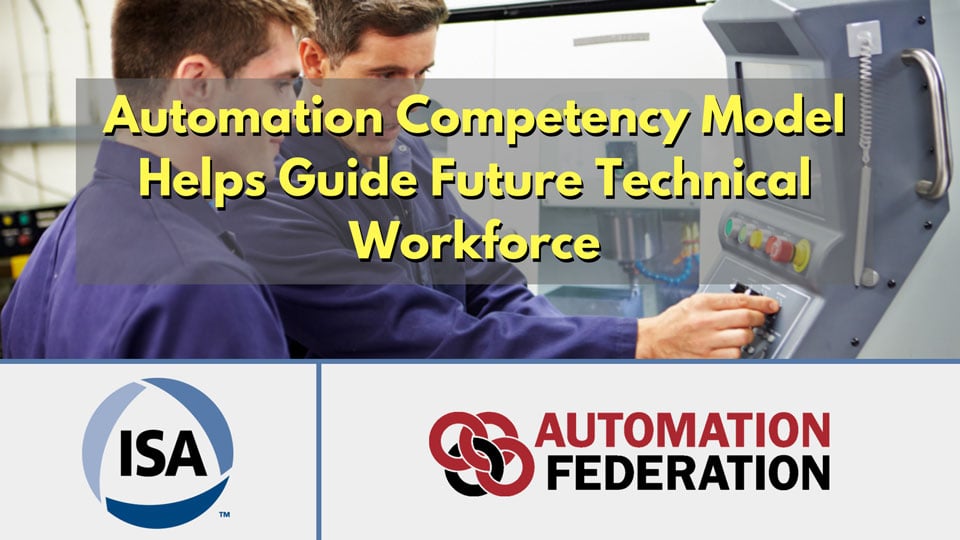 In the lower tiers, the model identifies necessary soft skills, including personal effectiveness, academic, and general workplace competencies. Automation-specific work functions, related competencies, and references (e.g., standards, certifications, and publications) are detailed in tier 5. In short, the model stakes out our professional territory and serves as a benchmark for skill standards for all aspects of process and factory automation.

Previously, parts of the academic community and some U.S. lawmakers and agencies had the misconception that industrial automation and information technology (IT) are synonymous. Although there has been some convergence between IT and operational technology (OT), much of that perception has changed. OT-based industrial automation and control systems (IACS) were a focus in the recent cybersecurity framework development organized by NIST in response to the presidential executive order on cybersecurity for critical infrastructure.

The ACM has been a great tool for the AF to use to draw new organizational members and working groups, who visualize the big picture in automation career development. Also, we are telling our story and forming partnerships with science, technology, engineering, and math (STEM) organizations such as FIRST and Project Lead the Way. Since forming in 2006, AF now has 16 members representing more than 500,000 automation-related practitioners globally.

After two three-year critical reviews, the ACM is still the most downloaded competency model on the DOL website. As a result of our work in creating the ACM and the IACS focus in cybersecurity framework meetings, the DOL asked AF to review a heavily IT focused Cybersecurity Competency Model. After adding IACS content and the philosophy of plant operation (versus IT) cybersecurity, the model released was a much stronger tool with wider applicability. ISA, as a member of the American Association of Engineering Societies (AAES), presented the development of the ACM to AAES leadership as a way to provide tools for lifelong learning in the engineering profession. AF/ISA was once again invited to work with the DOL and other AAES member societies to lead in developing an Engineering Competency Model.

The model framework and our experience in ACM development enabled us to identify the front-end skills, necessary abilities, knowledge to be developed, and academic prerequisites for any of the disciplines, plus industry-wide competencies from the perspective of all engineering-related plant functions: design, manufacturing, construction, operations and maintenance, sustainability and environmental impact, engineering economics, quality control and assurance, and environmental health and safety—with emphasis on cyber- and physical security, and plant safety and safety systems. Now the societies dedicated to each vertical discipline listed in tier 5 will begin to identify all critical work functions, detail all competencies within each function, and note the reference materials.

It is important for the participants to see the big picture, consider the future, and keep an open mind; agreement typically comes easily when SMEs participate with that mindset. Once the model through tier 5 is complete, job titles and job descriptions are created. When the DOL accepts the model, the U.S. government officially recognizes these positions. We hope the emerging Engineering Competency Model will be a great tool to address the overall skilled worker shortage.

If the automation model is any indication, the new engineering model will have a large impact on achieving the skilled workforce goal.

About the Author
Stephen R. Huffman is vice president, marketing and business development, at Mead O’Brien, Inc., and chairman, government relations committee, at Automation Federation. He has a 40-year history of optimizing process systems, developing new applications, and providing technical education. He served as 2007 president of ISA.