APC: What’s in an Acronym?

END_OF_DOCUMENT_TOKEN_TO_BE_REPLACED

APC: What’s in an Acronym?

This guest post was authored by Jim Ford, a senior consultant with MAVERICK Technologies, a Rockwell Automation company.

I closed my first advanced control loops on a cat cracker debutanizer in 1980. The platform was Honeywell PMX computer control software running on a TDC 4500 mainframe on top of early-release TDC 2000 – a real workhorse combination for 20 or more years. The controls maintained the LPG product heavy key spec while maximizing separation – and it worked pretty well, if I recall. 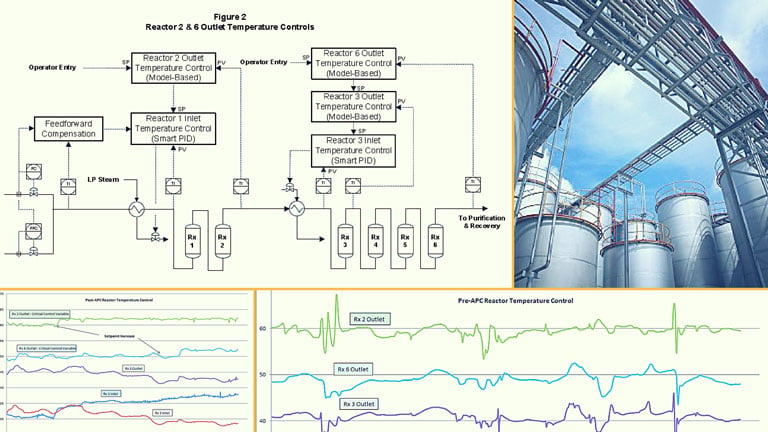 We called it advanced process control – APC. Did the controls utilize dynamic models, like today’s model-predictive control (MPC) software? No, not really. We did utilize dead time and lag compensation blocks for conditioning of all feedforward variables (FFVs) based on step tests that identified the responses of the controlled variables (CVs) to changes in the FFVs. So, you could say some of what we were doing was model-predictive. And, we did something that MPC doesn’t do even today – we made the sensitivity between the FFV and the manipulated variable (MV) adaptive. In other words, if the reflux/feed ratio was different yesterday than it is today, then the feedforward action applied to the reflux as a result of a change in feed rate should be based on today’s reflux / feed ratio – not yesterday’s! Pretty profound, don’t you think?

So, nowadays, I’ve been told I’m not supposed to call a control “APC” unless it utilizes MPC. To that I say “bull hockey!” One of my colleagues and I recently implemented a set of APCs (dare I use the term!) on a series of six fixed-bed catalytic reactors in series. The critical control variables were the reactor temperatures.The catalyst was extremely heat-labile – just a slight high-temperature excursion of a few degrees would deactivate the catalyst. At the same time, the temperature had to be kept high enough to promote the reaction – and, the reaction was quite exothermic! We had two MVs to work with: a pre-heater for the first reactor feed and a cooler for the third reactor feed. 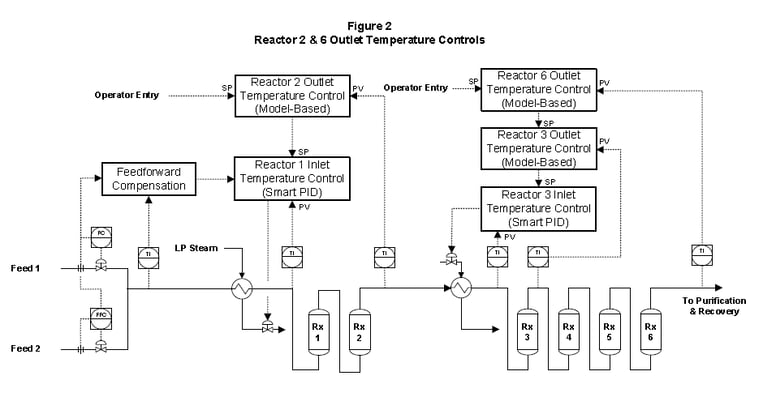 The results of the control improvements can be seen in these before-and-after trends: 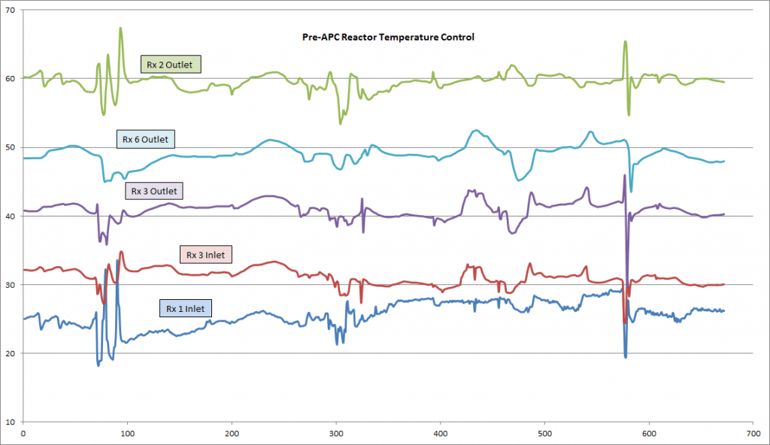 These controls have resulted in savings of millions of dollars per-year in catalyst cost for our client. So, don’t tell me I can’t call this “APC,” just because I didn’t use MPC! APC is any control strategy that utilizes multiple inputs and outputs to achieve higher-level control objectives and that involve functions not normally represented on P&IDs. We can differentiate it as a sub-set of APC, and call it ARC, but it’s still ADVANCED process control. It still has wide application throughout the process industries, especially in refining, chemicals and petrochemicals, and should always be considered a lower-cost and more easily maintainable solution when compared to MPC for many important control and operating problems.

As I said in a paper I wrote a few years ago:

“Our customers and employers will be best served by a pragmatic, process engineering-based approach to APC design that applies the specific control technology most appropriate to achieve the desired control and operating objectives at lowest cost and with the greatest probability of long-term durability and maintainability.”

It’s still APC, even if it ain’t MPC! So, what is in a name? Your feedback is welcome.

Jim Ford, Ph.D., is a senior consultant with MAVERICK Technologies, a Rockwell Automation company. He has 36 years of industry experience including 28 in the field of advanced process control (APC) for domestic and international clients in the refining and chemical/petrochemical industries. Jim earned a bachelor's degree in chemical engineering at the Georgia Institute of Technology. He went on to earn master’s and doctorate degrees in chemical engineering at Tulane University, and later an MBA at Syracuse University.